On TVM last Wednesday lawyers Manuel Mallia and Robert Musumeci had a lesson for me. If I’m serious about the ‘rule of law’, then certainly I can’t expect that people are punished according to my instincts or emotions. Everyone, whatever they’ve done, is entitled to due process and punishment is only handed down after judicial certainty.

Sometimes I wonder if they think that just because I don’t have a law degree, they need to speak to me very loudly, in mono-syllabic words and keeping verbs in the infinitive like I’m just down from the trees. Do I look stupid or is it something I said?

Anyway, I grant the warranted lawyers the fact they are in possession of esoteric knowledge way above my emotional intuition.

What would they have to say about this? A man drove a bus into a tree. Two people died. Thirteen people got injured. The driver may have been drunk or under the influence of drugs. That’s it. Not exactly a mystery for a TV detective: nothing that will get Chief Inspector Morse out of bed, that will make Hercules Poirot speak in cockney, or that will force Sherlock Holmes to play the violin.

The accident happened in Żurrieq in April 2018, coming up on 3 years ago.

It took the inquiring magistrate all this time to wrap up her inquiry report. There was no waiting for replies to cross-border letter rogatory, no struggles through diplomatic complexities, not much to do beyond measurements and photographs taken on site on the day of the accident and waiting for toxicology results from the driver.

And the police, though they didn’t have to, waited for the inquiry to close before pressing charges even though a chunk of the stuff they threw at the accused is now beyond the statute of limitations.

It has literally taken longer for this case to be brought in front of a court than the law allows.

I’d have loved to have had this example in mind when Robert Musumeci and Manuel Mallia were mocking my impatience and my infantile emotional frustration at the delays in getting anywhere in Daphne Caruana Galizia’s case. Because of course it is extremist, as Jason Micallef would have you believe, to want timely justice in Daphne’s case.

Suffice it to say that evidence against Yorgen Fenech is being heard at the spectacular rate of some 6 hours every 3 or 4 weeks because the magistrate presiding the compilation of evidence has a normal workload in which the trial against the alleged mafia boss who killed a journalist to keep his billions is processed at the same rate as every other case she’s expected to go through.

I’m all for due process. I just think what we have here is ridiculously under-resourced, inefficient and often of poor quality. I don’t know how busy the magistrate who wrote the inquiry report into the bus accident that killed two people almost three years ago in Żurrieq was with other cases, but whatever it is that’s causing this, yet another injustice has been perpetrated by institutions that do not work.

I have no reason to believe the delay in the Żurrieq double decker bus case is grounded in corruption or fear of the mafia, as Daphne’s case is. I don’t know enough about the matter to have that sort of suspicion. I just know this isn’t working. Many waxed melodramatic accusing this cartoon by Burlò of poor taste. It was done at the time, a bloody reminder of the mediocrity of this country that less than six months earlier killed Daphne Caruana Galizia. How prescient it was. 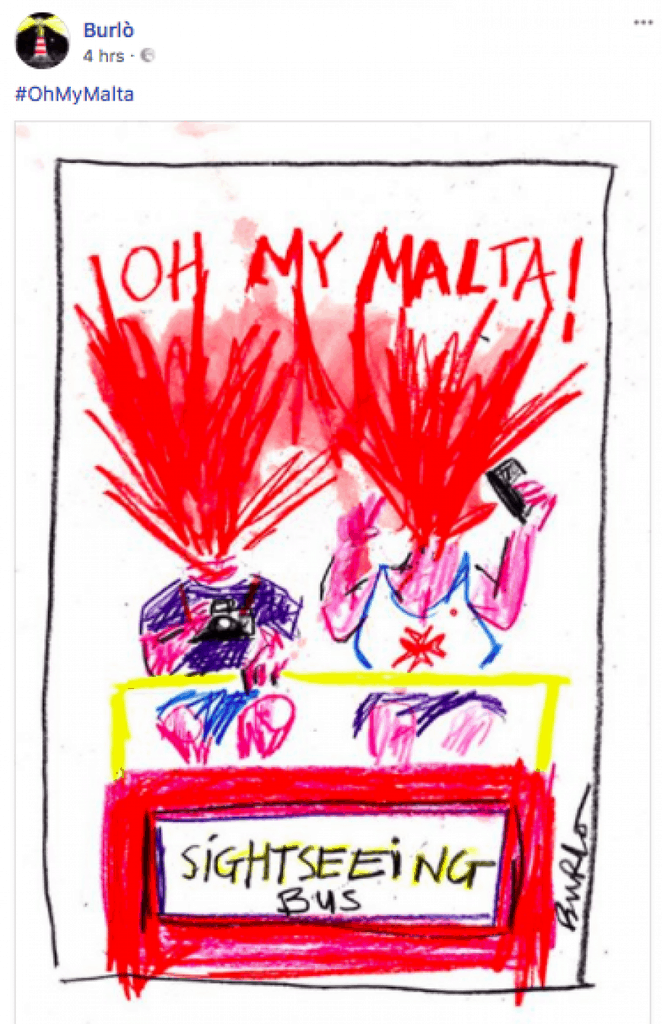 And next time I see another article by Edward Zammit Lewis like the one he published today publicly sucking his own dick and farting in our general direction about how he’s revolutionised the justice system, I swear I’ll scream in the street.