The following is an extract from a speech Alfred Sant gave in Parliament during his last days as Leader of the Labour Party. The speech is from 12 May 2008. Alfred Sant had just lost his third election in a row after 1998 and 2003 and he would be replaced a few weeks after delivering this speech. On 6 June 2008, the husband of his secretary would succeed him. The Joseph Muscat era would start.

Through the thin crust of a personal apologia, of the attempt to couch his fears for his own party in criticism of his partisan rivals, of the false hopes that sounded right in the context but are completely hollow now, Alfred Sant here speaks of the barely visible monster he sees creeping in to corrupt and to capture the soul of the Labour Party.

At the other chronological end of Joseph Muscat’s political career, and still deep in the ideological agnosticism and amoral cynicism of the Labour Party, Alfred Sant’s words from 2008 do not read as admirable prescience or even as a momentary lapse of honesty in a career of disingenuous hypocrisy.

Alfred Sant’s words from 2008 read like the dreadful omens of a narrator at the opening of a tragedy, who promises there will be no reprieve, no final victory for the just, no ending but the indigestion of a monster who has come on stage and eaten up the good guys. 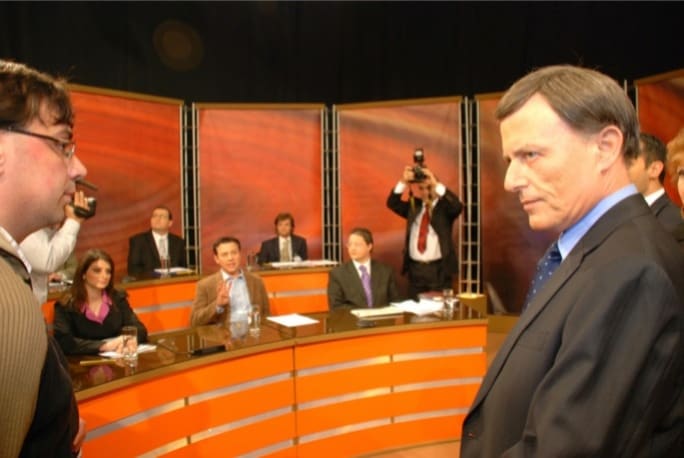 Our country’s democracy is facing a new threat. There’s a web of power that has spread around us made of people that do not appear on the front line of our politics but control large public and private resources. Their focus is to ensure that major decisions in the country are taken in line with their objectives and interests. This web of power is made by highly influential people in business, in political organisation, in the media and in the professions. These people live well. They live better than the great majority of other citizens. This is a web of power that suckles on the structures of the State where the abuse of power and corruption are secondary to the need to safeguard the power of the web.

Mr Speaker, no doubt the usual choirs will raise their voices to accuse me of throwing mud or conjuring imaginary scenarios. These choirs have long worked for these interests. They are their agents and they are guided by the web of power. But the truth remains true, even if you choke it or prevent it from being heard or understood. Whatever they say, one of the most important objectives of today’s politics is to create diligent and transparent leadership, with zero tolerance for corruption and abuse of power, one hundred per cent committed to good governance. Diligent and efficient leadership with integrity, based on merit; leadership that is fair with all citizens and that responds to the wishes of the majority of citizens, not to the interests of the power web. I go beyond this. The Nationalist Party has also been undermined by the web of power.

The Nationalist Party has been gripped by the power network that has easily transformed it into a brand. It is now but a representation of the values of a small number of people instead of the values of a wide range of citizens brought together by these principles. There will be some who would say that the important thing is to win and that you need the branding to win in politics. I cannot rule out that the web of power might try to colonise the Labour Party in the same manner, to manipulate it in the same fashion that it has colonised and manipulated the Nationalist Party. If that happens, the country will be made to believe either party that the web of power wants it to believe according to its interests.

I do, however, strongly believe in the internal strength of the Labour Party and its ability not to be tempted to become a tool for the web of power to win a general election. Quite the contrary. I believe that in the future, the Labour Party will continue to bear witness to its beliefs and to its commitment to genuine democracy, in favour of leadership for the country that truly reflects the strongest democratic aspirations of all citizens and not to be a servant for the powerful interests of the few, strong and tightened in a fist. This is even more important because, in the last years, ugly division in this country has been aggravating.  When 16 years ago I was first sworn in as Leader of the Opposition by the president at the time, Dr Ċensu Tabone, I had declared it was wrong that in our country, led by a government from one side, the other side’s half of the population always felt excluded from public life.

I had also said how important it is for our country to give everyone the sense that this country truly belonged to them. Between 1996 and 1998, we tried, as a Labour government, to bring this about. But those efforts faced opposition by vested interests determined to prevent change. Through sabotage, they managed right up to the unfortunate extent that our efforts led to counter-productive outcomes. We should not give up. Even so, I must say that division within our people today is not merely still there. It runs deeper. The division now splits amongst themselves people of a Nationalist persuasion. Among these are people that feel excluded, except when an election comes along and an effort is made to shut them up.

Previous:The PN shows the way on prison reform
Next:WATCH: Interview with 103 on The Third Siege of Malta