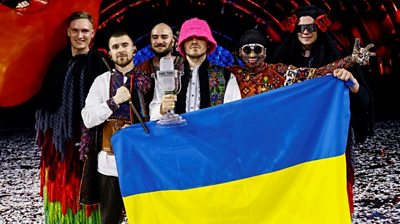 I couldn’t be dragged in front of the Eurovision broadcast even if I had been in chains. The only fun bit is the voting at the end because it’s a bit like watching a regatta, but it’s way too late into the night for me.

Since the winner is chosen mostly by popular vote a sympathy vote for Ukraine was expected and welcome. It was a popular way of showing Vladimir Putin the finger. Voting Ukraine in the Eurovision is not the same as a military response to aggression but Putin can’t have enjoyed it which makes it a nice start.

I don’t mean to suggest Ukraine’s entry wasn’t good – I did not hear it, and if I did I wouldn’t know anyway – but I doubt the quality of the song would ever have mattered. No song could be bad enough to quell the swell of sympathy. And if they sent that little girl filmed singing Disney’s Let It Go in an air raid shelter in the opening days of the invasion, tribes living in trees of jungle-covered islands of the Indian Ocean as yet untouched by civilisation would have joined the EBU just to vote for them.

There are exceptions of course. Serbia has been an enclave of Russian culture and influence for centuries. There is deep ethnic, linguistic, and religious affinity between Serbia and Russia. The political connections run so deep that Serbia jeopardised its progress to EU accession by refusing to condemn the invasion.

The other exception is North Macedonia which shares some of those ethnic, linguistic, and religious affinities and itself includes a considerable Serbian population, descendants of centuries-old migration and more recent Serbification during the years of Yugoslavia.

‘Russia v the West’ is a philosophical divide that lies beneath the dynamics of Serbian and Macedonian politics, and the present war is being fought in the disinformation struggles on their media.

This is not a profound study of the anthropological reasons for the way Serbians and Macedonians voted in the Eurovision. There are complex nuances that cannot be captured in this article and which in any case are not the subject of this article.

The subject of this article is the third exception to the near unanimous douze points of popular solidarity shown towards Ukraine on Eurovision night: Malta.

Why does it not occur to the majority of people, the sort that bother to vote on something like the Eurovision, that they should “vote politically” and give Ukraine a little boost? I put “voting politically” in quotes because that is the misnomer given to predictable voting behaviour at the Eurovision, neighbouring countries mutually handing each other their top votes to keep things en famille as it were.

I’ll say it. What the bloody hell is wrong with us? What’s our excuse? Are we so in awe of our politicians that we are sooner influenced by their self-centred cries of ‘neutrality’ than to be able to feel for the suffering of unarmed civilians under air attack? Have we deafened ourselves to the screams of migrants drowning in our waters that we can no longer recognise human suffering in any form?

Ironically I’ll be told the Eurovision vote is unimportant. And yes, I suppose it is. I mock people for taking the Eurovision too seriously all the time, and frankly, from my point of view, turning the telly on when it’s happening is already taking it more seriously than it deserves.

But given one, inexpensive, barely committing, hardly any effort required, opportunity to join the rest of Europe in a chorus of practically unanimous expression of basic human solidarity we turn the other way.

It seems inevitable then, as the annual pre-Eurovision pundits predict about their favourite competition every year, that the next Pope will be Maltese. God wouldn’t have it any other way. If He knew what’s best for him.