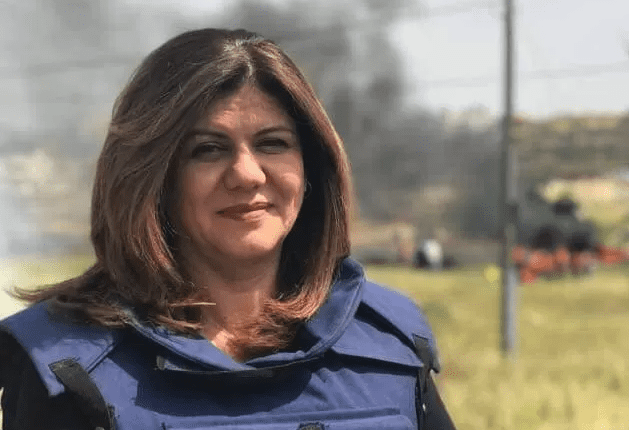 I had not heard of Shireen Abu Aqla before she was killed. When I first heard of her death I thought it was sad that another war reporter found themselves between a bullet and its intended target.

Then I heard an interview with her former boss who explained that that morning she wasn’t on some battle front. She was covering a police raid. She wasn’t embedded in any front. She was standing at what should have been a safe distance. It felt like she was killed not only because she was there. She was killed because it was her.

Then I saw images of her funeral yesterday. I saw riot police beating mourners, even the pallbearers who couldn’t have possibly been of any threat to the police officers unless they were going to toss the coffin at them.

I didn’t know of Shireen Abu Aqla in her life. But now she’s dead, she is, to me at least, bearing witness to the conduct of the Israeli authorities on territories they have unilaterally annexed or occupied.

It is an inconvenient testimony. I often look away from what happens there though it is in such close proximity to us. I hold the view that Israel has a right to exist and the right to take necessary measures to ensure that existence.

On that basis I half-consciously dim in my mind the daily stories of discrimination and brutal violence inflicted on Palestinian civilians purely because of the inconvenience of their race, their culture, their heritage, and the geography of their ancestry. I dilute the severity of what is going on, soften it by dismissing the accusations as ‘he said, she said’ and telling myself I don’t know enough to apportion responsibility.

I keep an attitude of self-imposed neutrality, justifying it to myself by saying I can’t possibly know enough to say who’s wrong or who’s right.

Shireen Abu Aqla is far from the first journalist to be killed on the line of duty in that blasted country. She’s a woman, English speaking, Christian: she overcomes my barely conscious but no less determining prejudices that decide what I pay attention to and don’t, cultural proximity, perceived gender vulnerability, even vague familiarity by association. Shireen Abu Aqla was approximately Daphne’s age when they were both killed.

Once again I find that a journalist – a fearless woman who dedicated her life to the telling of the truth – must first die before I wake up to the atrocities she has reported on all her life.

The intuitive thing to say is that those responsible for her killing must be held to account. Of course, they must. But that’s easy for me to say. It’s no better than a platitude.

The real change I can make is to shake myself out of the lazy neutrality, the ambivalence of distance, to stop trying to find a midway point between people carrying a coffin and people beating them up. I owe it to Shireen Abu Aqla that what I didn’t do in her life I can at least start doing now, open my ears to the story she tells.

Because like journalists killed anywhere she tells the story that the man with the gun who shot her didn’t want me to hear.