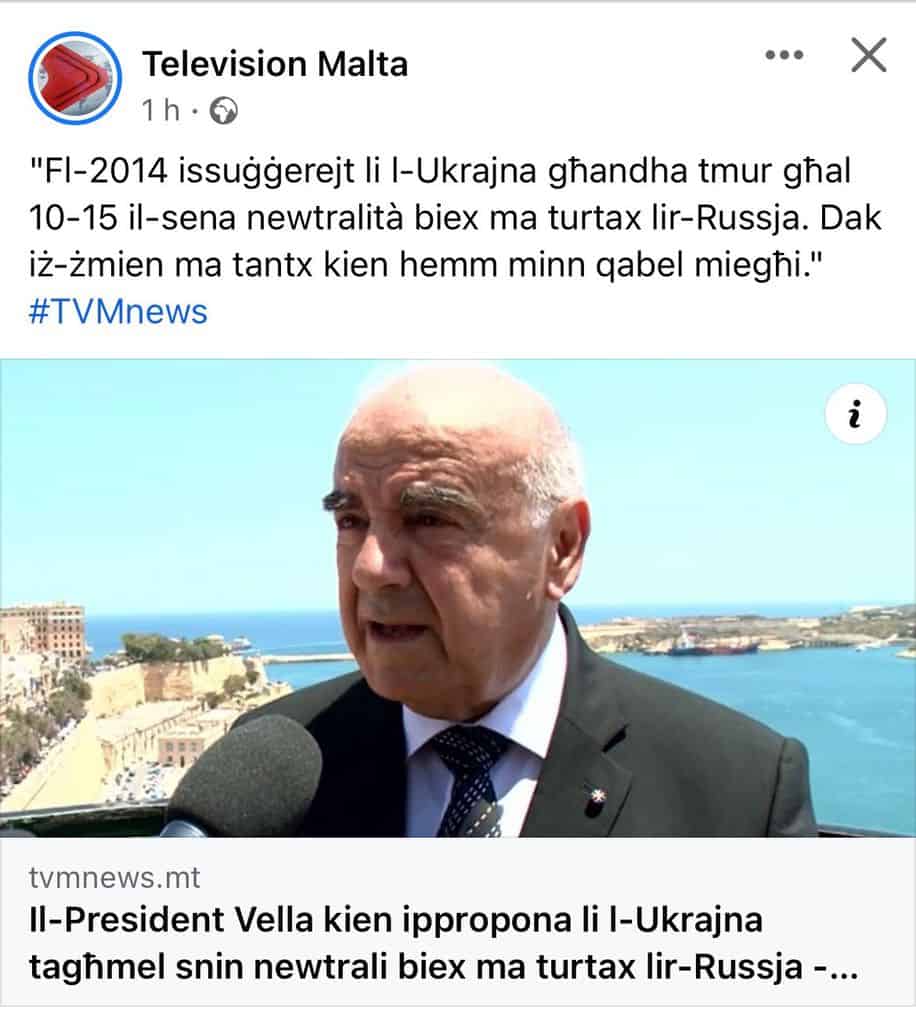 Perhaps President George Vella doesn’t see the contradictions in his remarks, nor indeed, the fact that implicitly he is blaming Ukraine for having been invaded by Russia. But that’s no excuse.

George Vella is quoted here by TVM making two comments. I am translating them.

In 2014 I suggested that Ukraine goes neutral for between 10 to 15 years to avoid irritating Russia. Few agreed with me at the time. (Irish) President Higgins agreed with me, and one cannot rule out finding a way to use neutrality as a tool to bring about some sort of peace.

He is then asked about Finland’s decision this week to abandon neutrality and apply instead to join NATO. On that he said:

On the matter of neutrality; every country will have their totally different reasons. I cannot comment on the choices of a sovereign people. If that is what Finnish people choose good luck to them but one ought to think about whether this is the right time.

The people of Finland are indeed sovereign and have a right to choose whether to enter alliances or remain neutral. Why does George Vella think the people of Ukraine do not have the same right? Does he accept Vladimir Putin’s argument that Ukraine is a fictitious construct and he has a right to decide their political choices for them?

The notion that Ukraine irritated Russia, by, for example, not taking up George Vella’s 2014 suggestion, fits neatly in the idea that Russia did not unilaterally invade Ukraine and start an unjustified and illegal war on its neighbour’s territory, but rather that Russia responded to a threat to its security as an inevitable consequences of the choices of its neighbour.

George Vella blames the victim. He thinks Ukraine should have worn longer skirts if it didn’t want to excite Russia into raping it.

Though George Vella remembers that it is not his place to tell people living in democracies the fate they choose, his snide remark that after Finns have made their choice “good luck to them” and that they should have thought harder on whether this was the right time is nothing short of a warning that now that Finland is wearing a short skirt it should know what to expect.

What people who argue for neutrality never seem to shed is their profoundly irritating smugness in their safe distances. The people of Finland have seen Russia march into Ukraine unprovoked. They share a border with Russia, they have been historically occupied by Russia, they have fought a war of resistance with Russia before.

It is certainly true that eventually, after much blood and destruction, one of the elements of the end of the war in Ukraine will be its agreement to renounce its right to join NATO. It has already loudly sounded its willingness to concede the principle. It will not be the greatest of the losses suffered by that country and its people while Vladimir Putin pursued his bloody policies.

The last thing they will need when that happens is the smug president of smug self-interested Malta to tell them he told them so. George Vella is clearing his throat and training his wagging finger.

Previous:Where’s a cop when you need one?
Next:Court orders liquidation of Keith Schembri’s film-making company