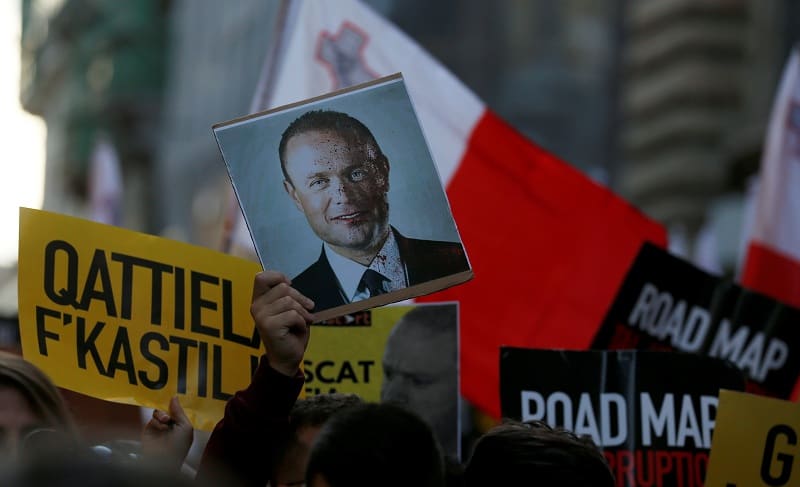 Multiple sources in premier league football clubs have reported to this website receiving calls from Robert Abela’s staff to warn them against hiring Joseph Muscat as chief of the professional clubs’ association. OPM staff are reported to have told leaders of the footballing world that should they support Joseph Muscat in this election they would struggle to find the support of government for their projects should they come to need it.

Football club chiefs and some of their club committee committees have also been told “you’ll ruin the country” if Muscat, who resigned in disgrace from the prime ministership after a raft of scandals and proximity to the plot to kill journalist Daphne Caruana Galizia, is placed in a strategic position in the sports world.

The sources said Robert Abela staffers reminded them that Malta had only just emerged from the FATF’s grey-list and the return of Joseph Muscat to public life would bring back international scrutiny on Malta. Decision makers in Malta’s top 14 football clubs were warned they would also need to expect their bankers to tighten their scrutiny or renounce their business altogether if they become too closely associated with Muscat.

Meanwhile MFA sources told this website they are extremely concerned about the prospect of Joseph Muscat’s election. The MFA has in the past encouraged the top tier teams to set up their own association and to hire an outsider who would appear to all participating clubs to be unbiased towards any one of them. The association’s decision to drop the rotational system of having club presidents taking turns leading the association was welcomed by the MFA as a step towards professionalisation.

But sources in the national federation say many in the organisation are appalled at the prospect of Joseph Muscat taking over. They cited two reasons. The first is that the MFA had encouraged the clubs to form an association to be able to pitch collectively in UEFA funding programs and to negotiate TV rights with other small football jurisdictions. However, the presence of Joseph Muscat in such negotiations would raise alarm bells with any counterpart doing even the most superficial due diligence.

“It would be better to have no association at all than to have one led by Muscat,” one source told this website.

The second concern for MFA staff is that Joseph Muscat as president of the clubs’ association would likely make a pitch for a full seat on the MFA committee, perhaps eventually its presidency. That would “cement Maltese football’s terrible reputation for corruption,” the MFA source said.

Joseph Muscat is mobilising his own side to counter pressure from Robert Abela’s people and secure his election to the position in the association. Multiple sources in football clubs have reported receiving calls from former senior henchmen of Joseph Muscat who held top positions in the Labour Party and the government when he was prime minister. Many of the officials making these high-pressure calls had been removed from office by Robert Abela in a clean-up of Joseph Muscat acolytes.

Their presence on this campaign suggests that Joseph Muscat plans to graft elements of his old government team behind some of the worst corruption scandals in Maltese history on to Malta’s football world.

The proposal to appoint Joseph Muscat came from the outgoing president of the association Robert Micallef, who is the president of the Santa Luċija football club, and Jesmond Abela, known as “il-hutch” a committee member and long-time driver of Paola’s Hibernians.

Both Micallef and Abela are reported to have been vague about any specific intentions Joseph Muscat has for the association and have mostly argued that Joseph Muscat’s qualities “are just what Maltese football needs right now.”

Although there have been vague references to the notion that Joseph Muscat’s election would bring new money to the mostly cash-starved clubs, no concrete proposals are yet known. Joseph Muscat’s proponents in the association say he has, however, proposed abolishing the association and converting it instead into a limited liability company. The motivations for this change remain unclear.

The vagueness on Joseph Muscat’s intentions has fuelled speculation on what his real intentions might be. A source said that some activists in the football world have suggested Joseph Muscat’s pitch may have something to do with Izibet recently winning a 10-year concession for the lottery monopoly.

The source said that those who suggested the lotto monopoly may be the cause of Muscat’s bid recalled that Izibet’s owner Johann Schembri is “very close” to Joseph Muscat. This website has been unable to verify independently the nature of their relationship.

But a source who belongs to a premier league football committee but is not a president suggested to this website that it is by no means certain that Joseph Muscat would win a secret ballot of the presidents if this was held.

The statute of the association does not provide for secret votes, but it doesn’t rule them out either. The source told this website that in view of the pressure coming at the clubs from the Robert Abela and Joseph Muscat camps, only a secret vote could really determine the wishes of the club presidents.