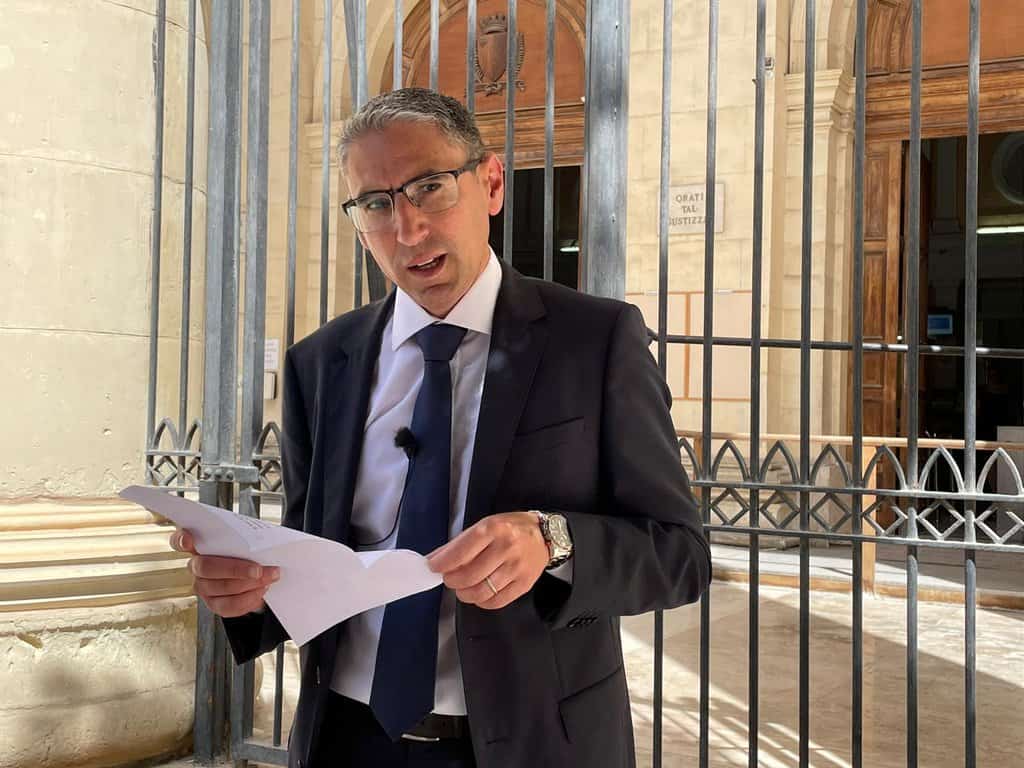 A few days ago, the shadow minister for home affairs, Joe Giglio, was asked questions on a radio show about his thoughts on Pilatus Bank, given that its owner and directors used to be his clients, and now he’s shadow minister speaking for a party that used to have the view that Pilatus Bank was a hub of money laundering.

What happened after that is still fresh in many people’s memory. Amid shitting on the whistleblower who exposed his (former?) clients’ wrongdoing, Joe Giglio rubbished Repubblika for pushing for justice at Pilatus Bank.

Robert Aquilina, assisted by Jason Azzopardi, today filed in court a request for an order to the police to prosecute the owner and directors of Pilatus Bank. Repubblika’s reasons are not because they “believe” whistleblower Maria Efimova, as one might choose to believe the visions of Fatima. And Repubblika’s reasons are especially not to find a dramatic way of sending Joe Giglio packing.

Repubblika’s reasons are that it is aware that the republic of Malta has spent over €7 million on an inquiry into what happened at Pilatus Bank, and a magistrate has found more than sufficient grounds to order the police to act against Ali Sadr Hasheminejad and his co-conspirators. And Repubblika’s reasons are that it feels that 15 months since the conclusion of that inquiry are more than enough time for appropriate action to be taken.

So, why doesn’t Repubblika keep its nausea to itself and instead chooses to take direct action in court? People normally go to court (as opposed to being dragged there) because they feel some interest of theirs has been harmed or threatened. You may go to court to report some injury done to you, or to accuse someone of taking something from you that rightly belongs to you. Usually, therefore, some personal interest is involved.

What have Ali Sadr Hasheminejad and his co-conspirators taken from Robert Aquilina, or for that matter from anyone of the hundreds of paid-up members of Repubblika? What gives us the right to go to court to complain that, although a magistrate has found compelling evidence they committed serious crimes, the Maltese police have done nothing about it?

For some people this bit is hard to digest. We have been variously described as partisan, even treacherous. We have been labelled traitors, or an extreme faction of the opposition. Joe Giglio said we were unimportant, judging us by his own idea of importance, which he wrongly assumed we share. We flatter ourselves a little bit by borrowing the medal Miriam Dalli placed on the chest of our friends at Moviment Graffitti, and suggest the appellant “extremist” might have also been meant for us.

We do this for love of country. We place ourselves in the way of some very serious criminals with a lot to lose, money, power, even freedom, if the evidence found and documented by magistrates is taken to the logical conclusion contemplated by the law. If we win, they go to prison. There’s no pay day for us, unless it’s something the criminals we annoy imagine for us as just desserts.

When our actions highlight, for public awareness, the failure of our institutions, we don’t just embarrass them, if, of course, they were capable of blushing. Contrast Joe Giglio’s high praise of Angelo Gafà and his misguided confidence in the police chief, utterly unjustified by any evidence from the real world, with Repubblika’s action in court today, where we force the police chief to answer to a court why he has not brought charges against these documented, yet unconvicted for never having been prosecuted, criminals.

Robert Aquilina (and other leaders in Repubblika) see more of the court building than anyone who is not specifically paid to do so. Our activism in court is entirely uncertain of victory. With every step we take we are forced to justify our right to exist, never mind any legal standing we may or may allegedly not have to complain about some injustice or other. But our activism in court is never lacking in conviction.

We are not, in the narrow legal sense, victims of Pilatus Bank, because the entire country, its name, its international standing, its viability as an economic competitor, are damaged by the actions of its owner and directors. Too often in court the perverse logic is that, since everybody is a victim, nobody can really claim to be. Sometimes we manage to wade across that pool of mud. Sometimes, we must accept, we are sunk by it. No matter. We come back.

As active citizens in our community we cannot replace the police chief, the chief prosecutor, or some minister and his shadow who are neglectful of their constitutional obligations. But we can take time out of our lives to spur them on, to prick, if not their conscience, at least their virtually immovable arse.

It is a healthy modesty that reminds us to learn the lessons given by others, and as Salieri told Mozart in Amadeus, we often fail to place a good bang at the end of songs to let some people know when to clap.

Going to court to challenge the police chief to charge a billionaire serial bank fraudster, who has managed even to dodge the American federal justice system when he cheated their rules on blockading the economy of Iran, one of their worst enemies, is, after all, the legal equivalent of taking deckchairs off the Comino beach. Ali Sadr Hasheminejad has bullied Malta’s foremost newspapers into editing their reporting of his actions for fear of grave legal consequences that, perhaps, Joe Giglio advised him to take. Ali Sadr Hasheminejad slapped Daphne Caruana Galizia with a $40 million lawsuit in Arizona, where it would have been impossible for her to defend herself. That’s not going to scare us removing “his deckchairs”.

We fully expect the police chief and the prosecutor general to find ways of frustrating our efforts, and for the “deckchairs” to come back when we turn our backs. But as surely as criticism from a shadow minister or a minister is not likely to keep us awake at night, people in institutions who fail to do their job can be reassured Repubblika is not going anywhere anytime soon.

Someone must do this. Decisions are taken by those who show up. That’s why we were in court today.