On Wednesday, the Economy Minister, Silvio Schembri, presented 2 resolutions to Parliament’s National Audit Committee concerning the Żonqor-SmartCity land deal with the American University of Malta, the AUM. Pertaining to Robert Abela’s ‘new vision’ for the ‘university’, this deal is described as ‘giving back the land’ to the people, the catch being that the land originally belonged to the people before apparently being stolen and then returned to its rightful home by a benevolent prime minister dressed as Santa Claus.

Beware of leaders bearing gifts, particularly those who hobnob with car-dealing criminals charged with kidnapping while under investigation for drug dealing and money laundering.

Ironically (or not), it was car washing which featured in Silvio Schembri’s ‘charity event’ back in 2020, raising money to replace the cash which disappeared in a puff of smoke during the heady days of Blockchain Island. Maybe Christian Borg’s cars were borrowed for the occasion. 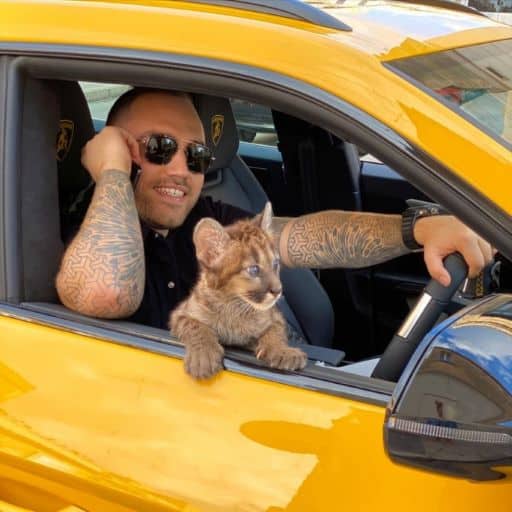 In terms of the ‘new deal’ AUM, according to MaltaToday, this will involve 31,500 m2 at Smart City being ‘leased to Sadeen Education for the construction of an AUM campus instead of the Żonqor site.’ All above board and shipshape then, in line with Abela’s promise of ‘transparency’ back in February: ‘Everything will be public, the agreement will be moved for parliamentary scrutiny, there will be no side agreements, we believe in the principle of transparency.’

In his statement, however, Abela admits to the existence of side agreements, referring to their casual removal as if he’s doing everybody a favour rather than articulating a taken-for-granted assumption if you’re dealing with a law-abiding government. All kinds of secret agreements were being negotiated during the setting up of the AUM. One of these was a secret Additional Agreement signed by the Houdini of crime, Keith Schembri, promising Hani Salah (aka Sadeen aka the AUM) additional land to the tune of 3,022 m2 at Żonqor ‘subject to a special parliamentary resolution’ which never actually took place.

Humble gratitude seems expected in response to Abela’s platitudes in the same way as claims of ‘listening to the people’ – made by both the disgraced ex-prime minister, Joseph Muscat, and his Capo of Continuity – were designed to elicit flag-waving adulation. You begin to wonder, and not for the first time, if all these magnanimous displays are simply empty gestures emanating from a theatrical extravaganza over something which was never intended to materialise from the start. After all, the boasts of the AUM’s ability to attract thousands of students never transpired, leaving the estimated 128 scholars rattling around in the historic building at Cospicua. Stuck in the middle of thousands of acres of Żonqor fields, their attempts to hold a decent sized rave would be a serious come down.

And let’s not forget that in 2019, Buster Beddingfield added his weight to the screams of ‘Give us back our land!’ The land he was adamant to rescue is St Paul’s car park – also being returned to the government in the socialist reappropriation of the People’s Republic of Malta. Let’s remember, too, that the land theft Beddingfield was decrying was spirited away by his own government who, obviously alert to the loudest voice in their Party, graciously decided to return what they’d stolen.

It’s easy to think all this is a stitch-up, isn’t it, with ‘news’ mapped out many years ago being delivered to the cheering masses?

In amongst the smiling displays of political benevolence, word has it that Hani Salah visited Malta for a week in May. Word has it that he came here to engage in secret negotiations with the OPM and government shareholders about the new deal to be presented to Parliament. For all Abela’s ‘transparency’, we’ve no idea what went on behind those closed doors. Perhaps they were having a giggle at our expense.

Questions as to whether there was ever a plan for the AUM to take over the Żonqor site intensify when you add the name of Kevin Deguara to the mix. Senior partner at DF Advocates – the legal advisers for Sadeen – Deguara is also one of the shareholders of the Shoreline Project at SmartCity where the AUM is about to relocate the assets of its Brave New World. Like everything touched by Malta government, ‘The Shoreline is synonymous with a serene lifestyle’ and ‘adopts a philosophy of luxury living and convenience’.

Rudely interrupting such Buddhist nirvana, Deguara’s home and offices were raided last September in connection with ongoing investigations into the corrupt Vitals deal. Rumour has it that Chris Cardona retains an interest in DF Advocates and Keith Schembri is known to have a close relationship with Deguara and his firm.

Talking of Cardona, Daphne Caruana Galizia astutely observed way back in 2015 that he:

… was the one who signed that contract with Hani Hasan Naji Al Salah on behalf of the government. And that means that Kevin Deguara is working for both parties and it doesn’t take much imagination to work out that Chris Cardona put him onto Hani Hasan Naji Al Salah so that they can carry on getting the whole thing neatly stitched up while Deguara creams off as much as he can in professional fees from the Jordanian.

Shortly after Man of the Year in Organised Crime and Corruption took the reins, the then head of the government’s Privatisation Unit resigned in protest when Cardona over-ruled the adjudication board on a tender process, ensuring it went to Deguara and Farrugia (another partner in DF Advocates). This tender was for the provision of legal services to Cardona himself, then economy minister, for support in the preparation of granting licenses for 2 casinos mired in controversy.

Insiders describe Kevin Deguara and his firm as the legal equivalent of Brian Tonna and Nexia BT, and his name comes up in one role or another in several controversial projects of the disgraced Joseph Muscat government.

Given the controversy that’s haunted the AUM from the start, you’d think they’d err on the side of caution when selecting a new President, especially given the position had been eerily vacant since November 2019 when Dr Lewis Walker resigned. The structural confusion caused is highlighted in the most recent External Quality Assurance Audit Report:

The institution used to have a President and now has a Chief Executive Officer; it is unclear to the panel how the institution defines the difference between the two and what determined this change. Some institutional documentation still makes reference to the President instead of the CEO. The panel is unsure if the CEO is replacing the role of the President or if a President is still to be recruited in the future.

Published on the MFHEA website in July 2021, the assessment was conducted between 15-20 October 2020 and the AUM failed to meet 8 of the 11 quality assurance standards. Despite this, the AUM was granted a one-year extension on its original 5-year license. This temporary license is up for renewal in September this year. What will happen to the Brave New SmartCity campus if the AUM fails to fulfil requirements yet again? Will SmartCity be returned to SmartPeople?

And what about all those debts the AUM has incurred? According to 2020 figures, Sadeen Education Investment Ltd had made total losses of €14.55 million in the space of 3 years, its total liabilities exceeding its total assets by €24,041,647. Will all these debts and losses vanish down the streamlined plughole of some ideal AI world?

No doubt all will be revealed when crypto-happy Schembri unfurls his finger-lickin’ figures. A toast to the House, my friends!

But there was no champagne opened, at least not publicly, when the AUM appointed a new president at the end of last year. Given the lack of a president was cited as an issue in the Audit Report, finally finding a face to fit the role should give cause for celebration. However, Dr Michel Najjar seemed to creep in by the back door. Unless you kept in regular contact with the AUM’s website, you’d barely know he was there and even then all you find is his name and position. There’s no link providing any information on this man. 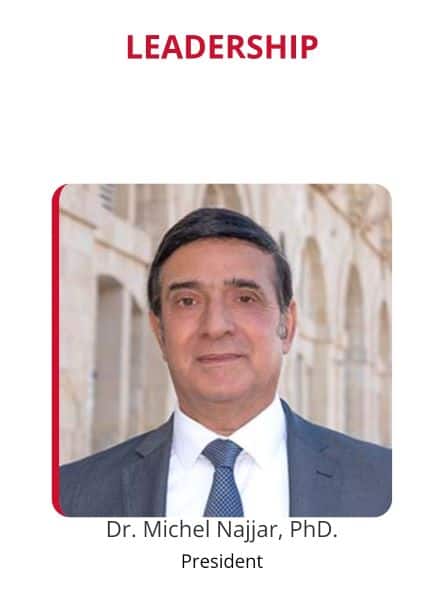 2 years ago, Najjar was the minister of public works in Lebanon. He held this position when, on August 4th 2020, a massive explosion went off in Beirut, one of the biggest non-nuclear explosions in world history. Over 200 people were killed, thousands were injured and large areas of the city – including residential apartments, schools, healthcare centres, infrastructure – were completely devastated. The estimated cost of the material damage is $3.8-4.6 billion while the environmental damage amounts to more than $100 million.

The day before the explosion, Najjar received a letter from the Supreme Defence Council alerting him to the large quantity of ammonium nitrate stored in the deadly warehouse. In response to a call from Najjar’s adviser, a technical team went to investigate the following day. It’s thought that maintenance work they then embarked on may have been a possible cause of the fire which led to the explosion.

Complications caused by Covid restrictions and the Eid holiday delayed the arrival of the warning letter by 10 days but the Lebanese authorities had been aware of the danger since 2014 when the General Security agency issued warnings via a letter to the prime minister, the president, and the ministers of interior and public works. Given this, current evidence suggests that multiple Lebanese authorities were criminally negligent in their lack of response and, further, that this led to a violation of the international human rights law stipulating the right to life.

Nevertheless, nearly 2 years on, nobody has been held accountable. The domestic investigation has been beset by problems, with accusations that the Lebanese government has tried to protect politicians and public officials from scrutiny. One judge was removed after he charged former ministers with criminal negligence and ongoing calls are being made by those seeking justice for international support via a fact-finding mission. Lawsuits are currently being mounted to prevent the government demolishing the remains of Beirut’s grain silos which, standing at the site of the decimated port, are viewed as symbolic of the tragedy. A lawyer representing the bereaved families asserts that the plan to remove the silos is an attempt by the government to ‘eliminate evidence of the crime.’

Najjar moved from a government accused of corruption and criminal ineptitude to the top position at the American University in Malta, a country likewise riddled in corruption. If a president tainted by ongoing allegations of criminality is part of Abela’s ‘new vision’ for the AUM then it seems to fit in with the same old ‘continuity’ mantra.

Given Najjar’s murky past and equally precarious present, one can only hope that the utopian dreams for the all-singing all-dancing AUM don’t simply go up in smoke. 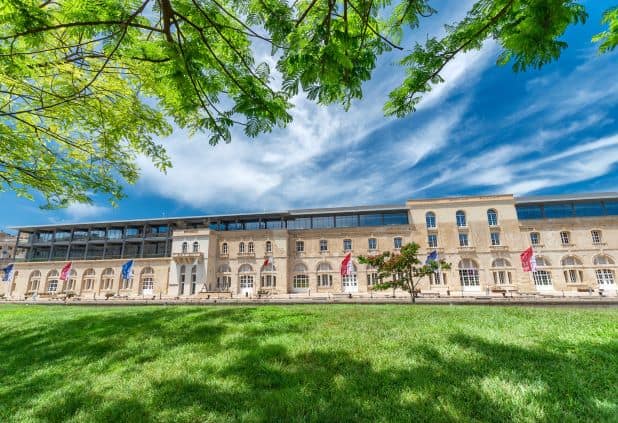