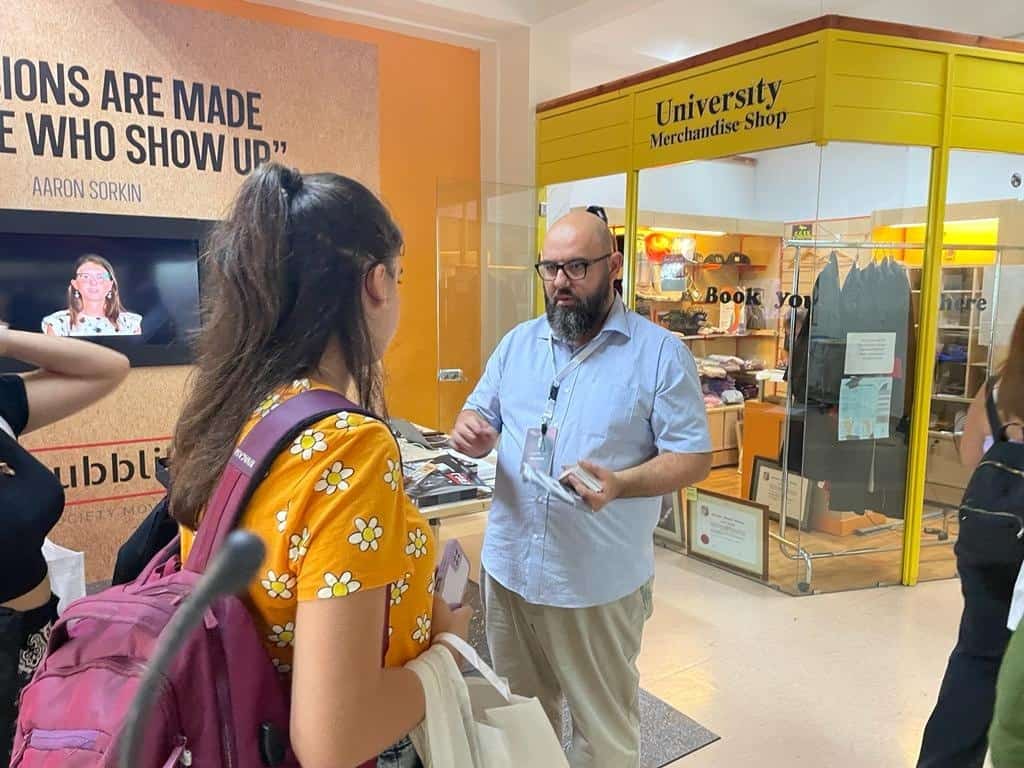 Together with colleagues from Repubblika I’m spending my days this week at the University campus. Our NGO has a stand at the grand festival which is Freshers’ Week where student societies work on attracting new members, students line up to get a permit for their car to enter the University grounds, potential employers give out freebies to get potential future employees to retain the memory of their brand when, in some future, distant in the new students’ eyes, around the corner for their potential employers, they’ll be thinking about job options.

In the midst of all this cacophony of messaging it is not exactly easy to speak to students about the rule of law, the killing of a journalist that happened when they were half way through secondary school, corruption in public contracts, and why they need to be interested in any of that. Most aren’t, especially on their first week at university.

I don’t want to give in to despair. It would be a mischaracterisation to suggest nobody’s interested. The organisers of Freshers’ Week, the officials and helpers of the KSU, the student union, are a bunch of committed, selfless, public-spirited, hard-working leaders that I am genuinely impressed by. And I can judge. I was a student leader before they were born and you won’t hear from me the old man’s nostalgia that they don’t make student activism like they did in my time anymore. The guys today are ace.

That’s not to mention student leaders in smaller societies that I observed this week wearing recognisable uniforms head hunting for mentees, new students to buddy with and take under their wing.

Repubblika’s stand is inside Student House, so we’re far from the new so-called Campus Hub, the satellite quarter built outside the ring-road. It’s a cool, hip place that makes the good old quadrangle outside Student House look positively drab. The space made the news today for a very particular freebie handed out by one of the exhibitors. 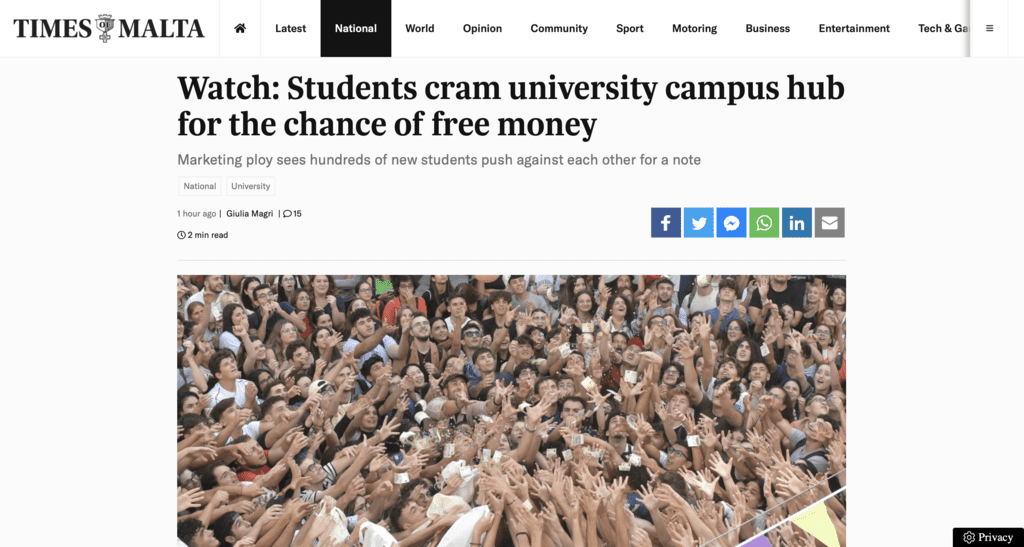 Freebies are, in and of themselves, unedifying. A stand encouraging people to consider a career in the public service is giving out free popcorn. A stand promoting careers in financial services gives out gifts for people who drop most balls in a fairground basket ring. A particularly popular stand offers people a free turn on an arcade style space invaders. It’s one way of hiring accountants I suppose.

You can call this harmless fun. One exhibitor today, at the Campus Hub, dropped 200 €5 notes from a height attracting an ocean of outstretched arms, upturned palms, grabbing at the air in the hope that one grasp includes a few fivers.

Perhaps this too is harmless fun, like the popcorn, or the basketballs, or the space invaders arcade game. For the promoters it’s a win because it’s the one gimmick that made it to the national media. For some students it’s an extra few euro which will probably go down in junk food.

Is it harmful? I don’t think so. Nor do I want to overstate the symbolic significance of university students dropping everything, including their notoriously painful self-consciousness, to reach out for flying money like the bachelorette who knocks her younger cousins to reach the bouquet at the end of the wedding. Not all students have money on their mind all the time. Not all of them are chasing the quick buck. Not all of them consider learning only as a way of making more money.

Some of them are even interested in democracy, the rule of law, and why the killing of a journalist they remember their parents speaking about is a bad thing.

But the incident with the flying money was still a bit rubbish really.

Previous:This aged like milk
Next:Don’t let these bastards have the last word