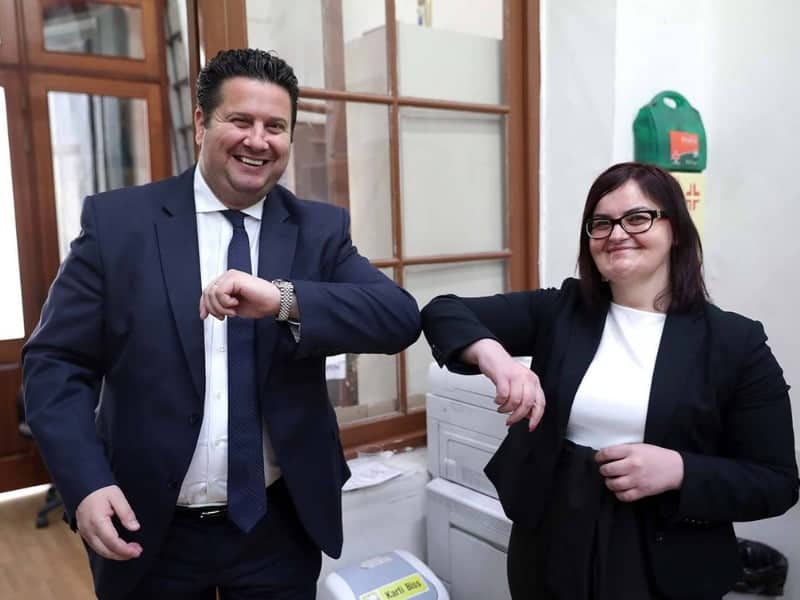 There was some anticipation for the court hearing today in the case brought by Repubblika challenging the attorney general for her decision not to prosecute Ali Sadr Hashemi Nejad and other crooks at Pilatus Bank.

There were many reasons for the anticipation. The procedure is unprecedented because it is the result of very recent changes to the law. The attorney general came up with all sorts of excuses not to testify which demonstrated her reluctance and suggested she had something to hide. The judge overruled her repeated requests to be excused. Lawyers for the one individual, a middle manager at Pilatus Bank, who alone was accused of serious crimes at Pilatus Bank had very good reasons to be interested in this as well.

And members of the public understood why Repubblika was doing this: that it is intolerable that what happened at Pilatus Bank remains buried likely because it is convenient for Joseph Muscat and his band.

The proceedings are going on as I write this. I am out of the courtroom having left it in a decision I needed to take when choosing between my role as an official of Repubblika (and therefore a party to this case) and my role as a journalist, sharing, as candidly and as widely as I possibly can, information that is in the public interest and that I am aware of.

I was forced to make that choice when Judge Christian Falzon Scerri decided to temporarily uphold a request made by the state advocate that the evidence Victoria Buttigieg gives is heard behind closed doors.

Lawyers for Victoria Buttigieg put forward several rejigged versions of arguments that have already been dismissed by the court in previous decisions. The one that appeared to convince the judge to act cautiously was the claim by the state advocate that Malta – the country – is obliged by treaty to respect the confidentiality of international proceedings started in an international arbitration tribunal against Malta – the country – by Ali Sadr Hashemi Nejad.

This was enough for the judge who was unwilling to risk causing the Maltese state to act in contempt of an international tribunal. He ordered the public out of the courtroom while the attorney general testified, saying he would review the decision at the next sitting on the basis of any evidence the state advocate would manage to produce by then that secrecy was indeed an obligation on the state.

I left the room with the rest of the press and the public to make sure my commentary here is not coloured by the content of the testimony given by Victoria Buttigieg given that in order to comply with the court’s order I would not be able to suggest what she actually said.

This commentary then is on her effort, successful for the time being, from preventing meaningful public scrutiny of her actions when it is being suggested by a civil society organisation that she has failed in her duty.

The excuses she gave are just that: excuses meant to prevent the public from knowing if she’s doing her job and if not, why not.

The notion of conducting in secret a procedure meant to give citizens the right to force a prosecutorial decision to judicial review is, frankly, non-sensical. The precise purpose of the procedure is to mitigate the risks of secrecy at every stage of the process. This right to judicial review has been granted with the explicit intention of compensating for the fact that prosecutorial secrecy has been abused over the past several years in order to guarantee impunity to criminals.

Judge Christian Falzon Scerri has reserved judgement on whether these proceedings should be opened up to the public. His final determination will wait for any evidence the state advocate can provide of Malta’s international obligations. If he is not satisfied any such obligations exist he may yet decide to open the lid on this.

But let us even consider, for the sake of argument, the possibility that indeed such an obligation exists. I think it is worth examining what it means. Put in simple terms this treaty gives investors who consider they have been treated unfairly by the government of a country that is not their own but in which they have invested their money, the opportunity to seek redress in an arbitration tribunal.

Put that way, it sounds like it makes sense. Consider for example how this principle might have been applied when, for example, Dom Mintoff’s government wrote laws to rob the Blue Sisters of their hospital. I am simplifying here, not least because the Blue Sisters were not themselves investors as such. But the simile helps illustrate the need to give investors the confidence that future governments of countries they invest in might not unlawfully or abusively take their investment away from them.

Now to our case. Ali Sadr Hashemi Nejad lost his Pilatus Bank in Malta because it was found to have been a laundromat for tyrants. This wasn’t the abusive behaviour of a government, as he claims, but the lawful consequence of his illegal activities. I don’t resent Ali Sadr Hashemi Nejad’s right to make his argument in front of an arbitration tribunal if he so desires.

But that can’t be at the cost of freezing the normal conduct of criminal proceedings that are part of the sovereign functioning of our state. Imagine I get a license and open a bank in Spain, by way of example. Imagine the bank is closed down because it is found that I used it to channel funds to fund terrorists. Imagine I go to this international tribunal, as Ali Sadr has done, to complain that the Spanish government has taken my bank away from me. Should I seriously expect Spain not to prosecute me for funding terrorism in its own courts while an international tribunal weighs the cost to me of losing my bank?

If the state does manage to prove in front of the court hearing Repubblika’s case against the attorney general what it seems to be implying: that it is obliged to wait for an international investment tribunal before the laws regulating crimes committed in our country are prosecuted in front of and decided by our courts, we have a serious problem because it would mean we have renounced the very sovereignty of our country and abdicated our responsibility to act on crimes committed within our territory in favour of an overseas arbitration tribunal you have never heard of in secret and which has no accountability to our constitutional and democratic framework whatsoever.

What’s more, if what they say is true, Malta would have effectively entered into an international obligation that exempts millionaire cross-border criminals (like Ali Sadr Hashemi Nejad) from the laws that would apply to our home-grown criminals whatever financial and legal resources might be.

Of course, it is reasonable to suppose that Malta has not in fact entered into anything like these obligations for the simple reason that Malta is not the only signatory of this treaty and nobody would agree to this madness.

What we have here, in my opinion at least, which cannot claim to be competent and would never suggest that it is humble, is a case of the Maltese state using an international treaty to act against the national interest and to serve instead the interest of Ali Sadr Hashemi Nejad and those whom Ali Sadr Hashemi Nejad might decide to implicate if he is too terribly inconvenienced by the actions of the Maltese state.

The fight goes on, though, I regret to say, this front, for now at least, will need to be fought behind closed doors. Behind closed doors is where crooks, criminals, and people with a lot to hide prefer to be. Our job is to burst open those doors. We’ll do that just as soon as we can.