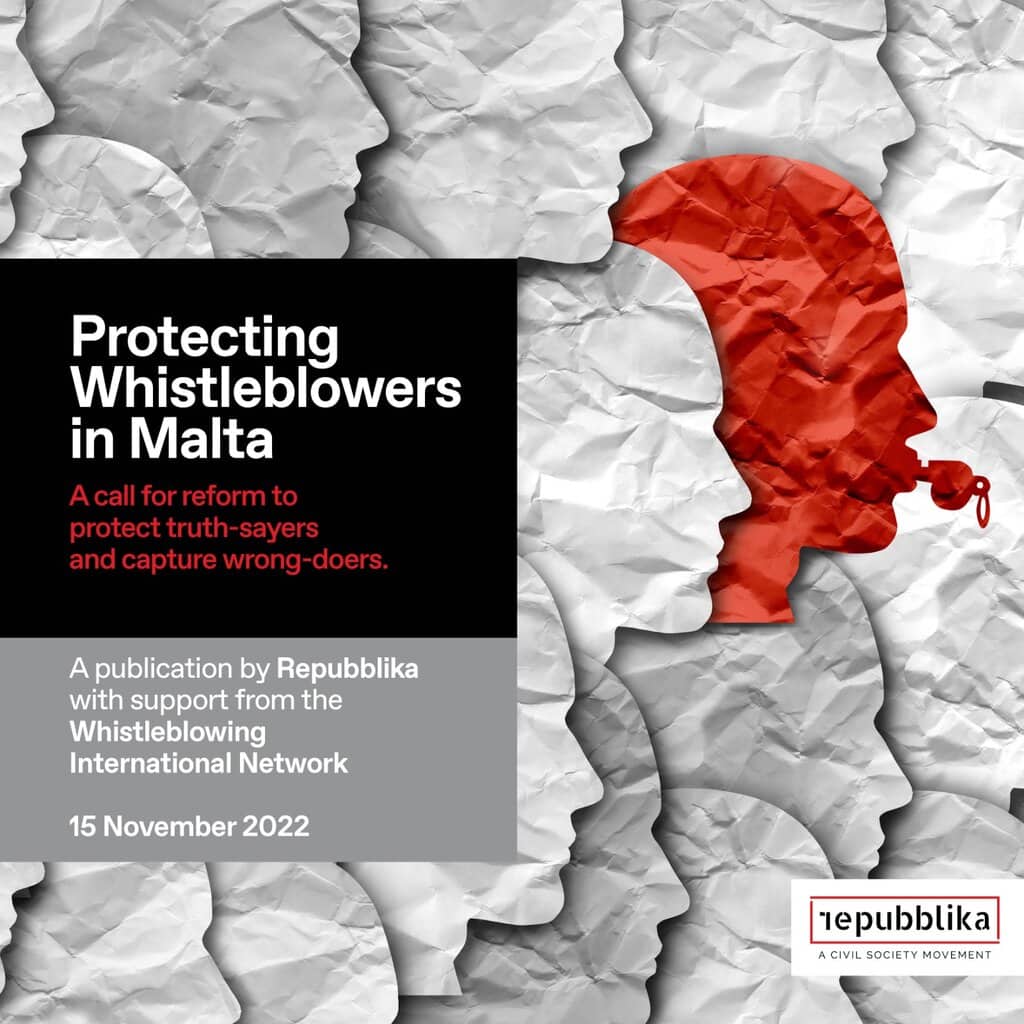 Repubblika yesterday published a policy paper (download it here: Protecting Whistleblowers in Malta) in a series we’ve been running discussing specific aspects of the country’s system and how they could be improved. This time we focused on having a law that properly protects whistle-blowers and encourages citizens who become aware of wrongdoing, typically at work, to speak up.

We first get interested in this subject because whistle-blower protection is an important tool to fight corruption. Someone at Nexia BT or at Electrogas could have spoken up sooner preventing the far worse consequences that followed the cover up of the crimes those organisations oversaw, including the consequence of having the journalist that exposed them killed. They might have spoken up if they expected to be protected from retaliation, job loss, and law suits.

It’s impossible to know what corruption in public procurement and in the allocation of public land we miss and never hear of but we can fairly assume that wherever there’s opportunity there’s someone trying to get away with it. Having allies on the inside, whistle-blowers from within, could save us a lot of money and help us catch criminals.

But it’s not just about corruption. A whistle-blower could help us ensure food safety, say, or expose illegal environmental damage like unlawful dumping of materials at sea. You need a whistle-blower law so that an engineer, a clerk, a middle manager in an organisation or business that is cheating its customers or the community one way or another overcome the fear of the consequences of speaking up.

Malta is supposed to have had a whistle-blower protection law since 2013 when the new Labour government came in and promised a new era of meritocracy and correct behaviour. As Robert Aquilina says in the video of the press conference launching our paper shown below the new whistle-blower law was being adopted even as Pilatus Bank was being licensed and Keith Schembri and Konrad Mizzi were lining their nests in Panama.

It should be no surprise then that since we’ve had it, before and after the law was amended to comply with a recent EU Directive last year, not a single whistle-blower used the law for protection as they exposed wrongdoing in their organisations. The law, instead, was used just once, by the government itself in a failed attempt at persecuting an opposition political figure, Giovanna Debono.

We did have whistle-blowers though. The experiences of Maria Efimova and Jonathan Ferris were a warning to anyone who might consider speaking up of just what sort of horrors they would have to face should they go through with following the call of their conscience.

Repubblika was helped in its analysis by the Whistleblowing International Network who put us in touch with Tom Devine who runs the Government Accountability Project in Washington DC. It’s hard to think of a more qualified expert on the subject. His analysis of Malta’s whistleblowing law could be a general assessment of the so-called ‘reforms’ introduced here over the last 10 years. The law looks good, but built within it are mortal traps designed to slap the whistle-blower and punish them severely should the government feel at any time that it is more convenient not to protect the whistle-blower rather than to do so.

The warning to potential whistle-blowers is stark. Don’t even think of using this law to protect you. It won’t. Potential witnesses are not waiting for us to tell them this. If they’ve spoken to a lawyer they will have told them that this whistle-blower protection law would be a farce if it weren’t a death trap. In any case most potential witnesses won’t get that far. They are frozen by the chilling effect of the other witnesses this country has horribly persecuted over the last years.

Still we chose to be constructive. We have published a competent analysis drawn up by international experts who have participated in the drafting of model whistle-blower protection laws throughout the world. And once again, as we have done several times over the last 3 years, we have again asked the authorities to open their doors to consultation, to let us argue as convincingly as we possibly can how to make changes.

If this country is serious about fighting corruption this is one tool it can’t afford to leave on the shelve to rust and gather dust. It’s a big if.