Her father a judge, her mother a parliamentarian: and yet no sense of public spirit whatsoever

Here’s Alexandra Mizzi who runs her mother’s toy shops while Marlene Mizzi is a Member of the European Parliament. You would think that being the proud daughter of public servants she would see the point of the public spirit of a few hundred people who participate in the democratic process by protesting their views.

Immanuel Mifsud speaking at today’s event was so right to remind the audience of an important Marie Louise Coleiro Preca speech some years ago exhorting civil society to rise from its slumber and lend its critical voice to a sleepy republic.

But Alexandra Mizzi has a business to run and on Sunday afternoon she doesn’t want a peaceful demonstration to distract anyone from the mindless buying of merchandise. We must have our priorities straight. Why think of justice, democracy, freedom of speech and rule of law when you can be buying toys? 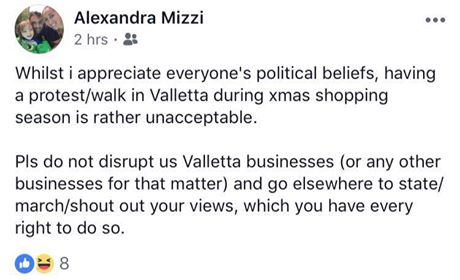 It is “unacceptable” to have a “protest/walk in Valletta during xmas (sic!) shopping” Alexandra Mizzi says. Go exercise your right where there is no one to listen or to be distracted from buying things by expressing thoughts.

Ms Mizzi, Valletta belongs to us too. The streets of our capital is where our democracy functions. And if you cannot lend any of your trading hours, even on a few hours of a Sunday afternoon, to the proper functioning of democracy you are asking us to stop being citizens and become zombified consumers of your merchandise.

Too many of us are already that way.

Antonio di Pietro told us today he saw all this in Italy when he started investigating corruption. Civil society backed him. It started with a few lonely voices that most people thought odd, inconvenient, even traitorous. But times change “and 4 became 40. And 40 became 400. And a small rivulet became an ocean”.

Alexandra Mizzi, we were in Valletta for 2 hours this afternoon. Next time we come — and there will be a next time — close your shop for two hours and lead your staff and your customers to join us in the streets.

Join us to ask for honest politics, for justice and for a citizenry endowed with rights and without fear. Join us to ensure that those who would inform you and those who would protect you are not blown up in their cars.

Follow the sense of public spirit of your mother and your father and give something back to this society that you take so much from. Give up 2 hours of your business.

Your children, if and when they inherit a free and open society served by honest public servants, will thank you for it. 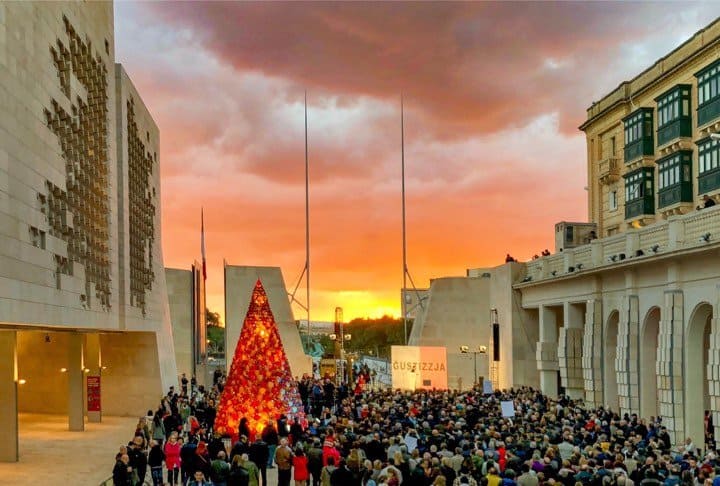 The photo with this piece is by Daniel Cilia.

Previous:8 month old FIAU report calls for criminal action against Konrad Mizzi
Next:Chris Cardona lied about withdrawing the garnishee orders against Daphne after she was killed