Martin Scicluna’s piece in The Times today is perfectly in character. As a health warning let me prepare you with this quote: “The principal reason for the PN’s debacle must be laid at her (Daphne Caruana Galizia’s) door and a party leadership that was committed to dancing to her tune.” Truly a man who has learnt nothing and forgotten everything. Let me paraphrase Daphne when she wrote about Martin Scicluna. If I am still making a public nuisance of myself at 80, please take me out and have me shot before my children do. 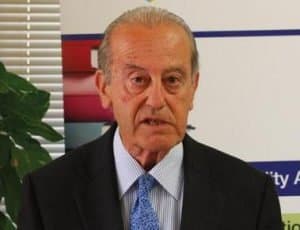 I was advised not to read Martin Scicluna’s column in the Times on a full stomach. Having just voided my bowels, I took the risk. I have just returned, figuratively speaking, from retching.

The fatuous faux ingenuousness, the craven spewing of apologetics for the regime and the blatant and revolting hypocrisy that deluged from the page have to be read to be believed.

This is a man who until recently had the audacity to say that he was the head of a think tank, God ‘elp us. He misses the point of the pro-Rule of Law movement that has risen so utterly that you have to wonder whether he even retains the faculties needed to be taken seriously.

Here’s one gem from this small, small man: “I suspect that many of those leading the cry for democracy and the rule of law, those disreputably declaring that they are ‘ashamed to be Maltese’ as though it were a badge of honour, and those demanding the Commissioner of Police and the Attorney General should resign, have only one objective: to force a new election.”

No-one – but no-one – has said that they are “ashamed to be Maltese” in the sense he spins it. And given the alternative, an election is hardly something to be desired, anyway.

What many, and I include myself in this, have said, is that the Government that Martin Scicluna clearly admires with a breathlessness matched only by a just post-pubescent teenager for an amalgam of Donny Osmond and David Cassidy (to use icons from his own ancient past) makes us ashamed to be Maltese.

This is because, read my lips Scicluna, being Maltese at the present means being associated with Joseph Muscat, Owen Bonnici, Kieth Schembri, Helena Dalli, Konrad Mizzi, Peter Grech, Lawrence Cutajar and the rest of the motley crew. The list is in no order of importance, they are all much of a muchness and they all, along with the rest of the bunch (Evarist Bartolo anyone?) are reasons why I am ashamed to share my citizenship with them.

Not to mention the anonymous shadows to whom they have conspired to sell our citizenship.

Here’s another gem, and I almost apologise on the small, small man’s behalf because it sounds so North Korean, the comments in [square brackets] are mine.

“Freedom of expression is alive and well”. [unless you’re anti-MLP, in which case you are insulted in the streets, sniped at, called all manner of names and worse]

He goes on: “There remains a lively independent press, as well as, sadly, party-controlled newspapers and television.” [the latter should go, here he has a point, but really, an independent press, you can’t say that when some outlets are so clearly agenda-driven while pretending to be independent]

And then these special gems flow from his nausea-inducing pen:

“Children go to schools in towns and villages, with shining faces and smart uniforms. Everywhere you will find the welcome and the helpfulness of people. The country is one of the most prosperous for hundreds of miles around” [all we need is for the kids to be given small MLP flags with Joseph Muscat’s smug face on them to wave while heading to school with shining faces and smart uniforms. Yes, we’re prosperous, but what a price we’re paying, even if Scicluna fails to grasp it]

There’s much more of course, not least of which is the disgusting way he insults Daphne Caruana Galizia’s memory while pretending not to speak ill of the dead. His whole column – at least in this he is consistent – is aimed at doing nothing less than speaking ill of Mrs Caruana Galizia, no matter what elegant language he camouflages it in, and I count myself lucky that I do not move in circles where I might come across this arrogant Lilliputian specimen.

Previous:Vive la femme de l’empereur!
Next:Michelle Muscat signed her own nomination for the volunteer of the year award