This morning’s post about Michelle Muscat being awarded the volunteer of the year award found people saying in their reactions that Michelle Muscat should have the good manners of expressing polite embarrassment at the award, decline it and suggest someone less well known but at least equally deserving is recognised for their work.

After all Michelle Muscat is well and truly recognised and recognisable without needing the reward.

But to say Michelle Muscat lacks the good manners of a little false modesty and bashfulness when faced by fawning adulation is to rate her too high.

To win the award of volunteer of the year you have to sign your own nomination. It’s in the rules. No nomination is accepted without the nominee’s signature. Since we can’t possibly think that anyone would break rules to give an award to Michelle Muscat, the only logical conclusion is Michelle Muscat is not only not surprised to get the gong. She actually pitched for it.

Was Michelle Muscat hoping she would be the runner up behind the anonymous people who run Inspire, the St John Rescue Corps and the Malta Red Cross? Of course not.

You see this is not a recognition of the organisations. Not exactly. I will not go into debates on whether the Marigold Foundation is more or less useful than the Red Cross or even than the Rabbit Club (whatever that’s for). But this award is a recognition of the individuals who work within NGOs, or lead them.

The whole point here is that anonymous volunteers are all recognised through the prize awarded to the least one among them. 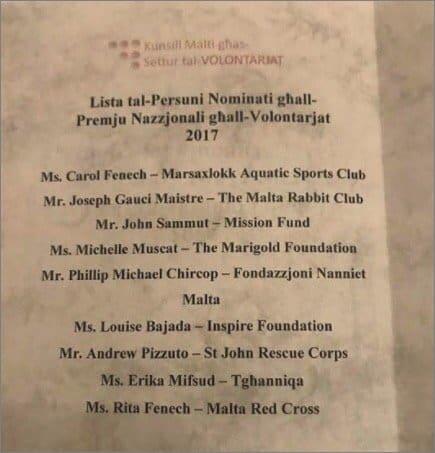 But there’s a bigger implication here. Michelle Muscat applies for this award to steal attention that other volunteers need much more than she does. In doing so she suffocates the opportunity of some other NGO or NGOs in getting some exposure and attracting funding and support from the community.

People flock to Michelle Muscat’s NGO in order to ingratiate themselves and seek favour with her and through her, her husband. You might think that is quite all right if she’s not pocketing the money and it’s going to a good cause. But it’s going to a cause of her choice. What basis is there for her cause to take precedence over others when all there is to give it more merit is her connection to the most powerful political leader in the land?

And in any case she’s not even a proper volunteer. If any of us got a car, chauffer and personal assistant from the office, we’d have to pay taxes on them as perks. The other volunteers she beat to today’s award have none of this.

This is not just about vanity and bogan ostentation. This is about corruption. And when corruption meets charity it is almost worse than any other form. Because it exploits the vulnerable and profits from them.

Corruption is not just about the handing over of brown envelopes or 6-figure transfers from Dubai bank accounts. It is also transacting in favour and ingratiation.

The politicisation of charity is an abhorrence in and of itself. If politicians are concerned about the vulnerable they have the means to legislate, tax wealth and redistribute it to ensure a balance in social well-being. Charity short-circuits that. When done by grass-roots volunteers or by members of civil society like churches and schools, charity is an act of protest. It is an act of raising funds and effort on a voluntary basis to make up for the failures of the state.

But when politicians lead charity they are papering over their own failure to ensure a just and inclusive society and, what’s worse, claim credit for it.

It was bad enough when we reduced the office of the President of Malta to a salvation army second hand good store. Continuing the patronising activities of colonial Mrs Governor who cut their boredom by organising Palace tea parties for military wives to raise crumbs for the natives was relatively harmless. But for the last few years the President has been stripped of the dignity and gravitas that office requires and transformed into the last thing the President of a country should be: a beggar and a bully.

The beggar bit is obvious. Bully, because the pressure to break records when raising funds is applied on businesses and NGOs that are forced to direct their charity budgets to the President’s cause rather than any other.

Now prime ministers have stepped in, or at least this one did with a wife who is more enthusiastic than most for the opportunity to grin inanely at the camera. Appeasing a demanding fund-raising President is harmless. Funding a demanding prime minister’s wife is nothing short of corrupt.