As Joseph Muscat said: Dom Mintoff’s memorial is a monument to the present. And the future. 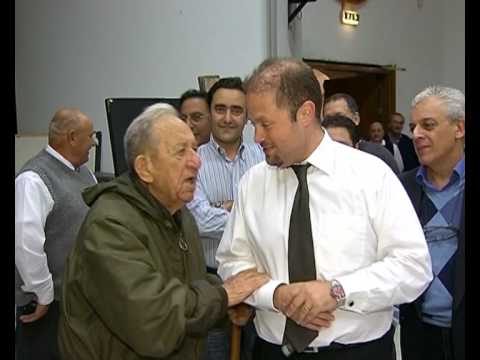 If journalism is my wife, history is my mistress. And I don’t publicly indulge in my thing on the side. I won’t here make an appraisal of Dom Mintoff and I can’t be arsed to dispute whether he’s deserving of a monument or not. It’s there. It’s not going to go away. And in 10 year’s time people are still going to know what it’s for as they wonder how a marble confection that looks like a Greek god had a shit there and the black staircase to suicide some metres in the background happened to fall about the place.

So I will instead assess Mintoff’s statue as a memorial to the present and the future under the party he founded.

The Mintoff memorial is erected to honour corruption in politics. Government ministers are personally involved in schemes to make money out of public policy and in one form or another they are made silent partners and revenue earners in the procurement they personally secure out of their office. They insist on appearing as negotiators and personally sign deals with outsiders in smoke filled rooms. Some ministers are more powerful than others. The honest politicians dare not stand up to the rotten and corrupt because they are protected by the boss.

The Mintoff memorial is erected to honour insane external relations. Friendships with dictators and kleptocrats are prioritised over sensible policies with natural allies and partners. Photo-opportunities with the most brutal regimes are relished and the embarrassment they create for governments forced to pretend to be our friends is a cause for sadistic pleasure. The reputation and access of the country is placed at the service of these regimes and their crimes are covered up by our friendship.

The Mintoff memorial is erected to honour short-term economic policy. With no diversification, no innovation, no investment in infrastructure, no efficiency gains in public services, no planning for sustainable social services, no improvement to health services, no reduction in public sector numbers, and no control on expenditure. And instead with corrupt public procurement, wasteful subsidisation, rampant clientelism in recruitment, political mass-engagements of untrained employees, management by persons of trust rather than persons of competence, massive political discrimination, and under-utilisation of resources perceived as disloyal.

The Mintoff memorial is erected in honour of politicised policing. Law enforcement is coloured by the political fealty of the person concerned. The crimes of ministers and the politically favoured are overlooked. Dissidents are harassed and intimidated. Tax enforcement, planning enforcement, licensing and permitting are tools to promote the loyal and hurt the objectors. Enforcement is discriminatory and uniformed prejudice is tribal. Crime and policing form alliances of convenience against the common enemy: the honest and true.

The Mintoff memorial is erected in honour of indiscriminate development. Concrete is favoured over soil. Mediocrity over discernment. More is preferred over better. Historical sites are wantonly destroyed whilst memorials to a mythical socialist golden age are preserved for posterity. A tight alliance is formed with road builders, cement mixers, quarry masters and property realtors to make money today and leave tomorrow’s problems to others.

The Mintoff memorial is erected in honour of a proletarianisation of culture: the renewal of Ġensna and Warda Kanta in Valletta 2018. Jason Micallef embodies culture which is understood to mean imported circuses, fire eating and sword swallowing and the din of zealots and harlots. A culture where the protection of free speech is undesirable and compliance with the regime is compulsory.

The Mintoff memorial is erected in honour of political isolation from institutions that uphold democracy and freedom. The Council of Europe’s investigations are ignored. The European Parliament’s resolutions are give the cold shoulder. The country’s own version of rights and freedoms held as a higher standard than that of the rest of the world.

The Mintoff memorial is erected in honour of violence and intimidation of opposition. Journalists are harassed and intimidated, their relatives publicly humiliated and attacked, their safety ignored when not positively endangered, their sources blackmailed or imprisoned. The international press is shut out, their questions unanswered, their reporting mocked, their motivations ridiculed.

The Mintoff memorial is erected in honour of people killed in their line of duty as they are wiped off the path chosen by the government against any resistance.

Truly as Joseph Muscat said, the Dom Mintoff days are in the present. And, as he would have it, in our future.