Hurrah for the bleeding obvious 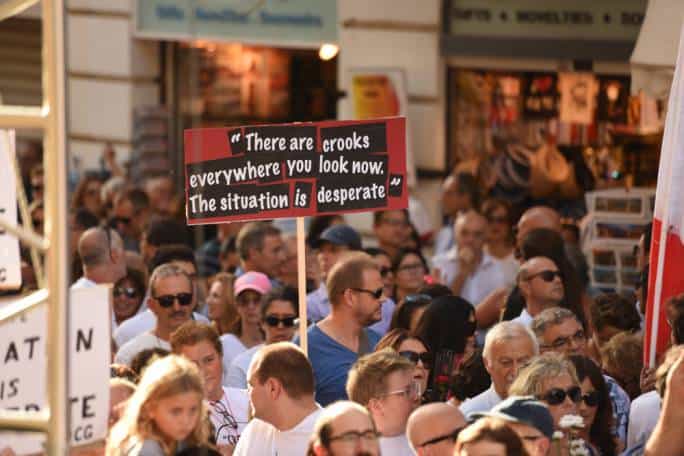 Eight months since their mother was killed, the court has told the grieving sons of Daphne Caruana Galizia the investigator into their mother’s murder is not a credible investigator because of the manifest conflict of his interests.

He goes to bed each night with a person whose very political existence depends on the favour of the persons who should be prime suspects in this case.

I say should be because they aren’t. Under Silvio Valletta’s politically motivated watchful eyes, the police have guardedly avoided even opening lines of inquiry into any politicians who should be investigated as persons of interest in the murder of their “harshest critic” as they called her if anything to rule them out and clear their names.

Activists who were invited to meet Keith Arnaud, the prosecuting officer in this case, told me that when asked Keith Arnaud has confirmed the police have not spoken to any politician that may have had a motivation to eliminate Daphne Caruana Galizia for revenge or to prevent her from continuing her work.

When Magistrate Anthony Vella last week asked for phone logs belonging to Joseph Muscat, Adrian Delia and Chris Cardona he was, as I see it, merely sending out the signal that in this case the police were not doing their job and he was having to do it for them.

Although he is well within his rights to ask for the call logs, Magistrate Vella will know that it is quite possible the logs no longer exist so many months after the fact. But if that’s the case, the negligence is not his. It is the police’s responsibility to investigate a crime and while the prime minister was busy pretending to turn stones, Silvio Valletta may very well have been ensuring justice is miscarried.

The court has today acknowledged it is at least reasonable to think this might have been the case.

When international journalism federations, observers, MEPs and members of other Parliaments, join the victim’s family in their doubt Malta is acting properly and seeking justice in this crime, this is what they refer to. It all started that 16th October when Consuelo Scerri Herrera showed up on the crime scene and then froze the forensic investigation while she slept over the decision whether to recuse herself from the case.

It continued as some officer on site took photos of Daphne Caruana Galizia’s body parts to parade them gleefully on Whatsapp.

It went on as the government sought to intimidate the family by rousing crowds against them as they sought to protect their rights being heirs to a woman whose very right to life was denied.

When you come — or don’t come — on the 16th of the month in front of the law courts to demand justice is made you do so because all this is going on and because you understand — or you don’t understand — that if justice is denied Daphne Caruana Galizia and her family, justice can be denied to you whenever you might need it.

A court today decided to acknowledge that unless Silvio Valletta is removed from the investigation and all his work reviewed again, doubts must persist that justice is being served. That decision will likely be appealed by a government keen on ensuring we never learn who ordered Daphne Caruana Galizia dead.

There’s so many reasons to keep up the protest.