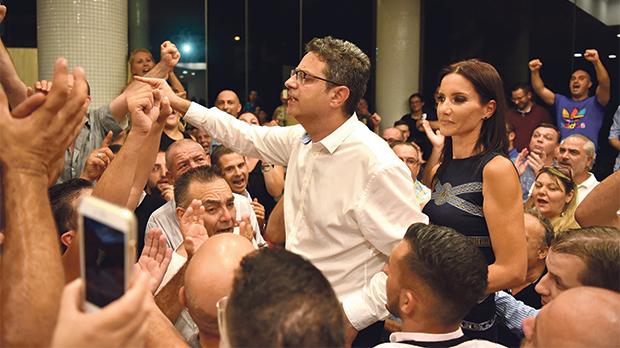 Since we are not to consider a woman as merely an extension of her husband, we are not to judge a man by the behaviour of his wife. If a man should not be able to control his wife he cannot be held responsible for her behaviour. A leader’s wife is not a child. She is her own woman and if we dislike what she says or what she does we have no right to extend that on her husband. If it reflects on him in our eyes it is because there’s a residue of the traditional assumption that a wife is an accessory to the package that a leader brings to the table. 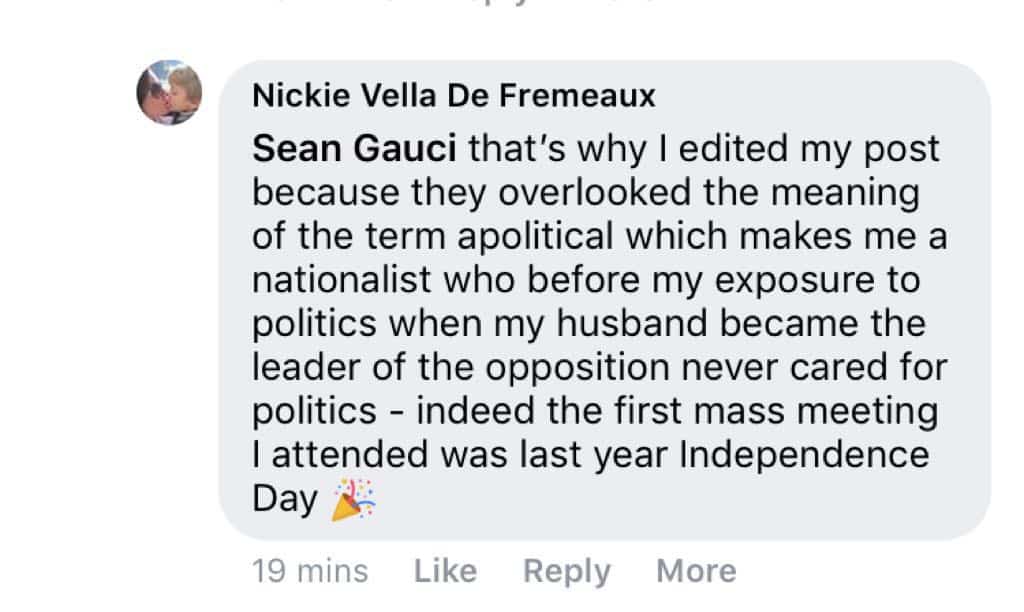 Nickie Vella de Fremaux, by her own account, was not interested in the question on whether Malta should join the EU, on whether Malta should choose between Lawrence Gonzi and Alfred Sant, on whether Joseph Muscat’s corruption and abuse of journalistic freedoms should stop, on whether Joseph Muscat should be confirmed as prime minister in 2017. Whenever the country was at a cross roads in her adult life she was “not interested” and she “feels amused” that we think she should have been.

What is really in question here is how to fit all that talk about being a smart professional with causes close to her heart with a person who professes recidivist indifference to the problems of her nation: that she is only now bothering to make a contribution to the community because her husband has become party leader and that implicitly she would have continued to be indifferent if he had not.

Note that I am underlining her ‘apolitical’ statements more than the grating declaration that “jien mhux Nazzjonalista”. I can imagine how that must feel to core PN supporters although many would not admit it.

When I write pieces like this, hurt PN supporters try to think of insults they expect might hurt me. Some say I write drivel. Some tell me to ‘get a life’ which does not mean what they think it means. Some tell me to ‘get a treadmill’ which is witty in a way. Many feel entitled to remind me I caused more harm to the PN with the 2010 bus reform than anyone could be doing now, which is an argument I refuse to dispute as I do not write to clear my name. Some say I envy the party leader – a line from Joseph Muscat’s handbook, that – forgetting apparently that there is hardly a less enviable position to be in today than Adrian Delia’s.

Some though throw the ultimate fireball in the arsenal of a party loyalist: ‘Manuel Delia mhux Nazzjonalist’.
Never mind for a minute whether that is factually correct or not, and even if it were if that should be a problem. Focus on the intent of the person writing the insult. For a hard core PN supporter who volunteers to troll critics of their party whether under instruction or on own initiative, not being Nazzjonalist is the ultimate depravity. In their mind there’s a soup made of foul and toxic ingredients: betrayal, sabotage, sedition, and the ultimate offense: an ambivalence to the tribe that is even worse than association with the enemy.

And then, as the PN was asking people to part with their money to prop their party they surely must know will at this rate struggle to win the Għasri election, never mind the national Parliamentary vote, Nickie Vella de Fremaux, deputy fund-raiser in chief, tells them she’s not Nazzjonalista.

As I argued here, this should, in principle, not reflect on Adrian Delia. Presumably he is interested in politics, is not apolitical and was therefore not indifferent to the pro anti EU campaign, or Alfred Sant’s wish to lead the country again, or Joseph Muscat’s corruption or his confirmation as prime minister in 2017.

Of course judging by his wife’s rules, the fact that he wasn’t at any of the political gatherings of all those campaigns means he was indeed apolitical. Let’s imagine he wasn’t.

One can’t expect him to cancel his wife’s Facebook subscription even though he may secretly wish it. Or to have microphones malfunction every time she hops towards one mindlessly oblivious of the fact that speaking her mind is really the problem here.

But there’s something more worrying: that these remarks by Nickie Vella de Fremaux may not be the outbursts of a woman unfamiliar with the invisible lines that run between cause and effect. That actually this is all scripted and intentional. And that the message is being delivered here is that politics is a nasty profession that went the way of the dodo and that what she and her husband are doing is not policy but position.

For that is what populism is: the absence of politics, replaced instead by pure personality. That faced again by the big questions like EU membership or fighting or condoning corruption, the PN will not lead but follow popular will under the guise of democracy and dolled up and glamourised to compensate for the absence of meaning with the spicing of charm.

In there then is the PN that stands full square behind Joseph Muscat letting children, pregnant women and desperate migrants burn in the sun and drown in the sea while we make jingoistic speeches. In there is the PN that accepts funding and hosts its parties in the properties of a tycoon, Silvio Debono, who among the most has benefited from this government’s corruption and expects to continue to do so should the PN be returned.

In there then is a PN that is no longer Nazzjonalist but a cultist movement focused on a person – or a couple – rather than what they stand for.

There’s another classic insult hurled by hurt PN fans at these sort of commentaries: “Ħadd mhu akbar mill-partit”. That phrase too does not mean what they think it means because clearly for the first time ever, some are.