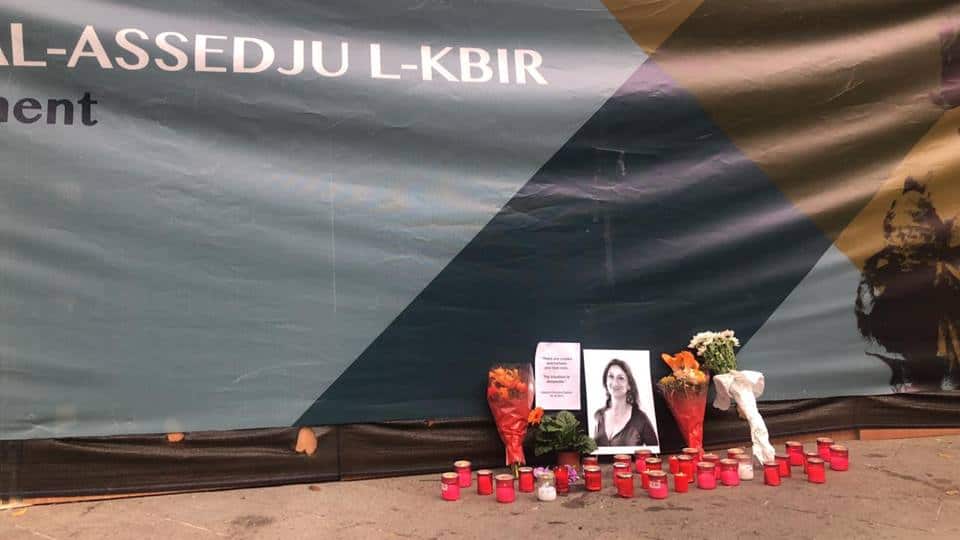 The oldest rhetorical secret weapon for those who run out of argument is trivialisation.

Troll central dispatched the usual suspects to react to the constitutional application I filed yesterday saying the removal of the protest in Great Siege Square by state agency is a breach of the freedom of speech.

The old canard that “a national monument belongs to everyone” and not just to the “Daphne worshippers” has run out of some steam. People cannot give you the “u ajma, why don’t you do it a bit to the side” any more. Not when the removals actually being contested because of direct admission of Owen Bonnici and his staff were from “a bit to the side”.

The Great Siege Memorial is after all boarded up because, it appears, the plinth needs half a day’s worth of scrubbing with store-bought acid and a month of quiet shade. The public cleaners are being sent to pick and bin the protest which is now outside the hoarding well clear of the boarded up memorial.

So instead the trolls now argue that if the courts find in favour of the argument that the constitution protects the right of protesters not to be silenced by government, they will then be able to start a protest over the fact their hamster died, or in memory of their great grandfather who drank himself to an early grave.

If you have the right, why don’t I?

Well yes, in principle, you have the right to be stupid. Because this sort of equivalency is nothing better than stupid. If you cannot tell the difference between a political protest and having a laugh, by all means indulge yourself. I am not stepping up to make the judgement call which is which.

A bit like a US judge famously said he could not define pornography but he’d know it when he sees it, I cannot define a political protest but I know it when I see it.

The trolls are right on one thing. The protest in Great Siege Square is not an extended funeral. Mourning is a private matter and at some point it changes into memory and going on with life. But a protest demanding justice only runs its course when justice is served. And if justice is not granted, it must be demanded.

Now if you want to demand justice for the short lifespan of your hamster or your great grandfather’s dodgy liver, good luck to you.

Trivialisation will not defeat the argument for freedom of speech when the speech is not trivial.

Even Saviour Balzan gets it. It’s hard to think of someone less vociferous about his dislike for Daphne Caruana Galizia and those he too must perceive, wrongfully but not unusually, as “Daphne worshippers”.

But he has the good sense to understand that the attempt by the state to silence the protest is a dangerous precedent that could be applied to a protest he may himself be inclined to march out for. If people he disagrees with can be crushed and brushed aside by the state, it could happen to people he agrees with.

Consider this article by Carmelo Mifsud Bonnici. The PN MP is a close confidante of Adrian Delia and the PN leadership that has been reluctant to take up what it too perceives to be the cause of “Daphne worshippers”. But this blog post of his makes the case very clearly. Democracy cannot be said to exist if the state uses its power to brush away protest.

The PN itself termed Owen Bonnici’s public statements as a breach of fundamental rights in the most explicit terms possible. It may not be its own rights that it is seeking to protect, but it has shown manifest concern for the rights of protesters.

Although he makes no mention of the protest in Great Siege Square, Labour councillor Desmond Zammit Marmara is clearly concerned with the disdain the government has for civil society. He expresses outright disgust at how the government rode roughshod over public outrage at the ITS project by dB. He calls it “perverted democracy”. He could not have been more explicit.

The argument is quite simple. This supreme self-confidence of the government in its own authority is dangerous and quite apart of what you think about the specific issues, people who truly cherish our democracy above their support for their party are seeing what is happening to Malta’s polity and feel they must act.

Desmond Zammit Marmara’s public criticism of his party in government is an act of courage and consistency. As is the PN’s decision to publicly argue against suppression of freedom of speech. As is Saviour Balzan’s commentary that the government’s actions are not merely tactically stupid — which is as far as Mark Camilleri would go — but reprehensible on principle.

My decision to take the government to court over this is consistent with this consensus I share with people I disagree with about almost everything else: that there are fundamental lines in the sand no government should cross and that if a government cannot restrain itself to stay behind the limits of the constitution, then everyone must speak up and push it back to where it belongs.

Silence leaves the space for triviality and ridicule. And that is not meant for a laugh. It is meant to enable the continued onslaught by a government intent on the perpetuity of its own power.