This is my article in this month’s Money Magazine. 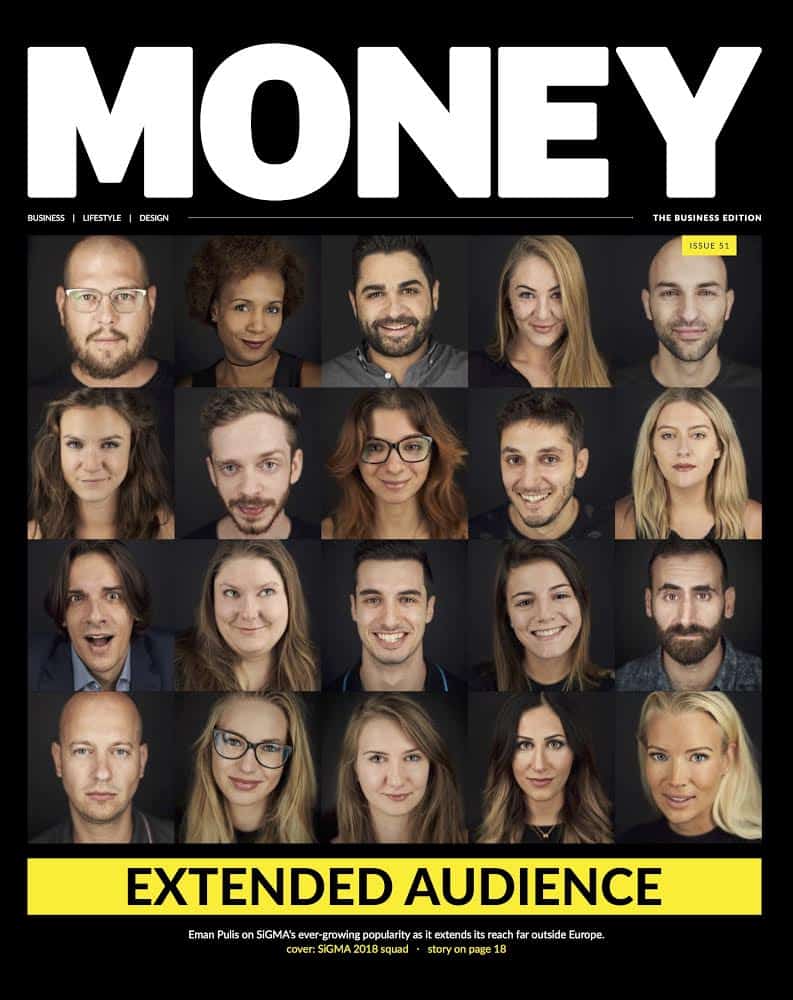 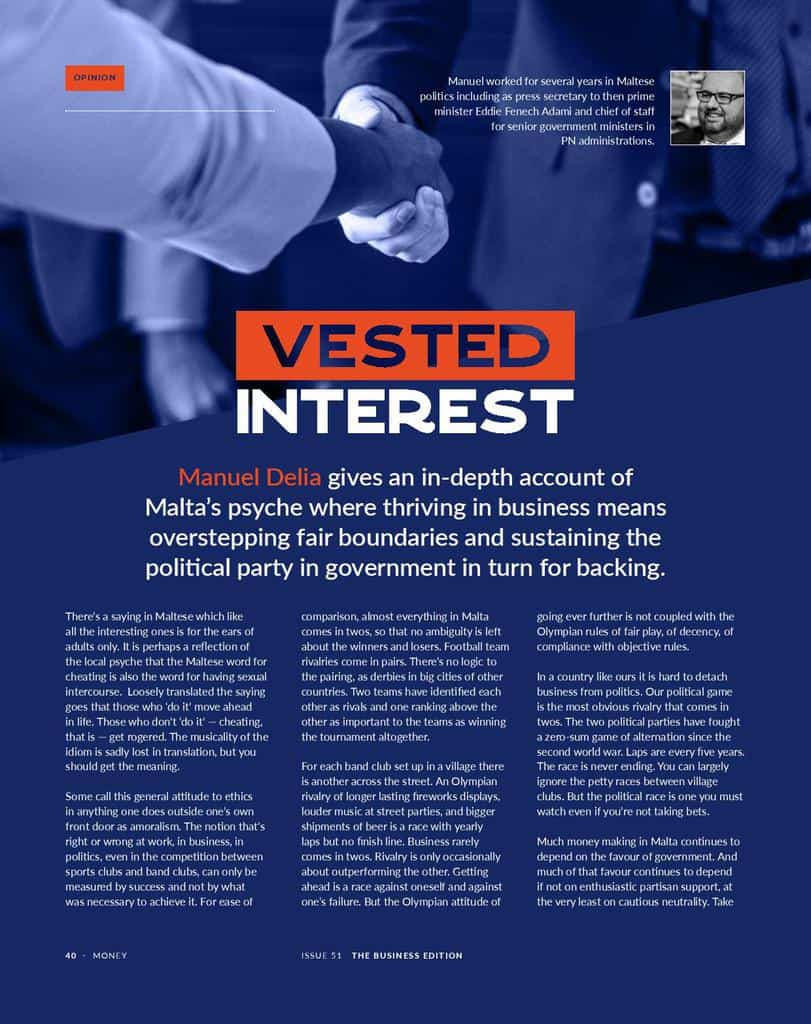 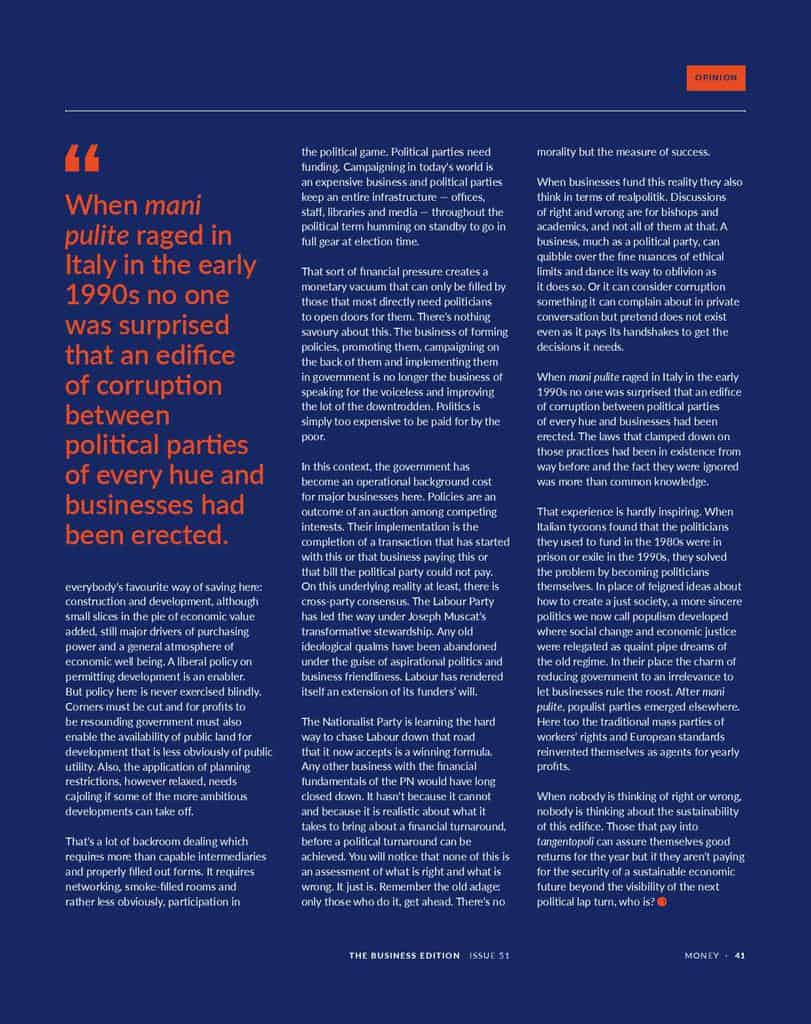 There’s a saying in Maltese which like all the interesting ones is for the ears of adults only. It is perhaps a reflection of the local psyche that the Maltese word for cheating is also the word for having sexual intercourse.  Loosely translated the saying goes that those who ‘do it’ move ahead in life. Those who don’t ‘do it’ — cheating, that is — get rogered. The musicality of the idiom is sadly lost in translation, but you should get the meaning.

Some call this general attitude to ethics in anything one does outside one’s own front door as amoralism. The notion that right or wrong at work, in business, in politics, even in the competition between sports clubs and band clubs, can only be measured by success and not by what was necessary to achieve it.

For ease of comparison, almost everything in Malta comes in twos, so that no ambiguity is left about the winners and losers. Football team rivalries come in pairs. There’s no logic to the pairing, as derbies in big cities of other countries. Two teams have identified each other as rivals and one ranking above the other as important to the teams as winning the tournament altogether.

For each band club set up in a village there is another across the street. An Olympian rivalry of longer lasting fireworks displays, louder music at street parties, and bigger shipments of beer is a race with yearly laps but no finish line.

Business rarely comes in twos. Rivalry is only occasionally about outperforming the other. Getting ahead is a race against oneself and against one’s failure. But the Olympian attitude of going ever further is not coupled with the Olympian rules of fair play, of decency, of compliance with objective rules.

In a country like ours it is hard to detach business from politics. Our political game is the most obvious rivalry that comes in twos. The two political parties have fought a zero sum game of alternation since the second world war. Laps are every five years. The race is never ending.

You can largely ignore the petty races between village clubs. But the political race is one you have to watch even if you’re not taking bets.

Take everybody’s favourite way of saving here: construction and development, although small slices in the pie of economic value added, still major drivers of purchasing power and a general atmosphere of economic well being. A liberal policy on permitting development is an enabler. But policy here is never exercised blindly.

Corners have to be cut and for profits to be resounding government must also enable the availability of public land for development that is less obviously of public utility. Also the application of planning restrictions, however relaxed, needs cajoling if some of the more ambitious developments are allowed to take off.

That’s a lot of backroom dealing which requires more than capable intermediaries and properly filled out forms. It requires networking, smoke filled rooms and rather less obviously participation in the political game.

Political parties need funding. Campaigning in today’s world is an expensive business and political parties keep an entire infrastructure — offices, staff, libraries and media — throughout the political term humming on stand by to go in full gear at election time.

That sort of financial pressure creates a monetary vacuum that can only be filled by those that most directly need politicians to open doors for them.

There’s nothing savoury about this. The business of forming policies, promoting them, campaigning on the back of them and implementing them in government is no longer the business of speaking for the voiceless and improving the lot of the downtrodden. Politics is simply too expensive to be paid for by the poor.

In this context government has become an operational background cost for major businesses here. Policies are an outcome of an auction among competing interests. Their implementation is the completion of a transaction that has started with this or that business paying this or that bill the political party could not pay.

On this underlying reality at least, there is cross party consensus. The Labour Party has led the way under Joseph Muscat’s transformative stewardship. Any old ideological qualms have been abandoned under the guise of aspirational politics and business friendliness. Labour has rendered itself an extension of its funders’ will.

The Nationalist Party is learning the hard way to chase Labour down that road that it now accepts is a winning formula. Any other business with the financial fundamentals of the PN would have long closed down. It hasn’t because it cannot and because it is realistic about what it takes to bring about a financial turnaround, before a political turnaround can be achieved.

You will notice that none of this is an assessment of what is right and what is wrong. It just is. Remember the old adage: only those who do it, get ahead. There’s no morality but the measure of success.

When businesses fund this reality they also think in terms of realpolitik. Discussions of right and wrong are for bishops and academics, and not all of them at that. A business, much as a political party, can quibble on the fine nuances of ethical limits and dance its way to oblivion as it does so.

Or it can consider corruption something it can complain about in private conversation but pretend does not exist even as it pays its handshakes to get the decisions it needs.

When mani pulite raged in Italy in the early 1990s no one was surprised that an edifice of corruption between political parties of every hue and businesses had been erected. The laws that clamped down on those practices had been in existence from way before and the fact they were ignored was more than common knowledge.

That experience is hardly inspiring. When Italian tycoons found that the politicians they used to fund in the 1980s were in prison or exile in the 1990s, they solved the problem by becoming politicians themselves. In place of feigned ideas about how to create a just society, a more sincere politics, we now call populism, developed where social change and economic justice were relegated as quaint pipe dreams of the old regime. In their place the charm of reducing government to an irrelevance to let businesses rule the roost.

After mani pulite, populist parties emerged elsewhere. Here too the traditional mass parties of workers’ rights and European standards reinvented themselves as agents for yearly profits.

When nobody is thinking of right or wrong, nobody is thinking about the sustainability of this edifice. Those that pay into tangentopoli can assure themselves good returns for the year but if they aren’t paying for the security of a sustainable economic future beyond the visibility of the next political lap turn, who is?

Previous:How much for a Dali? A Patrick Dali.
Next:Everything happens for a reason