Times of Malta filed it under their “Odd News” section. But is it really that odd?

Maria Efimova tweeted a short clip of herself and two other women dancing and challenging Joseph Muscat to a dance-off. “I challenge you to a dance battle,” she said. “Whoever loses, owns Egrant.”

@JosephMuscat_JM, I challenge you to a dance battle. Whoever loses, owns Egrant pic.twitter.com/vlSruODiFa

That’s not as flippant as it sounds.

Of course the context is Joseph Muscat’s own dance to the megalomaniac tune “Ma tagħmlu xejn ma’ Joseph tagħna,” which translates, when switched to the first person since he’s not speaking about the deltoids of Joseph of Arimathea, as “you can’t touch me”.

That irrational line of defence — I’m too powerful for justice to reach me — has been his case against the accusation of bribery and corruption which Maria Efimova testified to.

Joseph Muscat recently asked rhetorically how one can defend themselves from a lie. He answered his own question by dancing.

A dance off is no way of establishing the truth about anything, not even establishing with any measure of certainty who the better dancer is. But the Prime Minister of your country has been doing no better in dealing with the indictment that he and many of his colleagues are corrupt.

A dance off is a race for the louder applause to determine which performer pleases the crowd more. And that’s really all Joseph Muscat is interested in. He dances to convince his crowd he’s the best thing since the first coming of the Messiah.

Maria Efimova, exiled, a veteran of time in jail waiting for Joseph Muscat’s request for her forced extradition to be denied, twice, by Greek courts, looking to rebuild her life after the slander thrown at her, has the strength to mock Joseph Muscat who dances and laughs because “no one can touch me”.

She mocks his strutting with the press parrying questions with tu quoque backflips and non sequiturs.

She mocks the irrational line of defence that any accusations about his behaviour must be borne of envy for his greatness and the performance of the economy which he runs … to the ground.

On 1st May last year Joseph Muscat danced in front of a huge crowd in Valletta, proving in his mind to the world he was innocent because so many people applauded his strutting on stage. 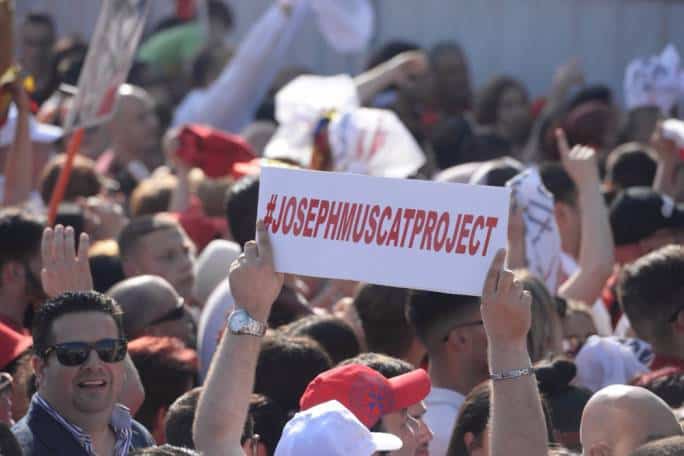 That was how he marked six months from the killing of Daphne Caruana Galizia and how he responded to the mounting evidence published by the Daphne Project.

Today, 500 days since the day Daphne was killed, I’m reminded of a solitary dance in response to Joseph’s prancing and strutting on that May Day stage sent to him by a woman who had no crowd to applaud her in Bidnija.