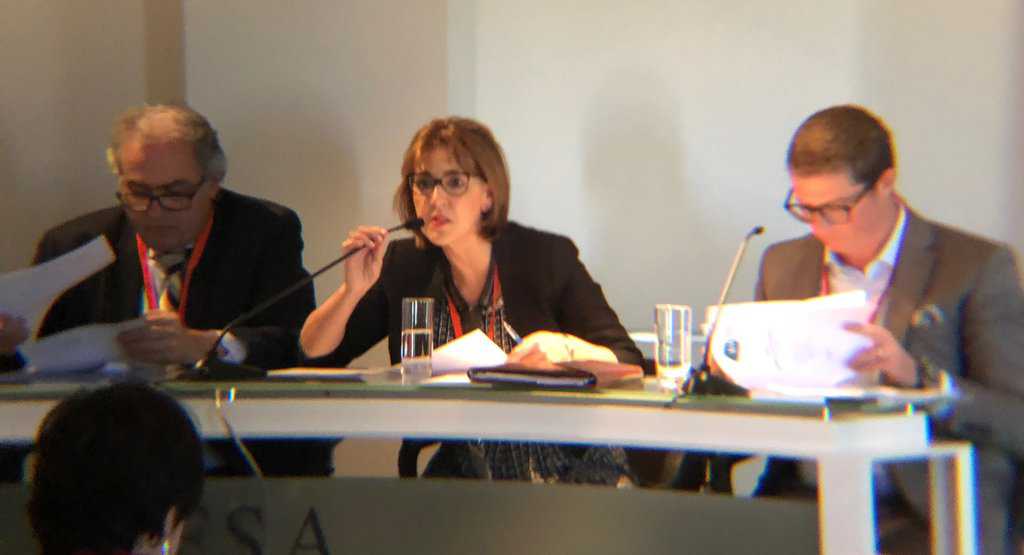 Reading the Times of Malta coverage (see below) of the conference organised by bankers and finserv intermediaries yesterday really made my blood boil. It’s perhaps why I can never work the beat and cover these events sitting quietly in the back taking notes.

There’s the classic line of Edward Scicluna who may know a thing or two about economic theory but must have missed the ‘introduction to history’ class when puberty hit him.

What really struck me was the roll call of practitioners who, at least judging by the Times’ summary, stood up, in turn, to explain to each other why Malta’s financial services sector is facing reputational damage.

It sounds like a meeting of Alcoholics Anonymous where people start their bit by saying ‘My name is Juanita Bencini. And other people are harming my industry’.

Consider how Joe Zammit Tabona and Andrew Manduca complained their life will be hard as long as the ‘mastermind’ (why one?) behind the assassination of Daphne Caruana Galizia is not brought to justice.

Now there’s a callous, egocentric, superficial reason to find out who killed her, isn’t there? As if that’s what we needed.

Of course, this relies on one mystifying assumption. That the ‘mastermind’ turns out to be completely unmotivated by the filth that their industry funnels. How can they be so sure that the discovery of the truth would not harm the reputation of the country more than the current limbo if we are going to use the same utilitarian reasoning to choose whether to even want to know who killed Daphne?

What these clowns are saying here is that if Daphne didn’t go and get herself blown up in a car, the world would have continued to ignore what she was revealing and they could continue happily covering it up.

Consider again how Andrew Manduca lies the blame for reputational damage at the feet of “quibbling politicians, journalists and” — with what he passes for objective decency — “financial practitioners”.

Hopelessly vague but you’re touching on something, Sir.

I mentioned Juanita Bencini because she intervened in the discussion and recommended improvements to legal lacunae. Since she was in the room one would expect that while they’re blaming ‘journalists’ for Malta’s reputational damage no one was going to discuss KPMG’s clients when Juanita Bencini was there.

Care to think of a few? Ali Sadr Hasheminejad perhaps who set up a bank in spite of being a veteran of bank fraud, international sanction busting, multiple passports, multiple dates of births, and a hidden Iranian nationality with connections to Iranian State security? He whose bank in Malta operated in rampant breach of anti-money laundering laws and who handled clients who would throw a population in prison before explaining where they swindled their wealth from.

Do the people in that room yesterday think the Pilatus Bank debacle caused Malta reputational harm? They didn’t say so. They did blame the journalists who wrote about it though. And they blamed the politicians who ‘quibbled’ about it until the United States attorney indicted its owner and the European Central Bank shut it down.

Perhaps they could have spoken to Juanita Bencini about another client of KPMG’s, Christo Georgiev. He too set up a bank in Malta in spite of a record of investigations on illegal capital smuggling out of Venezuela and Greece. He quit Luxembourg when financial investigators were closing in on him there and he set up here.

We’re told several inexplicable millions passed right through his Maltese bank that appear to have come from organised crime. Several thousand perfectly innocent clients were thrown into penury because no one raised the flag about the rot that was going through that bank. Many businesses ended up shutting down and laying people off.

Who damaged Malta’s reputation there? The bank and its auditors or the journalists who listened to what their suffering customers were telling them?

Maybe they hadn’t read the news on my blog yesterday but dastardly journalists in Spain were reporting that a Maltese company — Malta Fish Farms, MFF Ltd — smuggled illegal tuna through three European countries on their way to Spanish markets.

Their auditors are also KPMG.

You’d start to think that all you need to get a bad reputation is having KPMG as your auditors.

Of course, you could do worse. Your auditors could be Nexia BT. They weren’t in the room and yet no one said they were harming Malta’s reputation. The infuriating capriciousness of Daphne Caruana Galizia was, but not Brian Tonna and Karl Cini.

They did mention the quibbling politicians though. I expect they were complaining about Simon Busuttil because he quibbled about Brian Tonna — the auditor — publicly admitting taking a loan from his client Keith Schembri against every rule in the book.

Since they’re practitioners in an industry that draws up ex post facto loan agreements to justify money transfers that can never otherwise be justified they knew exactly what that meant. Especially when the loan was repaid in one fell swoop inside a Pilatus Bank account. But KPMG was the auditor there, so that’s fine then.

Keith Schembri and Konrad Mizzi were not quibbling when they resorted to financial services practitioners in Panama. There was nothing trivial in their request to bankers halfway around the world to hold on to money for them they were not supposed to have.

None of the practitioners in that room yesterday complained Schembri and Mizzi did not come to them to set up their accounts in March 2013. What does it say for Malta’s finserv providers’ reputation that the prime minister’s chief of staff and his pal the energy minister bought services they sell from a banana republic across the Atlantic using one of their colleagues to set them up?

Did they harm Malta’s finserv reputation or was it the journalists who discovered them or the politicians who ‘quibbled’ about what they did?

Here’s your problem Joe Zammit Tabona, Andrew Manduca, Juanita Bencini and the rest of you institutionalised veils for tax dodgers and sundry crooks.

You are as qualified to determine what is harming Malta’s reputation as a tumour is eligible to explain why their host is dying.

Your utter inability to diagnose what is wrong here is right at the heart of Malta’s foul reputation. Because no one will be scandalised if a crook is caught. The world’s shock is a consequence of your ‘there’s nothing to see here’ attitude.

You may be rather less amusingly incoherent than Edward Scicluna who will on stage one minute say that PanamaGate is a matter for historians and the next minute say that’s not what he really meant.

But your point is just the same. It’s not that you think there’s nothing wrong with what people like Ali Sadr Hasheminejad and Christo Georgiev were doing in Malta, and who knows who else you’re covering up for. You’re just angry they got found out. You’re angry at the nosy journalists and the quibbling politicians. And a little at the financial practitioners who are not as smart as you are at drowning the stench in the crushed lavender of glossy brochures.

From the Times’ report of Edward Scicluna’s speech of yesterday: “The Finance Minister also spoke about the contradictory view between those who saw a free-for-all in Malta, when compared to the reality on the ground where people actually struggled to open up a basic bank account”.

It’s not a contradiction, Minister. We the common mortals struggle to deposit a hundred quid precisely because you preside on a system that allows Russian oligarchs, Calabrian ‘Ndranghedisti, Iranian double agents, Azeri and Angolan dictators, senior Turkish politicians and who knows who else use our country as their backyard laundry.

What used to be our country has become theirs whilst those people in the room worry that the profits they are making might be dented by the discovery of what you’re trying to cover up.

And of course it’s Daphne’s fault, isn’t it? 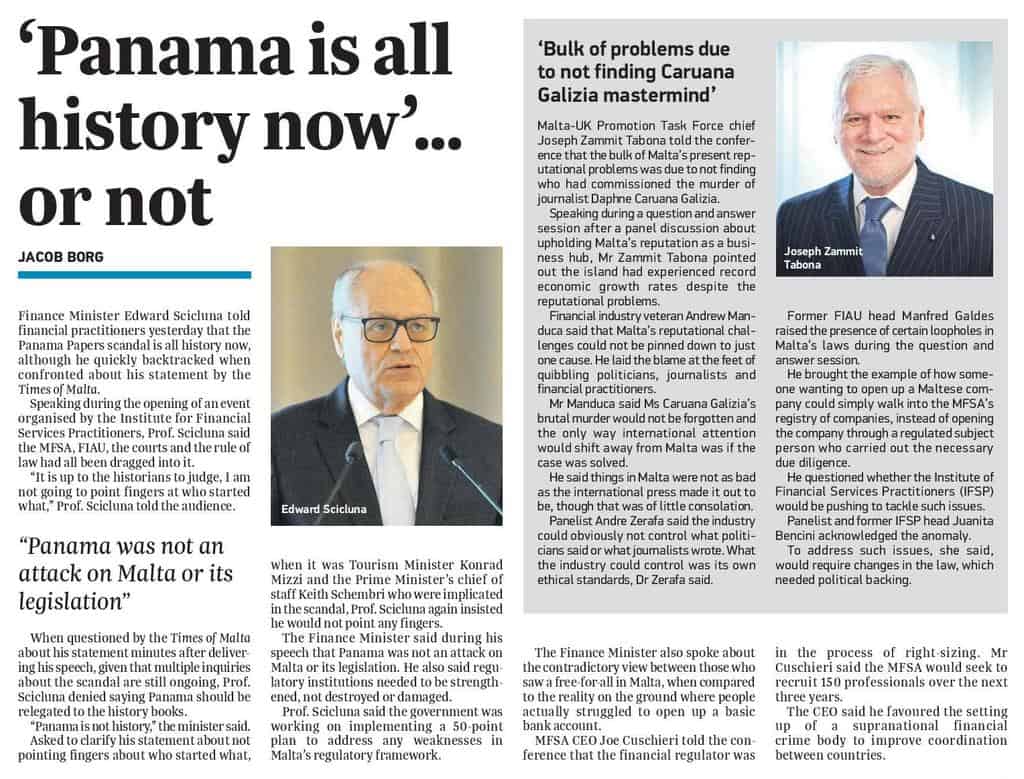 Previous:Joseph Muscat to Socialists: “Move away from social justice, equality and such things”
Next:Ihre Papiere, bitte