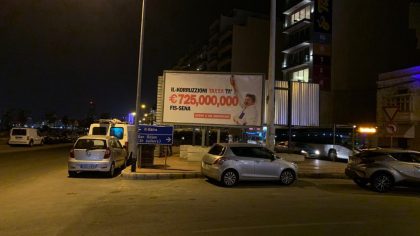 A lot has been made about the billboard wars at the start of the European and local election campaigns of the political parties. Why write a thousand words about it when James Debono says all that needs to be said in 20 words?

I will limit myself to the crap Clyde Puli had to deal with from party supporters unhappy about a “negative” PN campaign. Some of those complainers were hard-core Adrian Delia supporters (and presumably still are). I was at the wrong end of some rather intimidating messages from some of them when I dared point out inadequacies in Adrian Delia and his choices for the party.

On a purely argumentative level I sympathise with Clyde Puli’s predicament. He would rather not have had to, but he was forced to explain to the critics from within the PN ranks that the job of an Opposition party is to oppose. Labour taunt the PN for being “too negative” but Clyde Puli asks people if they remember just how incessant, unrelenting, vicious, and unfair Labour-in-Opposition was in its criticism of everything that was going on at the time.

Seemingly these PN supporters who want their party to speak like it was high on unicorn piss have indeed forgotten what life was like in the glory days of pre-2013 Super One.

But Clyde Puli and the rest of the PN leadership have no one to blame for that oblivion but themselves.

Adrian Delia’s campaign to take over the leadership of the PN was an effort to vilify the “failed strategy” of his predecessors. Somehow politics before the New Way was misguided, even wrong. The New Way promised hippy happy politics people would love to hear.

The supposed logic is that people don’t like to hear about corruption so let’s do them the favour of not speaking to them about it. I could perhaps suggest that strategy to my bank manager in order to avoid awkward conversations if I’m late with my loan repayments.

Clyde Puli – now – is right. If an Opposition party is going to be of any use, its job is to highlight the shortfalls of the government party. If those shortfalls include the systematic daylight robbery of the people’s wealth by kleptomaniac Ministers, it would be criminally collusive for the Opposition to overlook them.

It took Adrian Delia’s administration too long to realise what their job is. And I’m not saying I think they have realised it by now. But they are certainly trying to give the impression that they do think it is wrong for Konrad Mizzi to remain in power even if they refused to say so for the better part of 18 months. About bloody time.

Truly a case of too little, too late.

Giving people the misguided hope that optimism alone amounts to a political strategy has consequences in the longer term. The PN is living them.