It’s alive! Alive, I tell you!

Robert Arrigo was not wrong in expressing frustration about some of the stuff people put on Facebook. Messaging in politics used to be a science. You had trained people who thought words through, evaluated them against the data they collected, tested them in focus groups, and exercised discipline and coordinated speakers to ensure the public can recognise a party’s message from the rantings of a loose cannon, or worse many loose cannons.

You could blame Facebook for making it so easy for people to say what they think without thinking — the paradox is intentional though it makes no claims for literary marvel.

But back to Robert Arrigo. Look at this post of his from today.

It’s like that scene from Monty Python when the undertakers walk around the village collecting the dead because of the plague. And one of those thrown in the court protests feebly ‘I’m not dead yet’.

This commenter (the second one) summed it up well. 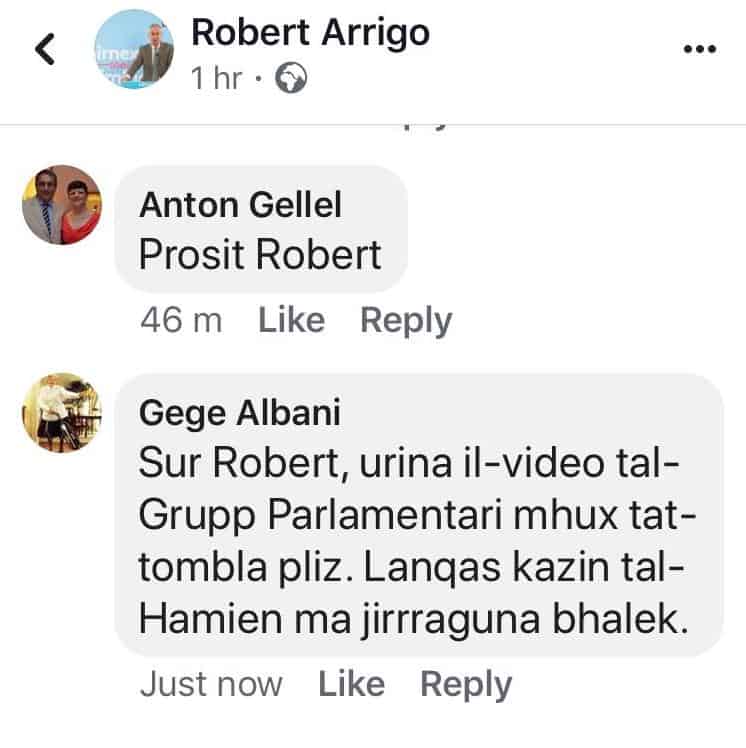 In that answer too, the PN shows signs of life. In the midst of the tired, dicrepit degeneration the green shoots appeared at the Parliamentary Group. I’m told Adrian Delia put a very feeble defence during the 7 hour marathon meeting. But he repeatedly spoke with contempt about the report filed by the youth wing of the party — the MŻPN — that clearly documented what the party needed to fix.

Adrian Delia asked ‘who does the MŻPN represent’? It was a rhetorical question intended to reach the answer, obvious to him, that they have no legitimate reason to even have an opinion about him, he the great leader “elett demokratikament mit-tesseratti” t’għajni.

He shows he misunderstands what a political party is. Among other things he also does not understand, a political party is the field for the next leaders. If he were to become prime minister just where did Adrian Delia think he’d be recruiting his Cabinet Ministers from?

He’s already told the existing MPs they’re “not his team”. This great democrat has already told the only people in the PN who actually asked and obtained the vote by the people that as far as he’s concerned they’re ripe for the knackers. Now he’s saying that the MŻPN have no legitimacy either. They represent no one, he says.

So where is he getting his team from? Does Pierre Portelli have a secret orphanage somewhere?

The MŻPN represent the future which his insistence to remain as Leader of the PN suggests he wants to belong to as well. Of anyone with a right to speak about the future of the PN and the future of Malta, the MŻPN are by far the most eligible.

In 1977, when Ġorġ Borg Olivier thought he was immortal (and unlike Adrian Delia he had a thick album of acheivements to look back to that perhaps excused his error), the MŻPN was a catalyst of change. They fearlessly challenged the status quo. It is only one of the earlier chapters of Louis Galea’s career in politics that as a youth leader (who represented no one but the PN’s future at the time) helped move the slumbering behemoth that was the PN to make the changes it needed to becoming a winning force. Including chucking its leader because he could never win another election.

Yes, Robert Arrigo, the PN is showing signs of life. But that’s not at the tombola. It’s in the politics. In the young people that still think the PN should be a force for change and a force for good.

If you know what’s good for this party and for this country you should be making way for them.

The MŻPN elects officers in all branches of the party, all its structures, all its organs. Women and men of tomorrow, our country turns its lonely eyes to you. Get busy. Today.