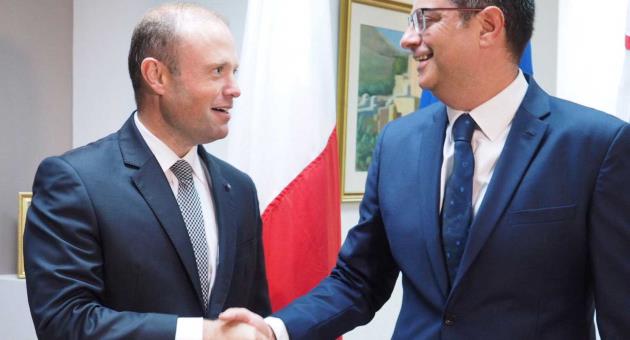 Remarks by the two party leaders yesterday had one common underlying theme, if you look close enough. They both want us to march in their platoon, but it’s really one tune they’re playing.

Consider how Joseph Muscat yesterday said he was worried dissent within the PN might mean he would not secure the two-thirds majority he needs to rush through Constitutional changes he designs. So the one thing our Prime Minister is worried about is that he does not have control of the entire Opposition party but only of a portion of it and that portion may not be enough for him to be able to consolidate his powers without having to explain himself.

People speak of their fear that Joseph Muscat’s Labour Party might be inching towards a two-thirds majority in Parliament. They say they worry about that because Joseph Muscat would then be able to over-ride Constitutional restrictions, such as they are, and rule by decree.

What they don’t realise is that this state of play has come to pass already.

Consider how today Parliament is due to debate changes to the Constitution the government is arguing arise from the advice of the Venice Commission but are really a consolidation of Joseph Muscat’s direct control on the constitutional office that has the power to decide whether he or any of his colleagues are prosecuted for suspected crimes.

The net effect of the changes if they were to pass through Parliament would legally be zilch. Politically however they would get the Council of Europe and the EU off Joseph Muscat’s back because he’d be able to say ‘look, we’ve started the reforms and even the Opposition back us’.

In effect therefore these changes would make a bad situation, worse.

Joseph Muscat does not need the entire Opposition to support him. He just needs some of them to make up the difference between the vote he controls in his group and a two-thirds majority.

We have not yet heard what line the PN Parliamentary Group is going to take in Parliament today. We don’t know that there is a line. As far as can be ascertained the Parliamentary Group has not met for months, certainly not since today’s bill has been published. The Executive Committee of the PN has not discussed this issue, mired instead in debating whether Jean Pierre Debono should be made an MP again.

The way Joseph Muscat spoke yesterday sounds like he’s been given reason to believe by the leadership of the PN that they would like to back his changes but are not sure if they can secure the support of the other Members in the Group.

From the point of view of civil society campaigners, it would be horrific to see these changes rushed through without proper public participation and scrutiny. And if the Opposition were to support the changes it would be aligning itself with the government against the wider community.

Which is why Adrian Delia’s remarks of yesterday about him wanting people to “talk about unity” because they are tired of dissent is so abysmally hollow. In spite of the fact that he continues to waddle from one devastating crisis to another, Adrian Delia persists in the assumption that everyone owes him a moral obligation of falling in line with his own views.

The truth is the opposite. If he supports Joseph Muscat’s consolidation of power that galvanises his impunity and that of his colleagues, the moral obligation of the Oppositions Members is to defy him. Unity here is nothing but Vichy collaboration. It is worse than timid appeasement. It is compliance with the hostile take-over of our institutions that has been underway for the past 5 years and is now nearing its final denouement: the Constitutional affirmation that no one can touch Joseph Muscat.

It is incredible to me now that so few hours before this vote is taken, we do not yet know what the PN makes of these changes. Adrian Delia did not mention them in his public address yesterday. He was busy telling his audience why everyone was wrong to contradict him. And yet the day before he was trying to take credit for the deserved co-option of Kevin Cutajar he had a week before worked so hard to prevent.

HAL 9000 broke down because it was given contradictory instructions. Adrian Delia is not even the smartest computer ever built and yet he wants to both lead an Opposition Party and serve the interests of the government he is supposed to oppose.

How can you unify that?

Meantime Adrian Delia is now talking of constitutional changes of his own but in his case the constitution he speaks of is the statute that governs the PN. He thinks there needs to be “restructuring” to avoid the chaos the PN is undergoing. Sounds like he’s thinking of rules for banning dissent.

Joseph Muscat and Adrian Delia are like the Sith. There are always two. Adrian Delia is the permanent apprentice.