By the end of 11 June 1940, World War II claimed the lives of the first 18 victims gunned down by enemy fire. Some of them were children.

More civilian casualties would be logged that first day of war, 80 years ago, some of them children.

Carmelo Galea, 40, died in Birkirkara. Joseph Ancilleri and Maria Fenech died in Bormla. Maria was 6 years old. But she wasn’t the youngest victim of that first day of war. Baby Doris Galea lost her life at just 5 months. A bombing over Gżira claimed many lives: Michael Camenzuli, 39, Lilian Doublet, 7, Mary Doublet, 46, Giuliano Micallef, 65, Giovanni Trapani, 48, and Rosina Vassallo, 33. Paola Galea, 37, was killed in nearby Msida. And Giuseppe Ellul, 36, was the first victim of far-flung Mqabba.

Eighty years ago today, stunned by the devastation of one day at war, most of the people of this country became overnight refugees. People living near the harbours took what they could carry and scrambled over the dust and rubble, walking by gaping holes in their towns, wounds and scars that looked terminal that day but would be mere scratches compared with the gashing wounds that would be inflicted during the three, hellish years ahead.

Those who could, walked or rode out of their harbour towns towards the countryside. They were welcomed in the homes of their cousins in the west and north of the country. Until they became inconvenient and unwelcome. There was no escaping the island. Nowhere to run. The choice was between squeezing into the homes of annoyed relatives or to go back to what was left of the town, playing Russian roulette with bombs dropped randomly from above.

Soon many would lose relatives to bombing, more would lose their homes and all that was in them. All would know hunger and depravation. No one would escape the fear of invasion, of punishment from new masters for collaboration with the old.

Suspicion of people thought sympathetic with the enemy was rife. Episodes of solidarity between neighbours shone but so did the ugliness of egoism, exploitation and unfairness.

The war would distil Malta’s breed of heroism. It would not be the heroism of self-sacrifice, courage under fire, rushing into the jaws of death to bite bullets meant for friends. It would be a heroism of endurance, patience and stoicism. No stiff upper lips here. No stirring will to defeat evil. There was complaining, squabbling, cheating and skimming. There was defeatism and scepticism.

But there was shared suffering, terrible losses and horrific waste. And a determination to survive, to still be there, to be alive the morning when there would be no more bombs.

This country does not preserve the memory of the suffering of war. It is why people willing to misconstrue it find the space to do so.

The eightieth anniversary of the start of the war on Malta is passing largely unmarked and unremembered. We forget the aggression of fascism, the inherent injustice of the wielding of power by states stepping out of international law and order. We forget being on the wrong end of mindless violence and the use of civilians as legitimate military targets. We forget the madness of being trapped, unable to escape from random bombings. We forget the numbness of the sight of children torn apart in the street covered in dust and smeared in blood.

We forget being thought unable to have our own will, not to conquer and exploit, but merely to survive and live on. We forget being treated worse than animals, besieged, starved, expected to betray each other and surrender in the face of mindless hate. We forget our mothers seeing the supply lines of food sunk inside our harbours as their children gnaw on mouldy scraps.

On the 80th anniversary of the death of the first victims of war on Malta, a man led a small army of angry, white friends and outstretched his arm in a Nazi salute in Valletta, the city that lost most victims to the bombing of fascists and Nazis. He marked the anniversary too, signifying the day this country became ready to inflict on others what it forgot having suffered itself. I don’t mean the bombings of course. But ignoring the suffering of people when one can help, in my books amounts to inflicting it. It would have been in the books of the survivors of 11 June of 80 years ago too. Maybe. 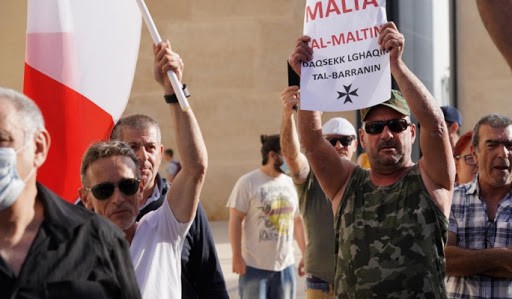 Previous:Ali Sadr trial judge warns prosecutors of disciplinary action for botching trial
Next:We need to hear it from Anġlu Gafà: What should be done with Chris Cardona?