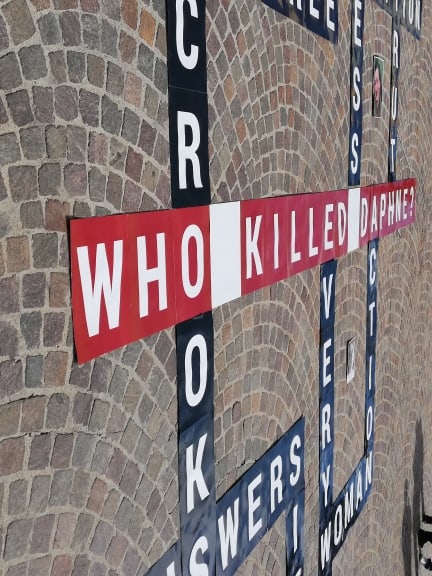 Martina Farrugia sums this up in her astounding post on Facebook where she deftly describes the main events as if they were scenes in ‘some overzealous, underfunded film plot’ except ‘it’s real life. This has been going on for over 3 years and we’ve sat back like this is a bad sitcom.’

This ‘bad sitcom’ began long before Daphne Caruana Galizia was brutally assassinated with decades of harassment, intimidation and attacks on the journalist. These include arson attempts on her home, the killing of her pet dogs, being hounded by an angry mob egged on by the then Mayor of Żurrieq, Ignatius Farrugia, 10 days after Partit Laburista swept to victory in March 2013, being the sole target of Glenn Bedingfield’s government blog which, he argued after her callous murder, was aimed at ‘giving her a taste of her own medicine’. And let’s not omit Neville Gafà, self-confessed commandeer of pushbacks to Libya who doesn’t flinch at corpses on board, who stalked Daphne on the days leading up to her murder.

While many became spectators (or, worse, celebrants) to events resembling a movie mash-up of Quentin Tarantino and The Keystone Cops, protests began in the aftermath of the assassination and a group of Occupy Justice activists met with Muscat to demand the resignation of the Police Commissioner and the Attorney General. It took 2 years, but the rabbit-eating Lawrence Cutajar has finally resigned, albeit to sign up for a lucrative position at the Home Affairs Ministry on the very same day his resignation was announced.

You couldn’t make it up if you tried is something we stopped saying a long time ago, a point underscored by Martina Farrugia’s summary of the off-the-scale absurdity of the situation we’re in. It’s beyond a joke, right?

But it’s not funny. Daphne Caruana Galizia was assassinated and the people involved are clearly in and connected to Castille. In a bad B-movie plot, one of the main suspects, the Prime Minister himself, would stride on to the set and declare that the assassins had been caught. In Malta, that’s what Muscat did while his Police Commissioner munched his popcorn silently.

In a bad B-movie plot, the culprits would enact ‘Out out damned spot’ on a daily basis, a clichéd means of revealing their guilt to an audience fed up with spoilers. Bored with the predictability of the film, they change channels or, more insidiously for the real world, they switch off.

In the real world, we have the callous assassination of a journalist who singlehandedly exposed the villains in this story. We have a journalist who knew that the snap election in 2017 wasn’t caused by her expose of Egrant (cue a further sub-plot named The Mocked-up Magisterial Inquiry) but that it was the result of something ‘crucial…bad enough to have driven Muscat to take drastic action just two months into Malta’s much-vaunted presidency of the EU Council.’

Daphne was struggling to pinpoint the reason, unaware it was her own assassination she was trying to foresee:

The election is going to be held now because Muscat and his henchmen want a fresh mandate to govern before whatever it is they know will happen does happen. They are so worried about this thing, whatever it is, that they are going to sacrifice a whole year of the power they love so much in order to obtain another five years of it.

We need to know what this thing is that they fear so much that they want it to happen after they are re-elected to another term in government, and not before.

Daphne was right. Daphne was always right and since ‘this thing’ happened, we’ve heard the lies. We’ve seen the propaganda. We’ve run out of vocabulary for ‘unbelievable’ and ‘corruption’. Too many have sat in the cheap seats or revoltingly cheaper, throwing out insults and accusations at a family who, despite their grief, are fighting this criminal government every step of the way.

We’ve watched, incredulous, as artificial plot devices abound aplenty. The Egrant Inquiry – designed to whitewash your whites whiter than white. Bags of cocaine posted to 4 leading opponents of this criminal government in some deluded hope that David Casa, Simon Busuttil, Jason Azzopardi and Karol Aquilina would be revealed as drug-crazed loons. A last-ditch attempt by the Partit Laburista to foil the Council of Europe’s insistence on a public inquiry by dragging Azeri bandits into the arena in a Eurovision-style parody of justice, not to mention decency.

Every move they make compounds their guilt. Every insane scheme they hatch up shows more blood on their hands. It really is like a diabolical whodunit and we groan because we’ve known who did it from the start. We watch them go through hoops to try and evade capture or, in the case of Konrad Mizzi, they sneakily hide out in London like a child covering his face with his fingers believing he’s invisible.

We’ve watched Houdini in the guise of Keith Schembri – the guy who leaked information about the murder investigation to Yorgen Fenech, charged with commissioning the assassination – be arrested then released without explanation. We’ve watched the Artful Dodger announce his resignation, hang around for 6 weeks in between jaunts to London and Dubai, and then pop up like a bad penny to preach advice about the post-COVID economy. The Artful Dodger who, sharing a private Whatsapp group with his buddies, Keith and Yorgen, happily received watches and wine from a man who he knew at the time (and no doubt always knew) was a main suspect in the murder case. After all, at one of these parties, Joseph and his Marigold missus drunkenly sang along to ‘You can’t touch me’.

And now Chris Acapulco Cardona, more than a side actor from the start, has been accused of paying his assassination pals €350,000, having already been ‘framed’ by a letter sent to Fenech by Schembri via their mutual doctor, the same doctor who accompanied Schembri abroad for cancer treatment which Schembri so furiously denied. We already knew Cardona was friends with 2 of the assassination suspects, attending bachelor parties as you do. We already knew Cardona had got down and dirty in a German brothel as, to avoid his phone records being shown in court, he dropped the libel case as quickly as he dropped his pants. Like Schembri, Muscat and Mizzi (not forgetting all the many other actors who played their part), Cardona, Deputy Leader of the Labour Party, remains free as a bird.

We watch criminals like Schembri snitching on each other and we may question the reliability of Melvin Theuma’s evidence given his pardon came from another prime suspect, Joseph Muscat. We watch the perverted justice system of Malta predictably fail to do its job. We watch those in the police force not arrested for fraud leave the likes of Cardona to deny all accusations without twitching a muscle to make an arrest. And we watch the Caruana Galizia family being forced to listen to gruesome details about the murder of their loved one in the knowledge that they can bump into the killers both inside and outside court.

The answer as to who killed Daphne is in the plural and Malta Government is a masquerade for a criminal organisation with its influence and networks stretching far across the globe. Henley and Partners act as one of its gateways and it was Christian Kaelin who first informed Daphne of the 2017 snap election.

Yorgen Fenech may have commissioned the assassination. Chris Cardona may have passed huge sums of money to the assassins. Melvin Theuma may have acted as a go-between. Keith Schembri, in between enacting poison letter fantasies, may have slipped information to Fenech and Silvio Valletta may have gone off to watch the football with the man he was supposed to be investigating. Justyne Caruana may have asked about her husband’s whereabouts while Owen Bonnici was busy clearing the protest memorial before being found guilty of violating human rights. Oh, and Joseph Muscat, affectionately known as ix-xiħ, pops up in Theuma’s secretly recorded conversations as played in court. This leaves Neville Gafà fixing illegal pushbacks to Libya. Were his captives forced to sing Viva l-Labour on pain of death? Meanwhile Christian Kaelin’s busily selling passports and it’s business as usual for Nexia BT.

As Matthew Caruana Galizia makes clear, the assassination of his mother is inextricably connected to the corruption she exposed: ‘Mizzi and Schembri’s Panama companies, Nexia BT, Electrogas, 17 Black, and SOCAR were “weapons used in the same crime of corruption that led to the assassination”.’  When all the criminals are finally rounded up and brought to justice, the prison cells will be bursting at the seams. To sup with the devil, you need a bloody long spoon. 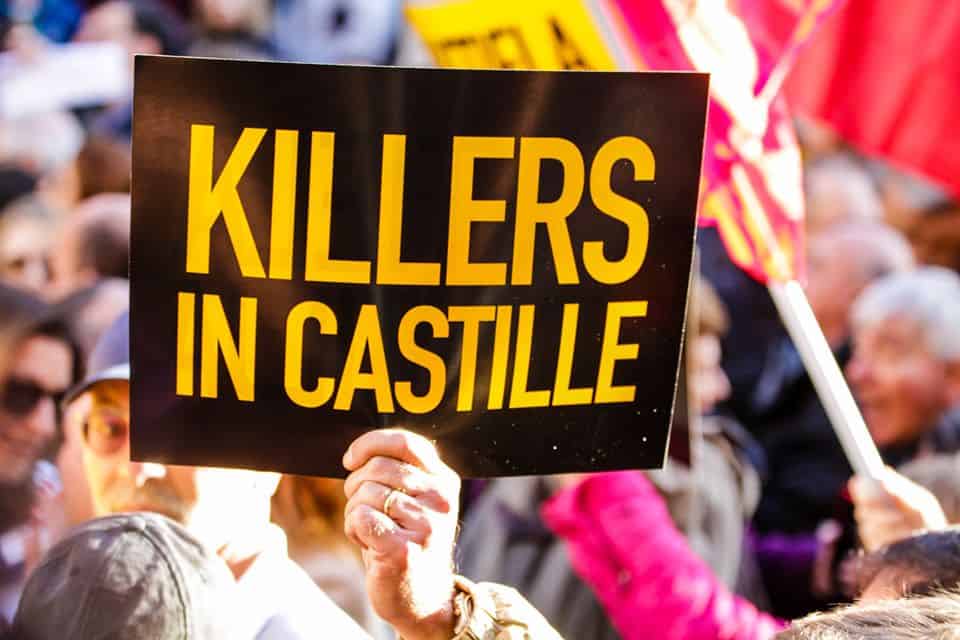