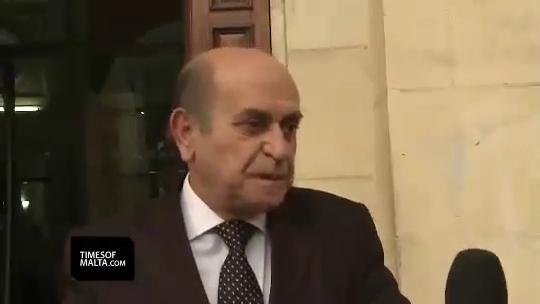 Joe Brincat wants the Ombudsman to resign. And if the Ombudsman doesn’t, Joe Brincat wants street marches in protest against him. As they often like to say about anyone who disagrees with them, Joe Brincat is a nobody. But he’s writing this on the official media of the Labour Party. An op-ed on Pravda is not something you can dismiss as loony fringe. It’s loony. But it’s not fringe.

True enough, the Ombudsman’s remarks about how corruption chokes the soul of our democracy were astonishing. Not because they weren’t self-evidently right. But because our institutions are perennially dumb, deaf and mute. And the Ombudsman broke the silence.

As a rule, our institutions try to navigate a country where everything comes in twos by trying to look like they would not criticise a side for fear of seeming to side with the other. The Labour Party forces them into this forced neutrality because that’s all it needs to legitimise its mad ways.

Labour uses the same technique to bully independent journalists. Every journalist is supposed to wear a hair shirt and whip their backs bloody over Tonio Fenech’s arloġġ tal-lira if they’re ever going to speak about Konrad Mizzi siphoning off millions into off-shore companies on deals that cost every tax payer and energy consumer big money in a rolling daily basis. Tell you what: get Konrad Mizzi to give back the money he’s cost us and we’ll organise a collection to buy him an arloġġ tal-lira too. Two. Two thousand: and we’ll still be much better off.

Some journalists kneel under this pressure of false equivalence.

As do some activists, especially those that would support the Labour Party if it wasn’t plagued with corruption and crime.

The Ombudsman took no heed of this. He looked at the job he has today and he set about doing it. He’s dealing with a government that is secretive, uncooperative with institutions, cavalier with the law, populist in its decisions, corrupt and embroiled in crime. By recalling the flaws of previous governments, he would achieve nothing right now.

Nor would we achieve anything by doing what Joe Brincat expects from the Ombudsman: shut up, say nothing and live in fear of the retribution of the state.

But there’s one thing Joe Brincat is irritated with above anything else: the point the Ombudsman made that civil society protesters brought down a corrupt administration. Joe Brincat’s anti-democratic contempt for civil society came through when he personally intervened to argue we had no right to protest in front of court to call for justice for Daphne Caruana Galizia. He had the audacity to argue that if we were to be allowed to protest, his rights would be breached. The court sent him flying.

But Joe Brincat is like a pebble. The water of truth and justice can reach him, go all the way around him, beneath and above. But not a single drop will seep inside and his totalitarian hatred of anything which does not worship his political party remains as dry as the inside of that pebble. And as hard. And as pointless.

Previous:LISTEN: How Muscat and Mizzi made Enemalta the SPV for corruption.
Next:Konrad Mizzi cronies switch roles at Enemalta board