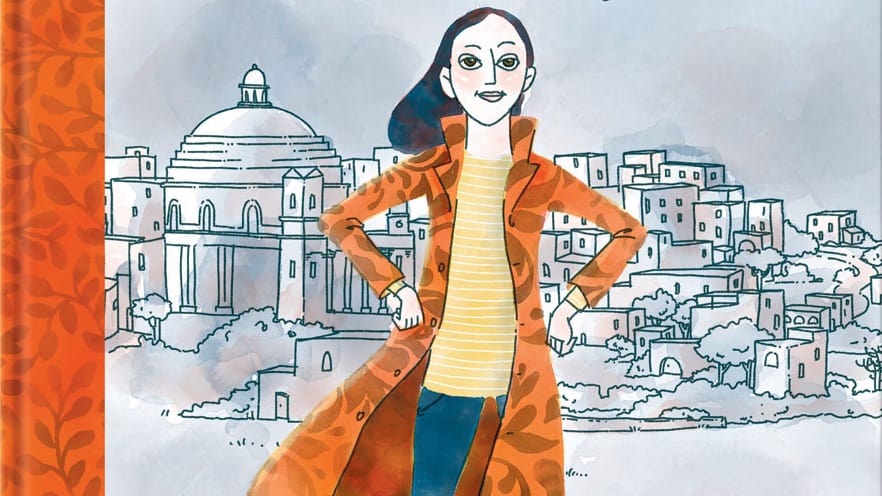 Detail of front cover of “Fearless: The Story of Daphne Caruana Galizia” by Gattaldo.

The original Roman calendar had only ten months, and October was the eighth month. January and February hadn’t been added to the calendar yet. Like its neighbouring months September, November, and December, the numerical name stuck even after Julius Caesar expanded the calendar year from 10 months to 12.

October has a special meaning in Malta. It was the month when Daphne Caruana Galizia was executed by the Maltese mafia. It was the month when a journalist, a wife and a mother was taken away from her family because of the greed for money of crooks, both political and criminal. Three years ago the world’s eyes turned and focused on the corrupt island in the Mediterranean which was governed by the most corrupt person in the world. It started civil society protests which was the reason for the downfall of the corrupt Joseph Muscat and some (not all, yet) of his crooked ministers and officials.

The spotlight is still there, focused on the government, with court proceedings unveiling a web of corruption, money laundering and close collusion of politicians and high government officials with criminals. Facts coming out from witnesses in both the Daphne Caruana Galizia inquiry and the compilation of evidence against the alleged mastermind of her assassination, Yorgen Fenech, would make a great script for a six season criminal series on Netflix.

Earlier this week our fresh prime minister Robert Abela again put both his feet in it when he gave an ultimatum for the Daphne Caruana Galizia’s inquiry to be concluded by the 15th December. He will not be taken seriously. He will not dare challenge the Council of Europe. Pieter Omtzigt who immediately replied to Robert Abela indicating that “I note that the inquiry’s terms of reference state that it ‘shall endeavour to conclude its work within a time frame of nine months without prejudice to the proper fulfilment of these terms of reference’. This does not seem to me to set a fixed time limit. Instead, it seems that the time limit is deliberately flexible, in order to allow the inquiry the time it needs to fulfil its task.”

In its letter the Committee said that the Inquiry was set up so that Malta would respect all its obligations under Article 2 of the European Convention on Human Rights. An inquiry established under this article should be ‘fully independent’ and has to be totally free from interference by the investigation’s subject matter, in this case the Maltese State.

Robert Abela must be feeling hot under the collar as new evidence emerges showing direct involvement by politicians and high government officials. Joseph Muscat has already been called and interrogated ‘under caution’ for one and a half hours at the Police HQ. His red face, his shifty eyes and that look on Pawlu Lia’s face (Joseph Muscat’s attorney) showed that it was not a mere friendly chat over coffee and biscuits. Quite the contrary.

And enter Robert Abela who publicly said that Joseph Muscat is not under investigation. Did he take his predecessor’s words as true or is he being kept up to date by the police? Abela is in a dilemma. He is not sitting on a fence but treading on a tight rope. His actions and words say it all. He is backing Joseph Muscat – is this part of the famous diabolical plan?

And then there is the news that thousands of Whatsapp conversations uncovered by Europol on Yorgen Fenech’s mobile phone. There are thousands of chats with Joseph Muscat’s cabinet, Keith Schembri and not surprisingly with the PN leadership. This must be nerve wrecking for Joseph Muscat and his crooked friends. Till now we know that there were about 700 messages between Edward Zammit Lewis and Yorgen Fenech. We still do not know what they were about but perhaps they were not all about pasta recipes. No wonder Robert Abela is panicking and desperately trying to close the inquiry as quickly as possible, with all the sleaze coming out!

Also in October the PN tesserati will elect their new leader. Everything is pointing to a Bernard Grech victory. The fact that survey after survey is showing him leading by a considerable margin is encouraging and the data that shows he is gaining popularity against Robert Abela who has seen the first dive in his ratings since January. But one has to tread very carefully here. Surveys can be deceitful. The tesserati hold the future of the Partit Nazzjonalista – they can either choose to bury their party to history or vote for a chance for the party to begin to slowly return to its former glory when it was the party for change and progress through Independence, European Union membership and the euro. A radical change in the leadership and the way politics are done has to prevail.

The Organisation for Economic Co-operation and Development (OECD) has now downgraded Malta from a “largely compliant” jurisdiction, to a “partially compliant” financial services destination, one notch up from the OECD’s black list of non-compliant financial jurisdictions. The OECD complained Malta has not followed 2013 recommendations to improve supervision. But this is aggravated by initiatives that have made Malta’s situation worse. It was only in 2020 that the government decided to strike off data about some 10,000 companies from the publicly available registry of companies.

Also coming this October is a new picture book by artist and illustrator Gattaldo, who grew up in Malta and left when he was 20. The book ‘Fearless – The Story of Daphne Caruana Galizia’ is aimed at encouraging children to learn how to get more information and increase their knowledge of complex situations. He recounts her life story through colourful illustrations showing her role as an investigative journalist fighting corruption.

And October will bring the Committee of Experts on the Evaluation of Anti-Money Laundering Measures and the Financing of Terrorism (MONEYVAL). Grey listing Malta might be an economic disaster, worse than Covid-19. Legislating is not enough. The Committee wants to see the legislation turning into action, real action against persons involved in money laundering and tax evasion. Last month the Police Commissioner stated in a press conference that by the end of August there was supposed to be a major arraignment regarding officials from and related to Pilatus Bank. Until today, nothing of the sort happened.

Testifying at the Daphne Caruana Galizia inquiry chief finance civil servant Alfred Camilleri was asked to comment about the possibility of Malta’s grey listing by the Financial Action Task Force (FATF) if Malta fails its upcoming Moneyval test. Replying to questions by Jason Azzopardi, Alfred Camilleri said that grey-listing by FATF “will impact investment upon which we greatly depend because we will become less attractive. Our success is built on trust and correspondent banking. Banks aren’t charities. There is so much emphasis on anti-money laundering that if a correspondent bank sees this risk and fears being fined by its regulator it also faces reputational risks. The reputational risk cannot be quantified.”

People associate October with falling brown leaves. This October we might be seeing other falls. Some might feel a pang of expected panic and fear with its arrival while others are looking forward to it. October looks promising. Instead of a dull autumn month it can shine and be far better than September.

Previous:They would say that, wouldn’t they?
Next:Somebody get this guy some help