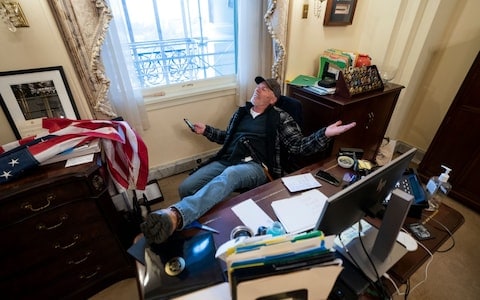 I wonder if Ranier Fsadni would have handed in his piece for The Times of today had he already seen the scenes of chaos and open violent rebellion on the US Capitol yesterday.

The picture of a thug lounging on the chair of the Speaker of the House of Representatives was the sight of painful sacrilege, a bit like the Babylonian sacking of the Temple of Jerusalem.

Of course, he will dismiss the incident as the action of some violent extremists, or even that the rioters were justified to break into the building of the US Congress because they’re right to feel they have been cheated of an election.

But even he might have thought the timing of his piece after yesterday’s pictures was not quite ideal.

When Ranier Fsadni wrote last week to defend Simon Mercieca from the assault of “civil society”, for which mostly in this case read me, he made a reference to the fact that Simon Mercieca is criticised for declaring his support for Donald Trump. Supporting Donald Trump is, at least in my view, a symptom of dangerous eccentricity and an ideological attitude that supports autocracy. They are things I disagree with but not the basis for dismissing academics from their posts. Promoting anti-vaxxer conspiracy theories, however, is. And using the same methods to plant conspiracy theories about matricide in the case of Daphne Caruana Galizia certainly should be.

But I digress. I strongly disagreed with Ranier Fsadni when I had read that article, which is pretty obvious given that he was disagreeing with me. But I can live with that. It is helpful to have an alternative point of view and since no one appointed me HR manager for the university there may be other opinions on whether Simon Mercieca should keep his tenure.

But I could not help spot the Trump apology in that article. It came to full bloom this morning.

The ‘analysis’ of the US election results is beyond pitiful for someone who is not Donald Trump. Ranier Fsadni says “doubts about the election result” persist for the same ‘reason’ that Donald Trump used when he was comforting himself on the campaign trail. How could Donald Trump lose to a ‘loser’ like Joe Biden?

Ranier Fsadni recalls how Joe Biden tried to run for the presidency twice before and did not get anywhere. His campaign this time was lethargic and out of touch. How could he win?

Ranier Fsadni, like Donald Trump, is missing out on the fact that a good part of why Joe Biden won and Donald Trump lost happened before either candidate was nominated for the election. How can one analyse this election result without considering Donald Trump’s conduct during his presidential term? His isolationism, his incoherence, his racism, his disregard for constitutional norms, his crassness.

Campaigning has a lot to do with winning and losing elections. But it is not the only factor. Record, conduct and even external circumstances play a huge role. Frankly if I had a vote in the US presidential elections, I would have voted for anyone capable of stringing a sentence together to see Donald Trump dragged out of the White House.

I appreciate there are many who disagree. I appreciate that politics is polarised and Donald Trump’s qualities, such as they are, make him the most successful vote magnet in the brood of Republican options. But why does Ranier Fsadni account for Donald Trump’s huge popularity in his own voting base while he ignores the resentment Donald Trump creates and how successful he is at mobilising his detractors?

Then Ranier Fsadni proceeds to adopt the other Donald Trump trope: that “there’s no denying that the news itself was doctored against him”.

And here’s more than a little frustration that Ranier Fsadni joins the MAGA brigade in shooting the messenger.

The media have a responsibility to do more than report what presidents say. When presidents lie, and oh my God did Donald Trump lie, the media has the duty to filter out the lies, denounce them and expose them.

Ranier Fsadni goes methodical about the ‘injecting bleach to cure covid’ quote which he says was edited out of context by CNN. The defence is both irrelevant and incredible. Donald Trump’s finest hours in addressing the public about the coronavirus are plentiful. He called it a hoax, a Chinese virus, something that had been dealt with definitively before it even reached the US. He was openly cavalier about wearing a mask. When he was hospitalised for coronavirus, he left hospital before he was cleared, emerging in public without a mask, smiling like the inane, delusional clown that he is.

Why is Ranier Fsadni surprised anyone, even a small majority of US citizens, might prefer someone else to be their president? Anyone else. Even Joe Biden.

The piece must have been written before yesterday’s amateurish but dangerous and violent coup attempt in the most powerful democracy of the world, the country that invented republican representative and federal democracy in its modern form. And yet Ranier Fsadni had the foresight to anticipate “the chances of a smoother right-wing populist, better able at assuaging the concerns of independents, in 2024”.

He says the media may not be credible next time round if they were to try to push back a new populist having burnt their credibility credit fighting, unfairly, Donald Trump. He’s right. What can truth and journalism do against tyrants when ‘independent’ ‘intellectuals’ fall over themselves to take up the cudgel for anti-democratic nascent fascism?