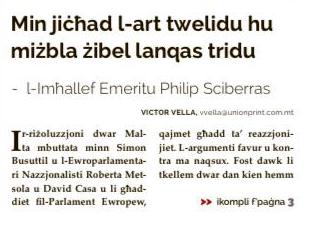 Philip Sciberras, former judge, former Labour MP, a former unsuccessful mediator between the feuding Alfred Sant and Dom Mintoff, former Alfred Sant crony, holder of multiple pensions, long-term informal monopoly-holder of sensitive inquiries commissioned by the government, and vomiter of sundry hate against anything which does not conform with the diktat of his Labour Party, made it to the front page of today’s l-orizzont.

He was quoted criticising David Casa and Roberta Metsola who voted together with 635 other MEPs for a motion expressing concern about the involvement of the Maltese State in the killing of Daphne Caruana Galizia.

The quote translates loosely as ‘Those who renounce their motherland are a pile of unwanted rubbish’. In translation, it sounds reasonably mild. In Maltese “żibel” is a substantial insult. “Miżbla” for readers of l-orizzont and people with memories of the Labour Party’s disputes with the Church in the 1960s touches an unconscious but raw nerve.

The Labour Party’s MEPs voted against the European Parliament’s motion along with 42 other MEPs. None of those 42 is from Europe’s socialist party to which the Labour Party nominally belongs. The 42 come from the proto- or quasi- or fully-fledged fascists that crow on the top right perches of the Parliamentary chamber like vultures hoping for the opportunity to eat into the flesh of the rotting democracy they despise.

Philip Sciberras really does fit with the baby-eating fascists. All that talk of ‘my country, right or wrong,’ that hollow patriotism of unquestioning loyalty to the regime that happens to be running it, fits neatly in that.

The Labour MEPs complained that the European Parliament resolution “does not do justice to the reforms undertaken in the last few years”. There wasn’t much reform to speak of. Though we did manage to force the government to change the way judges are chosen to eliminate partisan favouritism. If we had managed that any sooner, Philip Sciberras would never have been made judge and he would have drooled his brown-shirt nostalgia on l-orizzont without the honorific of “former judge”.

In the meantime, justice for Daphne is nowhere near done and until it is, we’ll continue to displease Philip Sciberras by demanding it. Love of country requires us to. 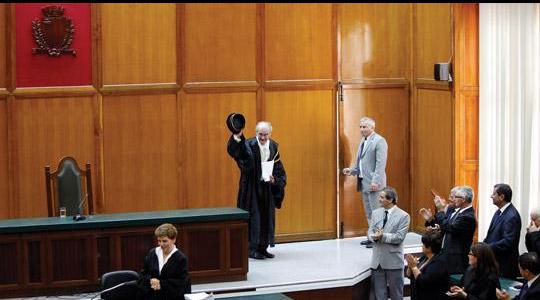