GUEST POST: Michelle Muscat, or How to be Flash Without Cash 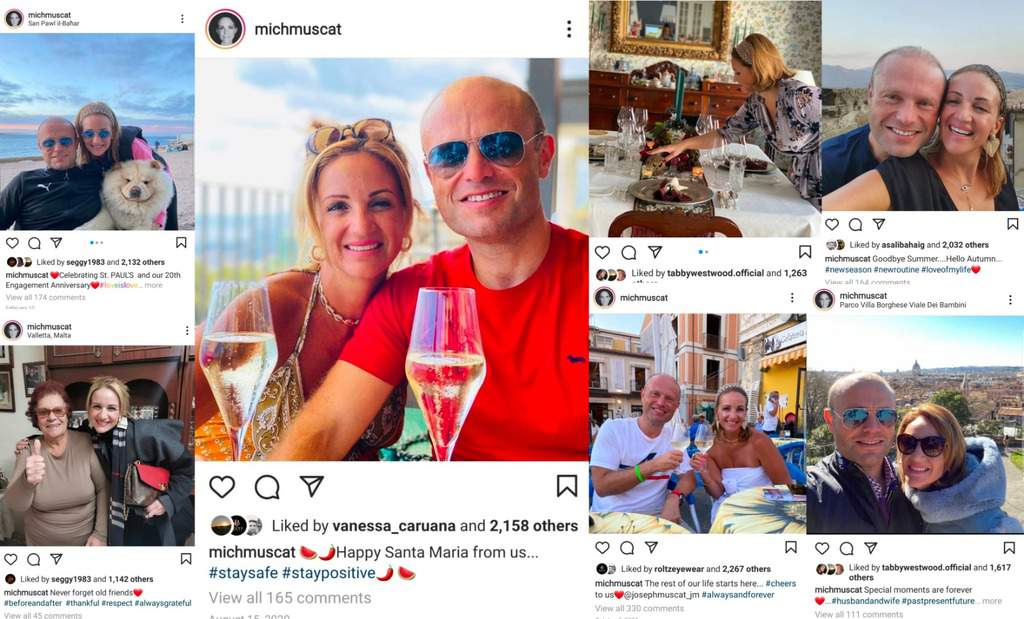 As if by design, whenever Malta seems to be going through a difficult time (which is every day really now), up pops Michelle Muscat on her cloying Instagram account to remind the great unwashed that she’s doing well in her filtered designer kitsch bubble, thank you very much.

Last Wednesday was the start of an even rockier existence for Malta all thanks to her husband’s criminal brand of economics but looking at Michelle Muscat’s Instagram post you would think that on the day that our country was grey-listed we should really, really celebrate their 20th wedding anniversary instead. 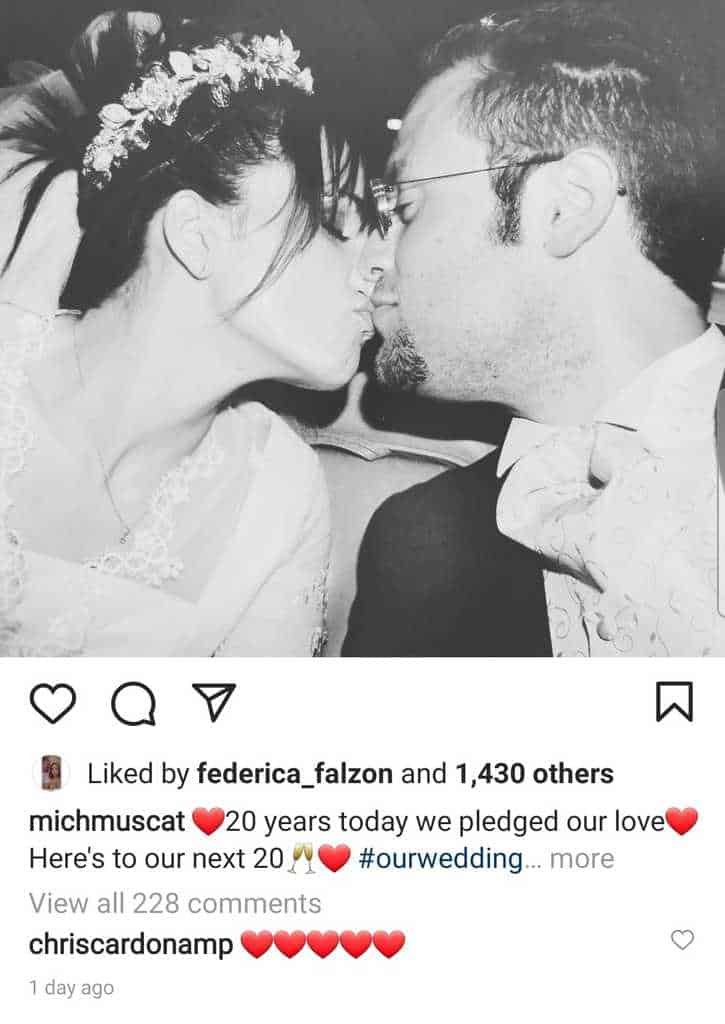 So, she posted a corny photo of the most awkward kiss I have ever clapped my eyes on. I needed Optrex for Red Eyes immediately because I couldn’t stop rubbing them with disbelief. But then Mr & Mrs Muscat were never ones to shy away from PDA however forced and stilted it always seems. I am such a jaded woman who equates political kisses with treating for votes. But I digress. Michelle Muscat says kissing her husband on stage “comes natural” as she gushingly told The Times in a frivolous interview a few months before the 2013 General Election. If you say so, Mrs Muscat. 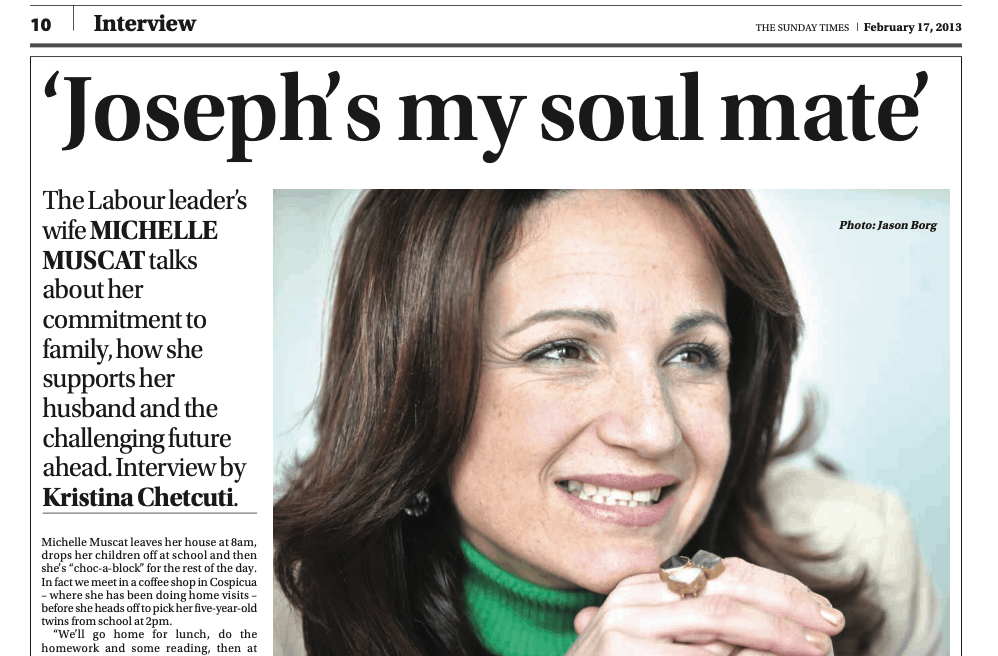 But why do you pick on poor Michelle Muscat, you might ask? After all she’s just, to use her favourite word, a “spouse” of a former prime minister, however disgraced he may be. It’s not her fault that our country has been grey-listed, miskina, I hear you say. Stop picking on her! Women should support other women, isn’t that the mantra? It depends on the woman in question. Michelle Muscat is not a political novice. She has been on the forefront of her husband’s brand from the very beginning. She says so herself in the interview I mentioned above: “We’re in it together”, she gushes. Aw, now we know where Chris Fearne got his Covid-19 slogan from. Sweet.

Yeah, you’re in it together, you say, Mrs Muscat. The question to ask is by how far?

Everything she says and does is stage managed to the hilt. So, it would not surprise anyone that last Wednesday’s Instagram post (with a bunch of hearts posted by one chriscardonamp underneath, yes really), is not a two-finger salute of sorts to all of us fretting and blaming the grey-listing on her husband’s criminal Muscatonomics.

Since Michelle Muscat brags that they’re in it together, why does she feign ignorance about her husband’s dodgy activities? Let’s say she really did not know what’s going on. Let’s give her the benefit of the doubt.

But I repeat. Did Mrs Muscat ever question where the money for multiple holidays, designer clothes, cosmetic surgery (and this not even counting the day-to-day household budget) ever come from since she ostensibly has no job and her husband’s bank account, that has been showing the same amount of €75,000 since 2014, never budged up or down?

In an interview she gave to a fawning Saviour Balzan on Xtra Sajf in July 2018, Michelle Muscat protested that people who know them are convinced that the Egrant claims are fabrications because they “live surrounded by friends” and “they know how we live. They know we live a very normal life.”

By then we had already learnt that the Muscats had a taste for pricey holidays, at least one costing €11,000, that was a fifth of Joseph Muscat’s income. This eyewatering amount only covered a week’s stay in a hotel, excluding flights and other costs.  The copy of the bill paid by Joseph Muscat was published by Daphne Caruana Galizia on her website.

So I ask you again, Mrs Muscat, didn’t you question the provenance of your husband’s money or in simple English: didn’t you ask your husband how he managed to pay for pricey stuff seeing that your twin girls also attend one of the most expensive private independent schools in the land? If you’re “not a diva” as you huffed and puffed to Balzan in that ridiculous interview, why, or rather, how do you manage to live a wannabe Kardashian lifestyle on such little income? After all, you did say in a 2017 Times interview that you manage the household budget yourself, so forgive my lèse majesté, but where does the money come from? Don’t you ask? Or do you already know?

What do you know and when did you know it, Mrs Muscat? May I remind you what you told Balzan in that interview: “Whatever Joseph does, I take my handbag, and follow him”? I can’t get that ditty from Sister Act out of my head. I will follow him/Follow him wherever he may go…

How far, though? To what ends?

You said that you have to live with ten years of lies about you. So why don’t you clear them up once and for all? May I remind you of your incredibly tone-deaf words you used when you spoke about the assassination of Daphne Caruana Galizia who had broken many stories about your baffling spending and notably, the story linking you to one of the offshore companies named in the Panama Papers: “When I heard the news about what happened to her, I think I was more sorry than her own family. Her family could go on to make her a saint; but at the time I said to myself: ‘Now I will have to live with her lies.” Wow. Just wow, eh. Shameless.

Were they lies, though? Yes, yes, we know that an inquiry whose terms of reference were drawn up by your own husband declared that no evidence was found to link Egrant to you… blah blah blah. But how do you explain your lifestyle? Do you just live by your wits? Impressive. Did you ever consider having your own influencer blog to give poor mortals like us hacks and tips on how to live a luxurious lifestyle on a budget, Michelle ma belle? You could call it ‘How to be flash without cash’. Nice.

Imagine all the endorsements from db, Dizz, James Caterers, Fortina, Tumas Group…Kerching! And why not? Marigold too. Bejnietna, did the pesky Commissioner for Voluntary Organisations Anthony Abela Medici ever check your accounts? Have they ever been audited? Ma tarax. Dak bestie, hux.

It’s coming up to three years since Saviour Balzan asked you whether you intend to file a libel lawsuit to clear your name over Egrant. You said then that you won’t be placing a limit on yourself because you need to study the facts in peace and then decide. How’s the studying going, then? Have you decided yet?

At the end of the day, Michelle Muscat’s Instagram account is a fiercely curated Muscatonomics in micro: it’s a pictogram on how to live beyond one’s apparent means, no questions asked. We all know what that economic philosophy wrought on Malta. No wonder then Mrs Muscat feels the need to let us know that the Muscat brand is untouched no matter what is going on in the country.

Because if her world goes tits up then it’s truly the end of the make-believe world she built with the 2019 Person of the Year for Corruption and Organized Crime.

Keeping up appearances can be exhausting. Just ask Mrs Bucket.

Previous:So these are the people who will save us
Next:Mintoff’s pupils