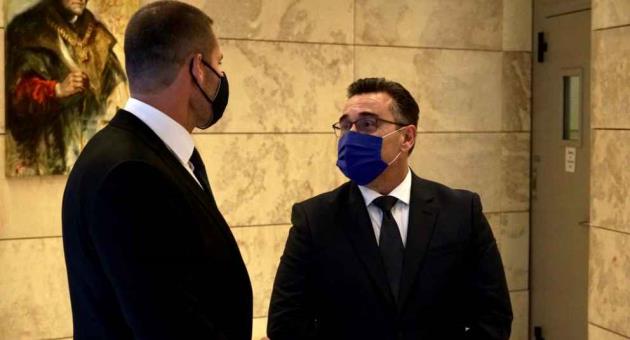 If this had been a normal country there would be a political crisis right now. Grey-listing by the FATF is not something that happened to us. This is not some misfortune like an oil price crisis or an oil tanker leak or an earthquake.

This is a catastrophic failure of policy by our political leaders. And in any normal democracy, parliaments would be debating urgent confidence motions and people would be demanding immediate general elections so that they could choose a government that would make a fresh start.

I have seen way too many pathetic Facebook posts from speakers for both sides of the political divide saying that today is not a day for pointing fingers. What? The only way that sentence is right is if you haven’t been pointing fingers for the last 7 years. And if that’s the case start by pointing fingers at yourself for failing to act to stop this disaster when you should have seen it coming. Because the rest of us did.

Although too many people refuse to acknowledge it, it is clear that the cause of yesterday’s decision was the corruption and the impunity since Joseph Muscat became prime minister. But that’s not going deep enough.

So, if you dislike the low-tax model on principle – and I have grown to sympathise with that view – what happened yesterday may have sounded its death knell to our tax structuring industry but the principle had nothing to do with it.

The grey-listing would have happened if this had been a higher-tax jurisdiction and still allowed Joseph Muscat’s cabal to get away with the crimes they continue to get away with. Zimbabwe is not a low-tax jurisdiction but it’s run, for want of a better verb, by kleptomaniacs. Zimbabwe is on the same list as we are now. And for the benefit of the racist trolls who have a problem with the fact that I lived there for some time, it was their beloved Labour Party that put them there, not the “tank ħara tal-Arriva” they love to mock so much.

Also, the consequences of grey-listing do not stop at harming our tax structuring activities. If you are not intending to cut yourself off from the rest of the world entirely (and not even North Korea manages that) you still need banks to pay, get paid, borrow, and lend in order to conduct business with the rest of the world. Your government still needs to borrow money from the world’s financial markets. Your energy supplier still needs to purchase energy or fuel from outside. At some point you’ll run out of your own cabbages.

Since ships from Tyre first landed here to trade, trust has been at the heart of the ability to complete a cross-border transaction. Laws and rules and currency structures and banks, they’re all vital. But none of that works without trust. And trust is what we have lost.

There is therefore a deeper cause that got us into this mess which we will need to acknowledge before we can try to fix it. Stopping at changing laws and increasing prosecutions just won’t cut it. And clearly, as we can all see for ourselves, it didn’t.

Robert Abela and his little band of elves are complaining the punishment was “unjust” because since January 2020, since he became prime minister, they’ve been “ticking all the boxes” (his words, would you believe) and doing all that’s been asked of them.

The fact is those changes were not asked of our government. Those changes were asked of our country. Our government lost the trust of the international community and there’s nothing they can do to regain it. Our country is being asked to show its commitment to belong to the rest of the world and the only real test of that is our willingness and ability not to hire corrupt ministers, not to keep in government Joseph Muscat’s attorney, not to protect a government minister accused by his alleged accomplices of a fucking literal fucking armed fucking robbery. Fuck.

All those trolls out there speak of the Nationalist Party as somehow disqualified from governing because of its “past”. You know, ‘arloġġ tal-lira’ and all that. Those trolls speak as if someone like me is not even entitled to have an opinion, because “Arriva”.

Whatever the errors of the ways of the Nationalist administrations that ended in 2013, when the PN was in government the international community respected this country. Against the judgement of several Member States, they agreed to allow Malta to join as an equal partner in the EU. They admitted Malta into the eurozone. When the Libya crisis hit they found Malta a worthy ally and a capable friend.

We earned the world’s trust by electing people who were decent. There were times when even the Nationalists risked squandering that fiduciary arrangement, none more dangerous than when the man we sent to serve as European Commissioner turned out to be what we had always known him to be: a crook. It was bad enough when John Dalli was forced to resign. It became a proper horror when Joseph Muscat fired the police chief so that John Dalli could return to safe harbour and guaranteed impunity.

Whatever he might say about it, do you think that there’s anything Robert Abela can do to persuade the international community to trust Joseph Muscat’s legal advisor and cabinet stooge in the worst days of the Panama imbroglio? Is the international community going to give time to our chief diplomat, Evarist Bartolo, who has been moaning about the laws of gods and the laws of animals for years but doing nothing about it because, as he told the world, he was principally worried for his own survival?

Forget about it. I understand that the PN right now wants to the country to perceive it as striving not to undermine the government’s effort to fix this problem.

But then, I don’t really understand it, do I? What? Go in a task force led by Robert Abela? Are you fucking kidding me?

Robert Abela and his band of cowards, robbers, idiots, and Silvio Schembri need to go, the lot of them. They need to be replaced by people who can do more than tick boxes in bad faith (Clyde Caruana’s talk of ‘good faith’ betrayed the fact that is what they are doing) to look like they’re changing things but leaving them as they are.

Robert Abela and his band need to be replaced by people who have not promised Joseph Muscat, and Keith Schembri, and Brian Tonna, and Paul Apap Bologna, and Konrad Mizzi, and Joe Gasan, and Chris Cardona, and Carmelo Abela, perpetual impunity come what may. And Yorgen Fenech, who remains without charges related to corruption which is only true because if you charge the briber you will need to charge the bribee.

Robert Abela and his people are never going to do that. And if and when they are re-elected come next election, we will have another 5 years guaranteed to be mistrusted by the rest of the world. Are we really that mad?

If this had been a normal country the Leader of Opposition wouldn’t be striking a magnanimous tone, reaching out with the hand of friendship, offering to participate in a joint task force with the criminals who did this to us.

If this had been a normal country the Leader of Opposition would be screaming from the top of his lungs demanding an immediate election.

The fact that he isn’t doing that is not, I submit, a poor reflection on his character or the product of misguided policies. I don’t blame him for it. Like him, I see the polls and I see that if an election were to be held now, no matter the catastrophic extent of yesterday’s disaster, Labour would win it comfortably and resoundingly.

But that’s just the problem, isn’t it? It’s not the Opposition that is not normal. It’s the electorate that rewards the corruption, the incompetence, and this world-scale loss of face, with ‘prosit Ministru’, u ‘għada xorta jisbaħ taħt il-Lejber’.

You know, the thing is, if we think like that, why do we expect the world to trust us?

Previous:Greyed Malta: (6) Let’s give credit where credit is due
Next:GUEST POST: Malta, Uganda, Yemen and Zimbabwe