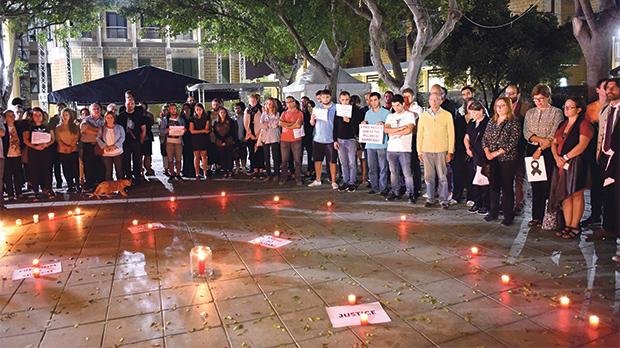 With a number of other journalists, I was invited by the MEPs from the LIBE committee who were here earlier this week to tell them what I thought about the progress Malta was making in aligning itself with democratic norms, particularly the rule of law.

Their final question to us was what we thought they (or perhaps the EU in a more general sense) could do to help. How can Europe help nudge Malta out of its lethargic attitude to democratic reform? Or how can they incentivise reform with things the public might perceive as appropriate reward?

This question is being asked more forcefully in Hungary’s case where the EU is getting ready to use its new legal options to withhold financial benefits of EU membership from EU states that do not respect the rule of law. Should the EU be thinking in this way about Malta?

The MEPs weren’t making threats. The question was asked more in the sense of finding additional benefits in exchange for reforms rather than penalties levied for failing to introduce reforms.

Some of my colleagues were worried there could be a backlash on the European idea altogether if the EU is perceived to be using its financial means to impose terms on Malta. I can see where they’re coming from, though I’m a firm believer in the idea that you’re always better off doing the right thing rather than continue to subsidise deteriorating democracies for fear they become less democratic.

There’s a short answer to the Europeans and all the other international agencies: keep the spotlight on Malta, keep up the pressure on the Maltese authorities, keep doing your bit even though surely you must be looking forward to a time when you can tell yourself that the pressure you applied on Malta has worked and things now are looking up.

And then I thought there’s a further point to this. For the changes to truly happen, and for the changes to truly matter, outside help can only really take us so far. We need to own this thing. It’s easy to criticise the authorities for being lethargic and half-hearted about reform but the reality is the problem here is we have a population that is utterly indifferent to the manner in which it is governed.

Consider the article by former Chief Justice, former Ombudsman Joe Said Pullicino reported today on Times of Malta. He was addressing law students despairing that they don’t care how this country is governed, or rather misgoverned. They don’t care or they’re too scared to speak up which I can’t decide whether it is worse or better.

Joe Said Pullicino’s article certainly amounts to a rebuke but I’m not entirely certain of the predictable adjective ‘stinging’. I don’t see anyone being stung.  As Justice Said Pullicino himself acknowledged not even a journalist blown up because she was investigating corruption shook almost any of them out of their slumber. Why would the admonishment of an octogenarian who’s very much alive?

I don’t presume to be in the heads of those law students, at least the ones who are by now aware of the article. I don’t know if they feel when they read it they should have done more or should as of now be doing more for their country and its ungrateful, indifferent people.

I don’t presume to be in the head of Joe Said Pullicino either. But I cannot help but wonder how it must feel to him to hear Prime Minister Robert Abela and his former Justice Ministers Edward Zammit Lewis and Owen Bonnici describe their aimless tinkering as “unprecedented reforms” or that they “respect the rule of law” like no one ever before them.

That’s not just because Joe Said Pullicino has the professional competence and the legal and administrative experience to evaluate the so-called reforms and see them for the worthless faecal matter they amount to. It’s not just because he knows more than enough about the law to see for himself that ‘rule of law’ means rather a lot more than the government seems to intend by it.

I wonder what he must feel about it because of the feelings he described sitting on the public inquiry in the Daphne Caruana Galizia case. Many of us have read snippets of reports of testimonies given at the inquiry. A few of us were in the chamber when hearings were being held in open court of the more spectacular witnesses like Joseph Muscat and Keith Schembri and Konrad Mizzi.

Joe Said Pullicino was one of three to listen to all of it almost silently, restraining himself not to pronounce summary justice by succumbing to the urge of throwing his chair at corrupt, lazy, arrogant, criminal in-all-but-a-formal-conviction ‘witnesses’ that appeared before them. He didn’t even have the relative luxury of the family’s lawyers of occasionally breaching protocol and passing some snide remark just to get it off his overburdened chest.

He had to keep the dignity of decorum as in front of his very eyes his country, its laws, its government, and most painfully its people, were being indicted for pathological indifference at best, violent, wilful violence at worst. He sat through the horror of the evidence that led him and his colleagues on that inquiry to draw the only possible conclusion, the one Carlo Bonini had drawn up artistically and journalistically just six months after Daphne was killed when he titled his first book on the subject “l’isola assassina” … this was, this is a murderous island.

In this article reported this morning, Joe Said Pullicino described the experience of witnessing the horror of the truth as a trauma for him, he who has spent six decades wrestling injustice as a lawyer, a judge, a regulator, and an ombudsman. Even after all he had seen he was not jaded enough to be prepared for the truth that Daphne’s killing had revealed.

As I read that this morning I was reminded of a speech Daphne’s husband Peter had given in Strasbourg about a month after his wife was killed. He spoke of his wife’s experience of finding what lay beneath the surface of Malta’s superficial beauty and normality. As she scratched that surface she was horrified with the rot she found that confirmed her suspicions but never failed to shock and surprise her. She could never look away. She could never stop digging into this reality our country had proven so good at papering over.

We’re still papering over it. Like Daphne Caruana Galizia before him, Joe Said Pullicino finds himself screeching at a crowd of the indifferent. He’s like that guy on the highway warning everyone that the body snatchers have invaded and they laugh at him a little, and they pity him a little, and they ignore him. More than a little.

What could outsiders possibly ever do to help us when we all would much rather not even help ourselves?