This is how Labour justify themselves. They throw contradictions in the mix, confusing issues and throwing people into forced reserved neutrality.

I saw them do it to a smart man a few weeks ago. Owen Bonnici tried to drown Antonio di Pietro in a sea of dubious facts, half-truths and lies which the man had to swim through to make sense of what he was being told. But a smart man like di Pietro has dealt with this sort of thing before. And by the next day he realised Konrad Mizzi’s simple defence was that the boxes he hid in Panama were empty now. And Antonio di Pietro laughed at that.

Konrad Mizzi is still saying no one can ever find him guilty of anything because, to use his babble, his assets were not populated yet.

The fact that he’s still there repeating this; the fact we have to continue to hear him; legitimises him. Totò Riina kept saying he was innocent behind those metal bars until he died. But he was behind bars. Konrad Mizzi is in public office. 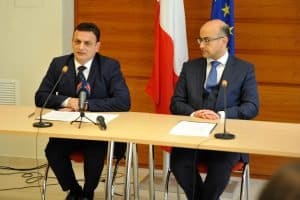 And the state supports him and protects him instead of prosecuting him. The investigators who found out what he was doing were fired and threatened with prison if they spoke of what they knew. The MEP who took the information to court today has been branded a traitor and threatened with the same prison term.

And to isolate those seeking justice, a Labour Party propagandist with a press card today announced a PN politician is under FIAU investigation. Now that will be an investigation the FIAU will enthusiastically conduct. And they will not worry about the risk of prison as they manage the leaking of its content. The laws of the land only apply when in the service of the Labour Party.

Life in resistance of the state’s power is becoming tougher to laugh off. Opposition MPs and anyone suspected of supporting them are habitually inspected and inspected and inspected again: not just in the hope of finding something wrong in their affairs but rather as an act of state harassment to bully them into compliance.

Government officials in the service of the Labour Party let you know they are accessing data which should not be in their possession in order to silence you, hanging over your head the threat of fabricated stories spun from a starting factoid that can be made to look like one of the misdeeds of their own.

They no longer say Konrad Mizzi is clean. They now just say everyone else is almost as dirty. In order to divert attention on the structures and payments documentary evidence shows Konrad Mizzi does have, his allies insinuate ‘everyone does it’.

This is how they manage situations. They vomit all over them. 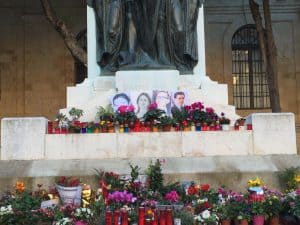 That picture of Dom Mintoff next to Daphne Caruana Galizia was a symptom of just that attitude. They don’t want people to talk about the scandals Daphne revealed. They want to discuss what she’d make of a picture of Mintoff next to hers.

It’s simple. Konrad Mizzi should not be a government minister. He should be sitting in a dank room at Police HQ answering questions, followed by a trip in front of judge to ask for bail. 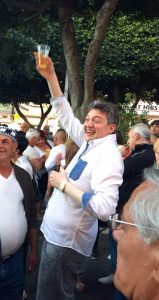 His boss can’t afford that. Konrad Mizzi babbles. When he feels the heat, he smiles like he doesn’t mean it. And that makes a lot of people nervous.

They will want to avoid having Konrad Mizzi in a closed room beyond their reach as if, quite literally, they were fighting for their lives.

Previous:The picture they should have put there
Next:Mintoff’s picture