This government is an embarrassment. David Casa published the response the government sent to the European Parliament for its damning rule of law report. The general sense of the reply was ‘you’re idiots, we’re fine, there’s nothing we can learn about rule of law, bugger off’. If you want the details a link to the report is at the bottom of this post.

But I will draw your attention to how the report wanted to ‘prove’ the Attorney General had no problem acting fearlessly as prosecutor of people that belong to the party led by the bosses who as government ministers are his clients.

They go back to June 2013 when the Labour government was still at its infancy and the Attorney General was still in his old habits. Here let me quote from the report: “In June 2013, the Attorney General appealed a not guilty judgement of the Court of Magistrates dated 31 May 2013 (Police vs X case number 850/11) in respect of allegations against a strong Labour candidate for the 2014 European Parliament. The appeal was upheld and the accused was found to be guilty by a judgement of the Court of Criminal Appeal made on 8 May 2014. The individual subsequently withdrew his candidature”. 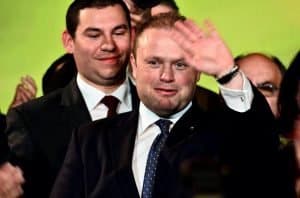 Oh bloody hell! Look at these guys. You all remember who “X” is, don’t you? Cyrus Engerer! The author of this report should have not minded naming him. After all Europarliamentarians know him. He’s a regular on their scene lobbying for Malta.

In the process of trying, poorly, to prove that the Attorney General feels free to act (well he may have two months into your government but you sure put him in his place since then, haven’t you?) they also prove that this is a government of crooks, where criminals – even, exceptionally the ones convicted by court decisions – control and run the highest offices of the land.

Cyrus Engerer is no reformed ex-con. His withdrawal from the electoral candidacy was rewarded with bear hugs by Joseph Muscat, with the honorific of soldier of steel and with an appointment to one of the most senior diplomatic positions in the entire bureaucracy.

A clown, a pornographer, a criminal and a senior government official all rolled into one.

It is reasonable to expect that if he did not write it, Cyrus Engerer had a say in this report and presumably in presenting himself as evidence of correct public administration when he’s precisely the opposite.

It hurts to facepalm.