Do yourselves a favour and watch Jacob Borg chase Keith Schembri all the way from Court to Castille. The first thing I observe is the journalist’s fitness. I’d have been as breathless as Kurt Farrugia making that climb but since I have rather a lot more to carry than Jacob Borg’s back-pack this assignment explains why I’m not a field journalist.

But as Jacob Borg says in his placid as an Indian cow calm, this is no laughing matter.

These few minutes on camera are representative of the state of our democracy.

The press asks the second most powerful man in the country a simple question: who owns a company you first denied and later admitted lining up to do business with while you were in office?

He did not answer. And the question was put to him repeatedly and persistently.

Then Kurt Farrugia buts in and shows he too is confused by all the frustrating, conflicting and, as they hope, quite likely futile lines of inquiry that are outstanding. I don’t think he was trying to mislead Jacob Borg about whether an inquiry into 17 Black was actually ongoing or not. I really do think that was a genuine mistake of Kurt Farrugia who spends most of his time trying not to think of the crap his bosses make him swim in.

He was really confused there and got his facts up side down. He must have spent the whole afternoon kicking himself for that.

But the real peak of this film is the moment when Keith Schembri lets anger take the better of him and throws in what he must have thought was a smart line that would shut up Jacob Borg: “Maybe I used (the $1 million expected from the Panama company) to pay your wages, like I did over the past three years.” 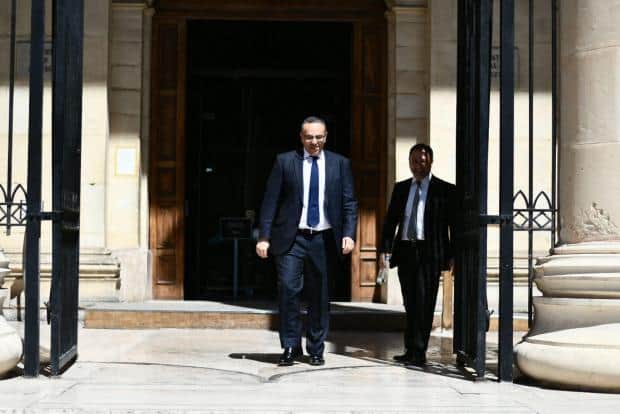 The horror of that remark is remarkable even by the Dario Argento standards of the political environment we live in.

Like Michael Corleone in a conversation with a Nevada Senator, Keith Schembri feels he has spent enough money bribing the former management of Times of Malta to ensure journalists working there do not ask him uncomfortable questions.

In a statement, Allied Newspapers categorically denied Mr Schembri’s comments. “Kasco is simply one of the many suppliers to Allied’s sister company, Progress Press,” the company said.

Well that’s a moot point now. Keith Schembri was found by the Panama Papers to have been slushing Times of Malta’s Managing Director of many years. True the trustees made sure he leaves the business but the reputation of our newspaper of record suffered great harm. And with it, sadly, the reputation of intrepid, hard-working, objective and capable journalists and editors who have done nothing to earn their newspaper the reputational harm it suffered.

But when we think of corruption we rightly first think of the corrupted and we don’t think long enough about the corrupters: the people who put the money in the metaphorical brown envelopes and solicit undue favour.

Keith Schembri goes on camera today and does it in front of the entire country. He puts money in a metaphorical brown envelope and hands it over to Jacob Borg reminding him that he owes him his silence and fawning loyalty in exchange for his salary of the last three years.

Although journalists are institutions of our democracy they are not officials of the state as the laws on bribery understand them. On that tape Keith Schembri may not have committed an offence in the criminal sense, but he certainly has committed a political crime.

He has threatened a journalist holding him to account as a senior official of government suspected of wrongdoing, with personal consequences: his salary. ‘For the last 3 years your salary depended on my generosity. Keep chasing me up Melita Street and that might change’. The single quotes are there because I’m paraphrasing.

Watch the video and judge for yourself.

It’s not coffee we want. It’s answers. Or get the hell out of there and let someone else make the coffee.

Note added June 6th, 2018. 10:21. An earlier version of this post said “Keith Schembri feels he has spent enough money bribing the management and trustees of Times of Malta to ensure journalists working there do not ask him uncomfortable questions.” The words ‘and trustees’ have since been deleted. The reference to trustees was erroneous as no such allegation has ever materialised. The error is regretted.

Previous:Daphne Caruana Galizia among journalists in rededication of Washington Journalists Memorial
Next:Cursed by the masses