Following is the full, unedited text of Mr Steven Mallia’s recent press statement. Needless to say, my response will be filed in court at the appropriate juncture. 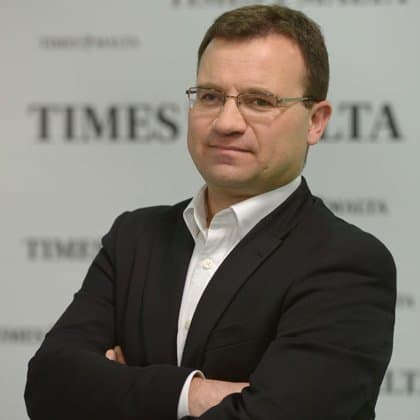 I was actively involved in journalism for over two decades. Throughout that time I enjoyed moments of great satisfaction and made my fair share of mistakes. But whatever faults I may have possessed, I always operated in an environment of fierce independence and acted with unfailing integrity. People may at times have disagreed with my views or actions, but my integrity was one trait that political leaders I came into contact with never called into question.

I chose to write an article for the Sunday Times of Malta (October 21, 2018) – a newspaper I am proud and privileged to have edited for nine years – because I wanted to express my genuine concern at the direction a certain type of journalism has taken in Malta particularly by people who have been in the political field. While investigative reporting is vital, one of the main points I wished to convey is that certain standards are non-negotiable: opinion should never be passed off as fact and freedom of expression is not an absolute right – it comes with responsibilities. “No one,” I wrote, “should ever be free to fabricate or distort facts”.

Whatever the merits of my arguments – and people have always been welcome to oppose them – what I put forward was my point of view.

It is deeply saddening and profoundly ironic that barely 24 hours after this piece appeared, I was subjected to the most hideous character assassination by Manuel Delia – who made a series of totally unfounded allegations in my regard in a blog post, shared on social media, titled ‘Journalism most foul, he said’.

Contrary to his malicious allegations, in my position as editor I never possessed any knowledge of the alleged actions attributed to the ex-managing director of Allied Newspapers Ltd, Adrian Hillman; and, particularly since I had absolutely no involvement in the commercial operations of the company, I was not in a position to know – let alone gain any financial benefit myself from them, which is perhaps the most repulsive fiction put forward by Manuel Delia.

Furthermore – as my former colleagues will attest because they lived the reality – the ex-managing director never, ever dictated an editorial decision during my tenure. I took those decisions and assume sole responsibility for them. Along with his other allegations, this is a grotesque invention by Manuel Delia that will not remain unchallenged.

I developed a fairly thick skin in my career as a journalist, and never took legal action against anybody over what was said or written about me or the newspaper – even when I deemed it offensive. On the contrary, I campaigned hard for the removal of criminal libel from the statute books and contributed proposals to the updated Media and Defamation Act that today provides journalists in Malta with better legal protection than ever before.

Following Manuel Delia’s blog post last Monday, I posted a brief reply on his Facebook wall stating that the unsubstantiated allegations and insinuations made in my regard were lies and that journalists/bloggers are responsible for the content they publish. During the course of the week, which allowed for a period of reflection, he did not retract a word, let alone apologise. On the contrary, he – and other uninformed commenters – increased the dose.

Given the absence of a retraction and apology, I have been left with no alternative than to instruct my lawyers to file defamation proceedings in court against Manuel Delia. This will take place in the coming week.

Neither he, nor anyone else for that matter, has the right to unjustly tarnish another’s reputation and I will leave no stone unturned to safeguard mine. Nor will I cower to bullying tactics aimed at discouraging me from expressing an opinion.