Thank you for ensuring we are not alone 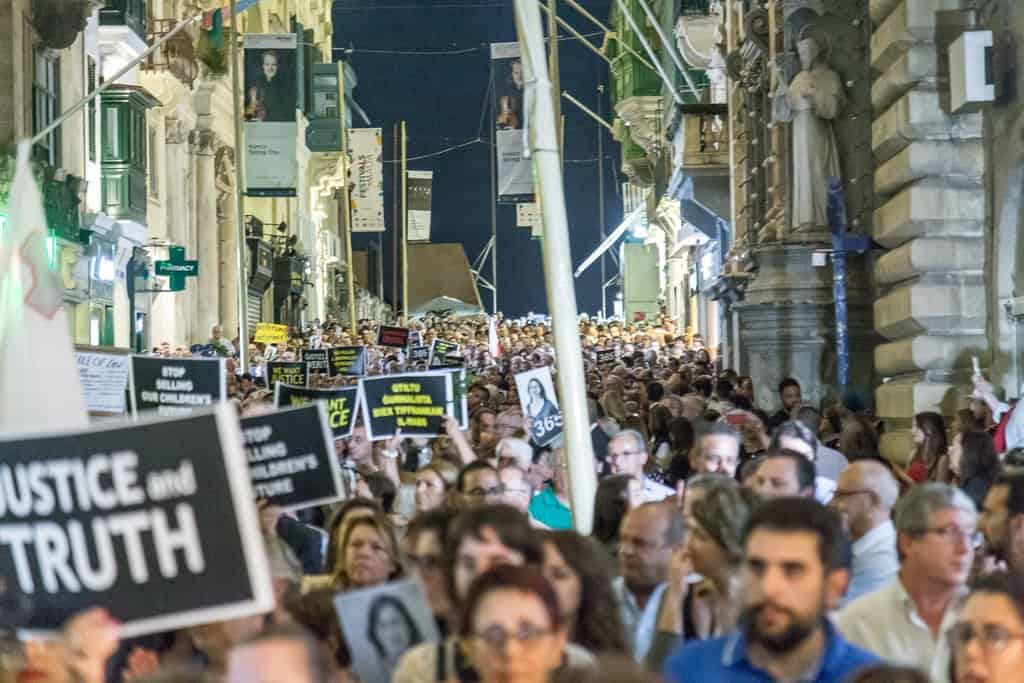 Labour wants the world’s press to stop being interested in Malta unless it is to sing the praises of Joseph Muscat, but the presence of international NGOs, MEPs and journalists during the past week is important for us.

I’ll explain this in simple terms for the trolls and the tyrants to have no difficulty understanding. What happened to Daphne Caruana Galizia must not happen again. The intimidation she suffered is raising its head many times over, directed at her family and at other journalists and activists and opposition politicians. The police have learnt nothing from the lesson of a journalist killed under their watch. They provide no discernible protection to other journalists and seem just as resigned to see another journalist killed as they expect another brawl in Paceville.

But the rest of the world has learnt the lesson that in Malta, in Europe, journalists can be isolated to the point that their assassination is possible.

That’s why all those people were here.

I did not meet everyone these past weeks but I answered every call I got because while the oppressors know the rest of the world is watching we are all a little bit safer. I feel it is my duty to answer questions to the best of my ability. I owe it to my country to be honest and not to gloss over things. One day even people here will realise that the scandal is in the crimes being committed not in the act of revealing them.

I thank the Italian journalistic community that has stepped up and extended their support and solidarity to Maltese activists and journalists as if we were their own. The declaration led by Maria Grazia Mazzola of TG1 and signed by 57 other Italian journalists who covered the story and made important public pronouncements was a challenge to the government that has clearly no intention of going away.

RAI itself covered Malta in 10 special programs over this week, not to mention crews here in Malta for TG1, but also Carlo Lo Savio for TG2, Piere Damiani D’Agata for TG3, Roberta Marilli for Mediterraneo RAI and Ilario Piagnerelli for Rai24.

Carlo Bonini’s coverage for La Repubblica as part of the Daphne Project is crucial to the discovery of what really happened to Daphne Caruana Galizia, how her assassination happened and bringing us closer than anyone to the truth about the murder. He has covered this story for a year, published a book about it and shows no sign of letting go.

These Italian colleagues gave us the opportunity to speak to other journalists accredited in Rome and thanks go to Maarten van Aalderen of the Netherland’s De Telegraaf, and journalists from Radio Svizzera Italiana, ARD Das Erste and several other publications accredited to Rome. Sabrina Provenzani continued her important coverage for Il Fatto Quotidiano.

Italian NGOs Libera Informazione and Antimafia Duemila are also ensuring there is extensive coverage and the support of journalists working in the fight against corruption and organised crime.

Deutsche Welle continued their reporting of the happenings here and Iris Rohmann drove and continues to drive a campaign of journalism, art and social activism combined.

This week covering the situation in Malta there was the chief international correspondent of US network NBC, Richard Engel. From Japan’s national TV station there was Shoko Koyama.

We had with us civil society’s guest from the BBC John Sweeney who continues to take a deep interest in the situation here and has lectured at a public event and to Maltese journalism students at the University. The BBC covered Malta in Simon Reeve’s series on the Mediterranean.

Sonia Logre was here from Agence France Presse as well as Stephen Grey for Reuters. They ensured the entire world read about what was going on.

Delegations from PEN International, the Committee to Protect Journalists, the European Centre for Press and Media Freedom, the International Press Institute and the European Federation of Journalists were here. They spoke out, openly and clearly, addressing the prime minister, the local press community and international news organisations about the state of affairs in Malta.

And hosted by MEP David Casa, there were MEPs Ana Gomes from the socialist party, Monica Macovei from the conservatives and Stelios Kouloglou from the hard left, incidentally a journalist himself.

The rest of the world’s press freedom community carried the message and made sure that the campaign for truth and justice that is fought here has the world’s attention. What happens here is important and for as long as the world watches the assassins of Daphne Caruana Galizia — not just the ones in a cell today but the ones walking around as if nothing happened — cannot strike again.

For this my sincere thanks.

One TV, in the beginning of this month, said I would lead a campaign against Malta. I led nothing. These journalists, NGOs, MEPs came here because they feel the horror of a country that used to be a democracy but has killed one of its own journalists and let the politicians and the criminals she investigated do as they please. And they feel the fear that since nothing changed this year, this can happen again any time.

If I, or frankly anyone, had the means and the ability to mobilise such interest in a story which, as Labour would have you believe, is untrue, even the witchcraft they attributed to Daphne would not be enough. Most Bond villains would not manage this.

Still, I admit to being a little flattered that One TV thinks that the notion that I could have this ability is something their viewers might believe. Perhaps they should tell them that we have every intention of ensuring we stay safe, even as we continue to work to reveal the truth about the cabal that has stolen our country.