We have worn the sobriquet Mafia State uncomfortably for some time now. One intuitively recognisable characteristic of communities that embrace the values of Mafiosi is their inability to recognise themselves for what they are.

To the point where the rituals of a society that institutionalises its hypocrisies and ritualises its inherent stupidities become a badge of pride.

There is nothing religious about a priest “taking possession” of “his” parish. This is not an act of faith. It is a residue of pre-modern notions of community life and there’s nothing wrong in that.

But the effort to be creative and innovative in what is ultimately a hangover of the dark ages can be absolutely ridiculous. 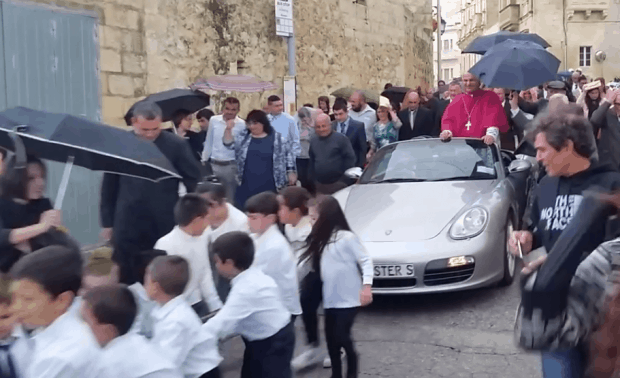 The sight of the new parish-priest of the micro-hamlet of Żebbuġ pharaonically dragged into the village by children pulling a convertible sports car was painful to behold. If we had the skills to put together a Little Britain and call it Little Malta and run the skit of a parish priest dressed as a cardinal in one of the smallest parishes in the entire universal church progressing down one of the only two streets of his village like Rameses on wheels would be too ridiculous to make the cut.

It is exquisite how pompous priests find multiple uses for children. When dressed in their Sunday best they can happily serve as beasts of burden. Let the little children come to me, and do not hinder them, for the kingdom of heaven belongs to such as these … that they may pull on a rope attached to a sports car in which I stand in the glory of my Father.

But what is most revolting about all this, what is most mafioso, is not the act in and of itself but the inability of the participants of this antediluvian farce to actually see why this is so wrong.

They got on the phone to commentators and critics to tell them why the rest of us are wrong to think this is just out of order and our laughter and our perplexity are the product of prejudice and that most awful sin of all, ‘sensationalism’.

Where do these priests get their training from? From Pope Francis who rolls around in a Ford Focus and sleeps in a bedroom of a pilgrim’s hostel?

You will have seen the video of the Porsche and the human plough horses.

Maybe you haven’t seen this yet. This public act of pretend humility. The new parish priest gets on his knees and “kisses the dust of Żebbuġ”. And now what? What does that gesture even mean? Pope John Paul II used to kiss the ground on arrival to countries he visited. That was a gesture of humility from a man revered as a saint and occupying one of the most influential and powerful positions in the globe, stepping down from that authority humbly on his knees.

But when the parish-priest of Little Nowhere gets on his knees he is living in the delusion that he’s climbing down from somewhere. And those who applaud him for this gesture of self-abnegation can now see how stand again, 9 feet tall, a giant in a village of dwarfs.

You can hear the Godfather love theme play on the piping church organ.

Previous:EP tax evasion committee calls on passport sales to be abolished
Next:I don’t think that means what you think it means