Megan and Amy Mallia: Seeing beyond our shores

This is the text of the speech read out yesterday by Daphne Caruana Galizia’s nieces: 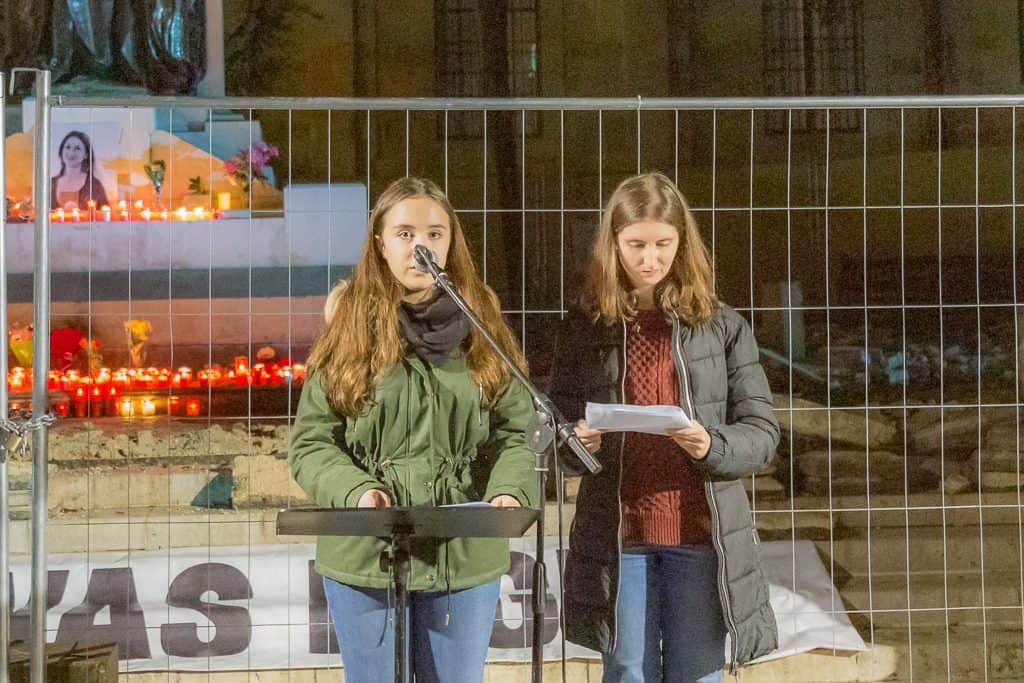 Many question the value of honours and awards for our aunt Daphne when she has already been killed for her work, when those who ordered her assassination are still at large, and when the conditions that enabled her murder remain as desperate as ever.

But as her nieces, we think differently, as does the rest of our family.

Killing Daphne was only one first step in making her disappear.

They try killing her legacy by distorting her work now that she can no longer defend it.  They try to turn the public against her, calling her a “hate blogger”, a traitor, a witch. They continually intimidate and harass those calling for justice for her and for her stories, even now.

All of these things are yet another step in their attempt to make her legacy disappear.  A legacy which is a gift to society, and which has inspired many, including all of you here.

The Maltese government has done its utmost to tarnish and eradicate both the memory and the legacy of our brave aunt, after years of her being harassed.  Denigrated.  Dehumanised. Vilified.

But the government does not see beyond the shores of this tiny rock.

In the thirteen months that have passed since her assassination, Daphne has received several honours and awards worldwide – awards and honours which are important in helping to keep both her legacy and her memory alive.

These are the ones Daphne has received so far:

The European Parliament in Brussels announced that a

was to be awarded annually

“Person of the year” by La Repubblica newspaper, Italy

Premio Mario Francese 2018, by the Sicilian Order of Journalists, Palermo

A wooden sculpture commemorating Daphne’s life and work was unveiled at the European Parliament in Strasbourg on International Press Freedom Day.

It is now on permanent display in the press room there.

“Difference Day Honorary Title 2018” awarded to Daphne and her family by the Brussels University Alliance, Belgium

“Conscience in Media Award”, by the American Society of Journalists and Authors, New York. (Daphne was just the 13th recipient since 1975.)

Contribution to Society Award, by Euronews and the European Business Society at the inaugural European Leadership Awards ceremony, Brussels

Inaugural award for “Journalists, Whistleblowers and Defenders of the Right to Information” presented by the GUE / NGL European parliamentary group in Daphne’s honour

Award for the Protection of Journalists presented to Daphne’s family by the Press Emblem Campaign, Geneva, in her honour

Inclusion in the Journalists’ Memorial during the rededication ceremony at the Newseum, Washington

Inclusion in the Reporters’ Memorial in Bayeux, Normandy, by Reporters Without Borders

The lights at the Eiffel Tower in Paris were switched off for one minute in honour of Daphne and other journalists on the initiative of Reporters Without Borders, to mark the United Nations International Day To End Impunity For Crimes Against Journalists

Medal of Honour of the City of Strasbourg, France

In a way, these honours and awards are yours too – for helping to keep Daphne’s memory alive by your commitment in the fight for justice, and for recognising our aunt’s work as a contribution to all of us, and her assassination as a crime against us all.

But no matter what honours and awards Daphne receives, what she deserves most of all – and what we want for her – is justice.