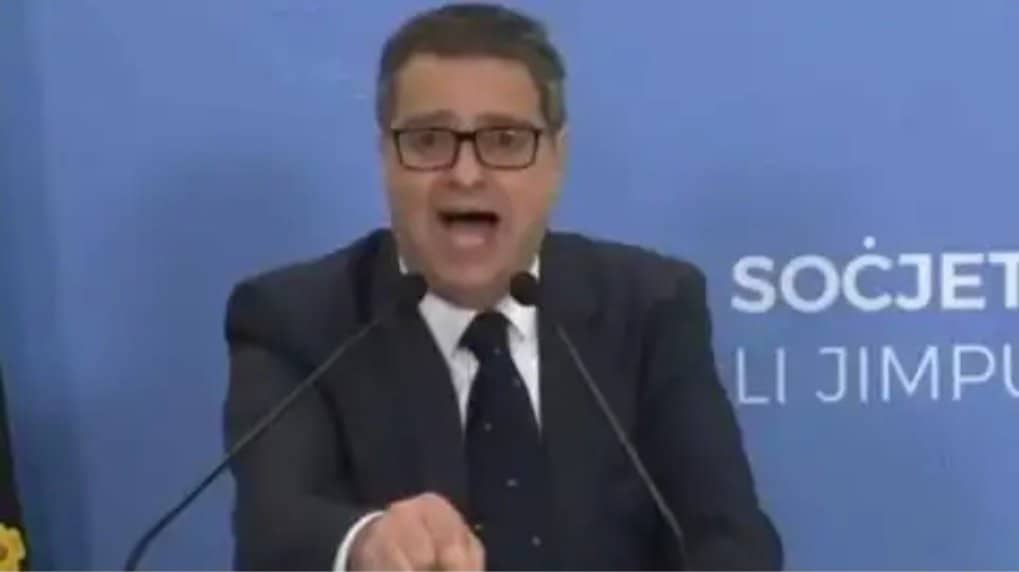 We have entered a new phase in political reality. The ranking order of parties remains unchanged and the majority support for the Labour Party remains unassailable. But the major change is that as time goes by party leaders lose more control over their fate and their improvisations and errors cost them more and more.

Hardly anyone doubts Konrad Mizzi and Keith Schembri are corrupt and hardly anyone still wonders why Joseph Muscat keeps them there. That heat is mute within the ranks of the Labour Party. Like Soviet regimes of the last century, dissent is never publicly expressed. The applause at party conferences is unanimous and harmonised. The sycophancy at every turn rehearsed and well delivered.

But Joseph Muscat perceives the heat in his neck of the woods better than any of us could. The overt message he gets is ‘why are you letting these two spoil the grand reputation of the fantastic achievements of the Labour Party?’ The underlying, unspoken question is ‘if you’re involved you need to find a better way of covering this up’.

It is to divert their attention that Joseph Muscat has had to resort to cards he would rather have played at a time when they would have been more useful.

The story in yesterday’s The Sunday Times about an ongoing police investigation into Adrian Delia’s shady past would have been far more useful to Labour near the general election. By then, any potential Adrian Delia might have of winning an election, unlikely as that prospect sounds, would have been completely undercut by any police action.

Why did Labour go premature with this story? After all, apart from the fact that the police have noticed what we all read in Daphne Caruana Galizia’s blog over a year ago, no new fact emerged from the report in yesterday’s paper.

Because Labour started to perceive that the PN’s leadership was coming round to the idea that at least part of its job was to oppose its record of corruption and maladministration.

The so-called strategy of a ‘positive’ opposition and the focus on ‘bread and butter issues’ were clearly not working. Not that bread and butter issues are unimportant. Far from it. But the PN was only able to vaguely mouth some rhetoric about ‘too much immigration’ presenting graph upon graph proving what we can all see: more people live here. But otherwise not providing much in terms of policy, ignored largely by the indifferent and attracting the attention of those invested in a migrant population like employers and landlords.

Of course, the rabid racists who wanted to read in the PN’s rhetoric what the PN wanted them to read applauded the newfound hostility to foreigners. That does not mean they would have changed their vote to support PN over the matter.

Certainly, nothing in the regular polling, published and unpublished, suggested the PN was gaining ground.

Over the last 6 weeks or so the PN changed course. It expected that the small minority of people who almost certainly voted PN in 2017 but were criticising the PN because of its cool distance from issues of corruption and governance would enthusiastically welcome the PN’s tactical shift. This is not the first time that the PN leadership has shown itself entirely incapable of understanding a huge chunk of the electorate that consistently voted for it in the past.

The PN’s tactical shift was not accompanied by the bright light and the heavenly commanding voice that is required for a respectable Damascene experience. The PN’s distance from the issues of corruption during the first year of Adrian Delia’s tenure was reprehensible but understandable. If the PN continued to lend credibility to the issues investigated by Daphne Caruana Galizia, Adrian Delia would effectively disqualify himself from public office.

Any opportunity to discredit Daphne Caruana Galizia’s journalism was enthusiastically grasped. The high point of that approach was the infamous tear-jerking Egrant press conference by the Prime Minister in the early summer and the fallout from it within the PN.

As much as Labour was disappointed the Egrant inquiry conclusions did not kill the story of corruption and the widespread call for action on it, the PN was disappointed as well. It too could not wait for all this to be over.

At some point, they realised it was and started to make overtures to the people who in their mind are “the Daphne crowd”. You know, like Beatlemaniacs or Juventus fans.

Labour does not like this new Adrian Delia. It does not like the idea that the Opposition it faces finds common ground to resist it. It does not like unanimity in calls for accountability. And above all, it does not like any potential losses it may have to suffer being transformed into gains for the PN. So far it has completely managed to avoid that. Joseph Muscat would absolutely not want that to change.

That’s why yesterday’s story on The Sunday Times informing everyone that Adrian Delia was the subject of a criminal investigation into money laundering was necessary, premature as it was.

It’s an act of manipulation because Labour needs division in the Opposition as much as it needs air and water and it cannot risk an Opposition coalescing around resistance against it.

Now of course if the PN leadership consistently fails to understand those who voted for it in 2017 and have for the past year and more distanced themselves from it, Labour understands them even less.

It really believes its own One TV interpretation that the PN is this beehive that thinks as one and is only momentarily confused because the queen bee has drunk too much mead.

The PN has never been a beehive. Whenever it won any vote it did so because a coalition of people of different political cultures, aspirations and even ideological frame of mind negotiated a balanced view none of them was entirely happy with but all preferred it to anything Labour represented.

That coalition is entirely fractured because the vulnerabilities Joseph Muscat is exploiting by pushing the story of criminal investigations into Adrian Delia’s past affairs were not for a moment too far from the mind of the PN-voters who do not recognise the party they used to vote for, for anything they would want to relate with, let alone support.

The fact that Adrian Delia tried to change the direction the last few weeks impressed nobody. He waddled like the slurring guy at prom night who promises to be nice assuming his irresistible charms would make you forget he groped you when he was completely sloshed last week.

“The Daphne crowd”, as they call it, is entirely familiar with the sensation of having stories Daphne Caruana Galizia worked on eventually, in spite of all resistance, denials, slander and hyperbolic drama, being confirmed by evidence on top of what she herself had published.

They do not need the help of Labour’s spin to stay away from the PN.

They don’t appreciate Labour’s manipulation. And they appreciate even less that whether in respect of Konrad Mizzi and Keith Schembri or of Adrian Delia, the institutions of law enforcement and justice are within his control and he turns them on and off as and when it is convenient for him to do so. After all there is no telling what might prove most convenient for Joseph Muscat, a conviction, a never-ending investigation, or even an asbolution.

This is what Silvio Camilleri, on the Chief Justice’s bench, described as the rule of delinquents. It is when the law is applied discriminately punishing those that are inconvenient to the executive and ignoring those that support it.

Like a mid-ranking schoolyard bully, Adrian Delia and his team do not lash out at the bigger guy. Instead, they bash those around them too small to be of any real threat.

Consider the great drama of the relocated wreath on Daphne’s protest site in Valletta which Adrian Delia spent an entire year walking by and completely ignoring. And every day since he visited in mid-October, mind you.

And now consider the childish knocking out of Godfrey Farrugia’s motion calling on Konrad Mizzi to resign with a motion by the PN calling for an inquiry into the killing of Daphne Caruana Galizia.

The subject of the replacement motion is one of those overtures, as the slimy remark on Saviour Balzan’s show by Adrian Delia that activists in Occupy Justice were “his friends”.

That sort of initiative is not received with gratitude. Adrian Delia could have presented that motion every day for the past 13 months. If he could not bring himself to support a motion by Godfrey Farrugia that he should otherwise agree with because it was filed by Godfrey Farrugia, why should he expect anyone to support his motion calling on justice for Daphne Caruana Galizia in spite of the fact that he filed it?

For a year, the PN leadership’s trolls charged to criticise Adrian Delia’s critics because they were keeping the PN divided by not shutting up about corruption and money laundering and other ‘negative’ issues. Now they are charging with the complaint that those critics should be appeased by the fact that the PN is again adopting … what? A negative agenda? Is the PN’s agenda being decided by Daphne again?

Of course, dear friendly trolls, it does not work like that.

You can ignore the facts. But that does not mean they’re going to go away.

It is no great talent to stand in front of the camera to do as Adrian Delia did yesterday and deny he ever had sex with that woman, Monika Lewinski. “I did nothing illegal”. And of course the NAO told Konrad Mizzi his power station contract was a best practice model and there has been no corruption.

But it does not mean reality will go away.

It is true. The Labour Party can only be politically overcome by a strong, united Opposition and division amongst those who oppose him guarantee Joseph Muscat perpetual victory. He understands that too and he will use all vulnerabilities available to him to ensure that victory.

There’s no guarantee that if anyone were to replace Adrian Delia, Joseph Muscat’s political career is finished. Joseph Muscat is using every day that passes to suppress the evidence and protect himself.

But it should be clear to everyone, except perhaps those working within 10 metres of Adrian Delia’s desk, that Adrian Delia guarantees Joseph Muscat that safe, unassailable, delinquent future.

Previous:The argument for the Justice protest location
Next:Il Sole 24 Ore on the laundering of Azerbaijan money