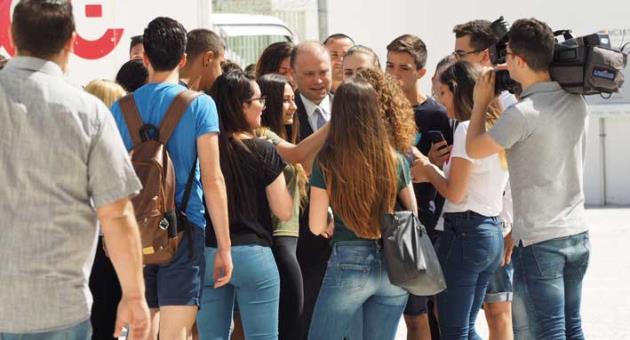 That’s what he wants, right?

As students, we are more than capable of realising that we are extremely lucky, not only because we can attend University for free, but also because we are paid stipends to attend. However, dear Joseph, just because you increase our stipend by 100 euros per year, I assure you that you are not going to buy me.

Education and critical thinking are two essential tools, and many of us youths got to where we got in our student lives with these tools. So, Joseph, we can see what you’re trying to do.

Just because you are getting in lots of money in our country with the cash for passport scheme (because for you it seems that a monetary price suffices on something as precious as Maltese citizenship) and then you increase our stipends by 100 euros per year, you’re not really going to convince us that we are some type of priority to you. What’s even worse is that with reason, we can say that the money that you are getting in with this scheme is not all from legitimate sources, just like the European Commissioner Věra Jourová explained last August:

“It is a big concern when a Russian citizen who has worked his whole life in middle or senior management — where salaries aren’t very high — suddenly has the money to buy citizenship in Malta,”

This means, Joseph, that it seems that you do not really care about both the security of the Maltese or that of the citizens in the European Union, since you’re bringing in suspicious people in our country and the EU (that, by the way, has thousands of opportunities for us youths. But you still worked and tried as much as you could so that we do not become a part of the EU before the referendum in 2003). This is your ‘masterplan’ for the Maltese economy, instead of some type of proper implementation for an innovative and strong economy. Thanks, Joseph.

I would like to assure you also that whoever has a little knowledge on world history knows that money never was and never will be the most important priority in our lives. Everyone knows that our fundamental human rights are our priority. We are mostly interested in living in a democratic state, where human rights, including freedom of expression which apparently your Government cannot stand, reign. Joseph, because we have the capabilities of reading and critical thought, we can undoubtedly see that living in a real democracy is not some sort of a priority for you.

For current affairs in Malta and Gozo, a particular quote shines from the phenomenal novel by Margaret Atwood, ‘The Handmaid’s Tale’ (you know, the same author who called for the resignation of your friend Jason Micallef, together with Pen International):

“Sanity is a valuable possession; I hoard it the way people once hoarded money”.