When your government lies 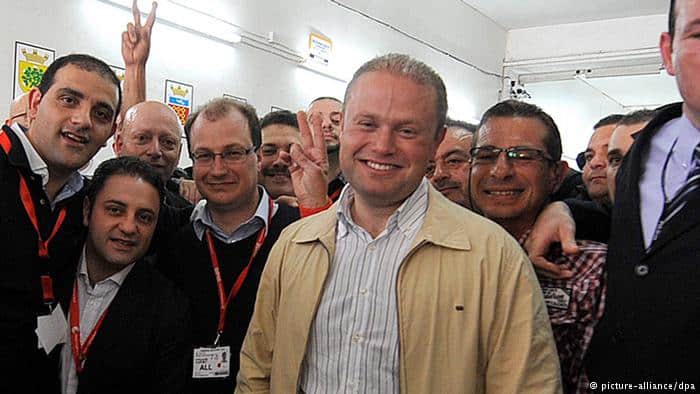 Within minutes of becoming aware of the UK House of Commons committee report confirming that it had seen evidence that contradicts Malta’s official version of events, Malta’s government repeated its line that the charge it met SCL before the 2013 election is baseless.

The distinction is not academic, semantic or pedantic. The fact of the matter is what we have here is the charge that the nefarious shared activities of Christian Kalin and Alexander Nix that effectively manipulated elections, secured political victories for parties that supported Henley’s project of retailing citizenship and in at least one case secured the implosion of an opposition party that was against the project, could have occurred in Malta at the 2013 elections. And since.

Some facts have been established beyond doubt. In 2010 and 2011 when Joseph Muscat was in Opposition both Christian Kaelin of Henley and Partners and Alexander Nix of SCL, later of its subsidiary Cambridge Analytica, were in Malta scouting for clients for their grand schemes.

We know they met the PN because the PN have confirmed this and also confirmed they refused to buy their services. All this has been independently verified.

We know Henley and SCL discussed introductions to Joseph Muscat from sources that worked for the organisations at the time. This is particularly from whistleblowers who worked at SCL and Cambridge Analytica who have spoken of these communications and, as far as overtures to the PN are concerned, have been verified to have been correct. Labour keeps denying.

Labour does that. Repeatedly. It does not mean it is not true.

The SCL/Cambridge Analytica whistleblowers are eminently credible sources that have blown the lid on some very seriously dangerous and undemocratic activities. Indeed of course what has happened in Malta is but a single paragraph of the major report conducted by the UK House of Commons committee. The report is concerned with matters of much greater global import, particularly the use of the methods developed by Cambridge Analytica (and others) to exploit data and social media to manipulate voters.

The election of Malta’s Labour Party and the introduction of the sale of Malta’s citizenship to crooked tycoons is such a policy objective that worryingly may have benefited from SCL/Cambridge Analytica methods.

That’s not unlike Donald Trump’s election or the Brexit vote.

This finding does not necessarily invalidate the outcome of those ballots but it does put into serious question their democratic legitimacy and, far more importantly, it raises questions about the future and whether we can ever hope to have a credible expression of popular, democratic will when these sort of manipulations can happen.

No political party or political leader that has been elected on the basis of this sort of manipulation can even countenance allowing the public to leave with the impression that their election is illegitimate because founded on manipulation that is not illegal only because the laws against it have not yet been designed.

Joseph Muscat will never admit SCL/Cambridge Analytica — or even Christian Kaelin, that Prince of Darkness who even as Alexander Nix got into serious trouble, remained on top — helped him somehow win the 2013 elections.

Not after what was found out about the undemocratic and manipulative methods of Cambridge Analytica. Or about their willingness to use ‘dirty tricks’ and fabricated scandals to manipulate voting outcomes.

Of course, we remember how Labour showed itself to have unlimited financial resources in 2013 when it had been practically bankrupt in 2008. We could all see how their segmentation of the voting population was surgical and stupendously effective. And we could see there was no shortage of dirty tricks in the last two years of Joseph Muscat’s tenure as prime minister in waiting.

The fact that Labour won in 2013 does not in itself prove that they were helped by Henley and SCL to win. They may have very well have won without help. But the circumstantial evidence does suggest strongly this is the case and it has for a long time.

Consider this discussion on Daphne Caruana Galizia’s comments board here where she had already pieced the evidence together and reached the conclusion of what methods Labour was using. Even using those methods — and that is the context of this exchange — to manipulate the choice of the new PN leader after the 2017 election. 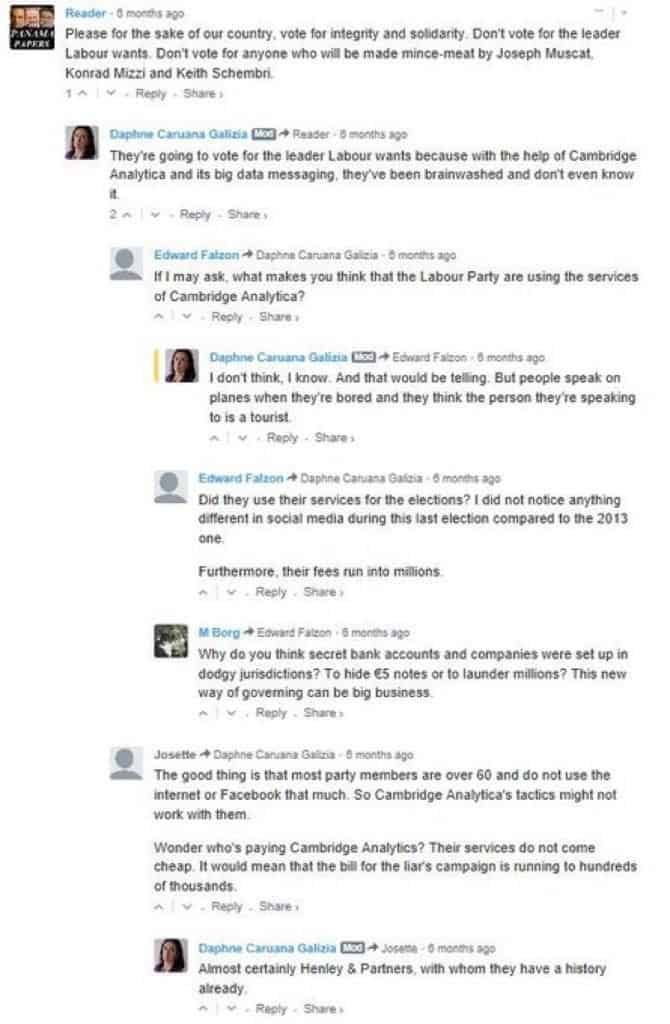 Then of course last April I published a story that said that there is actual email communication between SCL and Henley that shows they discussed introductions to Joseph Muscat in 2011.

Can a journalist publish a story even when the evidence that they have been shown cannot be printed? Sometimes a well-placed source can show you the evidence but cannot allow it to be published because at that point the risk to them is no longer acceptable.

Where here in Malta the burden of proof in a libel suit is on the journalist that is a risky prospect.

But the duty to inform the public ranks higher.

The government could afford to ignore my report between April and July. When in July it was quoted by the UK House of Commons committee’s interim report, it could no longer afford to ignore it. So it bashed it in the harshest language. Fake news, irresponsible speculations, gossip: you name it, they called it worse.

But they did that because they assumed the UK House of Commons committee was exclusively relying on my reporting to reach its conclusions and this sort of barrage would persuade them to drop the issue altogether.

Again it shows how Malta’s Labour Party expects others to do what it would.

By the time they published the final report, the UK House of Commons committee could affirm that their own checks show them to their satisfaction Malta’s government is lying about what the Labour Party did in 2011.

Note that the UK House of Commons committee — as I did in April 2018 — decided to stick to its affirmations in spite of the fact that the information it was relying on was given to it confidentially and that it could not publish them just to “prove” Malta’s government wrong.

Because this is a political judgement that they are making which is only a notch higher than a journalistic judgement. Confidential information that contradicts official statements, based on facts and the direct experience of people who know what they’re talking about because they were there, must be shared with the public to let people make their own judgement.

The government can keep squealing it’s all fake news and all lies. Fact is nobody believes them. And they’re not going to sue a UK House of Commons committee for libel now, are they?

It’s not good form to gloat. But today felt good.

Previous:Repubblika meets the steering committee on constitutional reform
Next:Everyone else is nuts