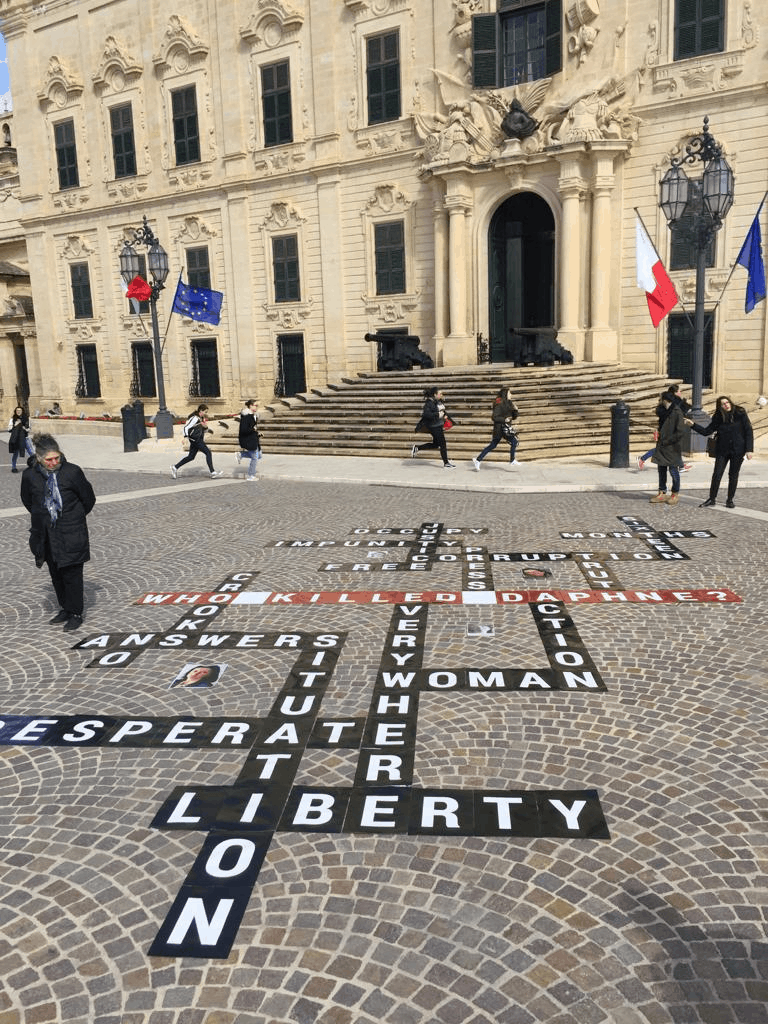 Huge letters shaped into a scrabble-like formation and pointedly asking ‘Who Killed Daphne?’ were laid out in Castille Square on Saturday morning to mark 16 months since the assassination of the journalist Daphne Caruana Galizia.

The action was carried out by #occupyjustice, a group of activists led by women. “The Prime Minister can look out of his office window and enjoy the view of the question that we’ve all been asking for the last 16 months. Maybe that will remind him that the assassination happened under his watch,” #occupyjustice said.

Words like ‘impunity’, ‘corruption’ and ‘desperate’ formed part of the activists’ life-size scrabble, as they insisted that they did not want a country of anarchy, but they wanted ‘answers’, ‘liberty’, ‘action’ and ‘truth’.

“We cringe when we see the Prime Minister PROTECT the two crooks by his side – his Chief of Staff Keith Schembri and his top Minister Konrad Mizzi – both of whom have set up a money laundering structure in order to receive illicit kickbacks from Yorgen Fenech’s 17 Black.”

“We cringe some more when they pathetically try to shut up anyone who asks questions,” they said, in reference to the constant removal of the makeshift memorial set up spontaneously at the foot of the Great Siege monument in front of the Law Courts as a daily reminder that there is no rule of law in Malta.

“Sixteen months on we still do not know who commissioned the killing of Daphne Caruana Galizia and there is not even a semblance of a search for an answer. Prime Minister, Keith Schembri, Konrad Mizzi and Yorgen Fenech, we shall not rest until you carry the responsibility of your actions.”

#Occupyjustice said they are determined to fight for what is right, for justice and for a fair and equal society.

Previous:‘I misled Parliament but that’s ok’
Next:Muscat thinks it’s “horrible” Daphne was killed “because she made allegations about me”