GUEST POST: Here are the real facts on the Air Malta situation 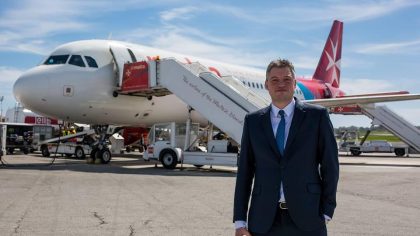 Konrad Mizzi, as usual, tries to blow up illusory successes to his advantage, perhaps to boost his chances of becoming the next Prime Minister, which would mean the first Prime Minister in the European Union who, as a Senior Minister, had opened a secret company in Panama held by a Trust in New Zealand for laundering illicit gains from commissions on major infrastructural projects. He would also be a Prime Minister, who has pending FIAU reports recommending that investigations are started against him for potential money laundering.

This time, he boasts of what he calls the first positive financial results of Air Malta, and mentions an operating profit of Euro 1.2 million before restructuring costs and non-recurring items.

In this article, I intend to explain some terms used and what they actually refer to, and also to analyse some key figures in the audited financial statements (accounts) for the financial year ended 31 March 2018.

Restructuring costs – Air Malta has been incurring losses on its core Airline business for several years and, in order to address the Airline’s commercial challenges, its Restructuring Plan was devised setting out the turnaround strategy for the five-year financial period 2012 to 2016. As a result of the Restructuring Plan, which was approved by the European Commission, the Government (that is the taxpayer) gave an aid amount of Euro 120 million to Air Malta to strengthen its capital base.

Notwithstanding a number of positive developments throughout the period, the Airline’s operating results from continuing operations for the period from 1 April 2013 to 31 March 2016, were worse than the projected results reflected within the Restructuring Plan.

The Board of Directors has now approved a revised 3 year business plan covering the period from 1 April 2019 to 31 March 2021.

It is pertinent to point out however, that in commenting on the Airline’s financial results subsequent to 31 March 2018, the report states that ‘in view of a number of unforeseen matters, the Airline will most likely register operating losses from continuing operations during the year ending on 31 March 2019. This assumption is based on information available to the Company as at April 2019, and particularly in view of the volatility of fuel prices’.

Financing commitments – One of the main problems of Air Malta, has always been that of having the availability of enough funds to finance its operations, which are continuously lacking in view of the substantial losses that the company has incurred since inception. In fact, the accumulated losses of the company at 31 March 2018, amounted to Euro 223 million, and the company had a negative equity of Euro 35 million. This means that the company’s current value is NEGATIVE and therefore its value is a nominal 1 Euro, which is the price which ALITALIA was prepared to pay to take over the company.

The only tangible values that the company had were the London landing rights (slots) and the land and buildings consisting of an aircraft hangar and maintenance areas, together with surrounding land.

The London landing rights were sold to an associate company set up for the purpose, as a creative way of securing funds for the company without falling foul of EC Aid Regulations. These rights were sold for the price of Euro 57 million (paid by the Government) and as stated in the report, ‘partially addressed the precarious financial situation of the company’.

In fact, the report also states that, should the need arise, the company will leverage (probably sell) the company’s land and buildings mentioned above, which were revalued by Euro 18 million and are now showing at a value of Euro 21.2 million. The property valuation was carried out on the assumption that the property has development potential in relation to transportation, logistics, warehousing and cargo uses. The report states that the current planning policy parameters are devoid of clear and unequivocal information, and that by allowing the current circulation spaces, the built footprint can be increased to accommodate further development, subject to the submission of a masterplan proposal to the respective planning authorities.

Operating Profit – the operating profit of Euro 1.2 million which Konrad Mizzi boasted about, is arrived at after increasing revenue by an amount of Euro 3.2 million (referred to in note 23.1 of the financial statements) as a result that, in the previous financial year, the company directors reviewed and revised estimates of the period over which the gross value of unsold tickets is taken to the profit and loss account. The period was changed from 18 months to 12 months. As a result, the amount which would have been accounted for after 18 months, is now being accounted for after 12 months, and this left a positive impact on current financial period.
Without this adjustment, the company’s operating results would have been a loss of Euro 2 million.

Aircraft Fuel and Oils – This major expense for the Airline represented 21.7% of the Operating Revenue. The average for the previous nine years was 28.7%, with the highest at 33.1% in 2012. This shows very clearly that the operating profit depends entirely upon the fuel cost, which is determined by the market and not by Konrad Mizzi. The only contribution management can make in reducing fuel costs, is through hedging agreements which are inherently high risk.

Employee Benefit Expense (Salaries, Wages and Social Security) – the company has provided an amount of Euro 18.2 million (2017 – Euro 3 million) for a voluntary redundancy and early retirement schemes as well as a one-time payment to employees emanating from restructuring agreements.

The Board had agreed a detailed formal plan for the restructuring, which identified the function and approximate number of employees not exceeding 140 who will be compensated for terminating their services.

Up to 31 March 2018, 450 staff members are currently being granted entitlement to the voluntary and early retirement schemes established as part of the Restructuring Plan.

Air Malta has since inception under the responsibility of Wistin Abela, like many other Government entities been a vehicle for corruptive practices during election time, and was turned into a Labour Party Airline.

Emission Rights – Another Negative result for Air Malta is the shortfall of emission rights, that is, a failure in its responsibility towards the environment. With effect from 1 January 2012, air transport was included in the EU’s Emission Trading Scheme and an aircraft operator is obliged to provide an emissions permit for each tonne of carbon dioxide emitted. The competent European Authority computed the free allocation of allowances to Air Malta. Emissions surpassing this allotment have to be covered by the purchase of additional certificates.
At 31 March 2018, Air Malta ended with a shortfall of 22% on the allocated rights, equivalent to Euro 635,000.

The continuing operation of Air Malta, which is termed Going Concern, is entirely dependent on the continued financing by the Government (that is, the taxpayer) as, despite the capital injection of Euro 120 million and the amount of Euro 57 million received on the cosmetic sale of its landing rights (slots) in London, the current value of the Company is currently BELOW ZERO.

In the meantime, the Company can only contribute minimally by selling the land and buildings, subject to the necessary development permits being obtained (on which I have no doubts, particularly if this is sold to some friendly developer with some commissions on the side) and any other landing slots it may have in other European Airports.