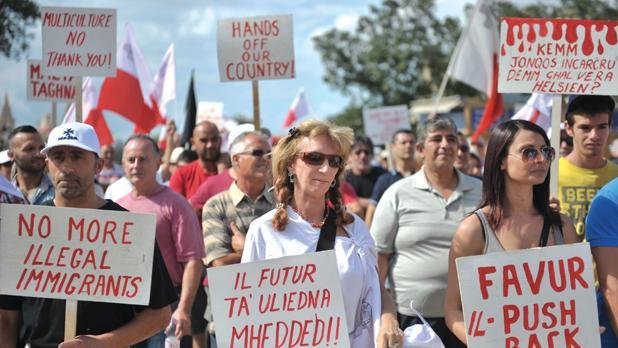 Joseph Muscat and Adrian Delia yesterday spoke about racist discourse as if others had done it.

I despise everything the Norman Lowells and the Patriotti of this world stand for. Norman Lowell openly denies the holocaust. He speaks about killing people in a way most people would feel awkward recommending leaving poison for rats. The Patriotti are no less callous for avoiding mimicry of brown shirt thugs. They sow hatred and division, pinning the problems of a country on a harmless, vulnerable minority and proposing a solution for the country at the expense of that minority.

I do not hold the brief for the neo-Nazis and for the proto-fascists. I do not defend them nor do I wish for anything short of a biblical plague on them that would cause them to go mute.

But to scapegoat these evil, cruel nutcases for the state of race relations in this country brings us nowhere nearer a just society that is welcoming of those in need and inclusive of all its members.

When Joseph Muscat leaves people bobbing on the high seas refusing them entry until someone else takes pity on them and promises to take them on he may – though that is doubtful – be acting within the law. But he is certainly discriminating on grounds of race. If the people rescued at sea were voters from Burmarrad, or Għajnsielem or Marsaxlokk, he’d swim out for them himself. As it happens they’re from Lagos or Accra or Yaounde so they’re ok throwing up on each other in abject misery and in fear of imminent death.

When Adrian Delia goes around Marsa whipping up emotions about how unsafe people feel because so many black people live among them, he is not proposing any normalisation of race relations. He could argue, rightly, that ghettoisation is counter-productive and explosive. But then he’d have to argue about housing policies to spread immigrants throughout all neighbourhoods and measures to have them integrated in the community.

I could go on listing examples of actions and remarks by the mainstream party leaders that should be front and centre of the conscience examination Joseph Muscat was brazenly asking the rest of us to do.

Although we got some standard off the shelf ‘thoughts and prayers’ remarks yesterday, the case of Lassana Cisse continues to emphasise just how wrong our race policies and attitudes are.

Consider for example the fact that only Graffiti had the insight to use the proper term for what it is that the two soldiers charged with killing Cisse and trying to kill others did: “terrorism”. My complaint here is not that the two soldiers are being treated lightly. They clearly aren’t. The charges they face are the gravest on our statute and the penalty they risk is life: as bad as it gets here.

But the term ‘terrorism’ is not only useful as an aggravating circumstance in a criminal prosecution. It is also a vitally important descriptor for crimes that intend to achieve more than the narrow outcome of the incident itself. When these soldiers shot three men they never knew and had never seen they weren’t merely seeking to kill them (although in criminal terms that’s the worse thing they could have done).

They were also trying to instill terror and hopelessness in others who might feel they could just have easily been in their place or are likely to be there next time.

We need to recognise that because if we just think of this as murder, however heinous, we’ll think we have solved the problem once we’ve locked up the perpetrators for good. And we’d be wrong.

Terrorism is bloody and murderous. But it is also a political act with determined political objectives. Fear is a policy tool where the policy objective is exile of a minority, its utter exclusion from the community even for a very limited physical presence.

Looking at this crime as a murder and fixing it in the context of what Norman Lowell or the Patriotti say, politically (though not criminally) excuses the terrorists. It makes them the product of someone else’s madcap, fringe rhetoric. It reduces them to impressionable young men who played too much Call of Duty and allowed Norman Lowell to charm them.

Looking at this crime as a terrorist attack obliges us to take a deeper sociological look at the occurrence, placing it in the context of the broad relations between races in this country. In that analysis the discourse of the fringe right is a symptomatic manifestation, but not the cause.

And it is imperative to understand the cause.

Now contrast the failure to describe this murder as a terrorist attack, with the liberal use of ‘terrorism’ (even as an aggravation to a criminal charge) to three teenage immigrants who appear to have been stuck between people traffickers that scammed them out of Libya and the Maltese authorities who treated them as pirates and are looking to lock them up for a huge chunk of the rest of their lives.

In that case, the term ‘terrorism’ is not helpful in any way. The three boys sought nothing more than their own salvation from sea. They did not have any political objective. They did not aim to scare all seagoing captains in the Mediterranean. It doesn’t even look like they were trying to scare the captain of the boat they were on.

The term ‘terrorism’ should apply where the action seeks to create ‘terror’. It should be obvious. But crimes committed by white people and crimes committed by black people are treated and understood to be different by virtue of the skin colour of the alleged perpetrator.

That is when you know you really have a problem with racism.

The Archbishop yesterday characteristically showed leadership when our civil leaders failed. His fund-raising event is partly going to help Lassana Cisse’s family, acknowledging that Cisse was here in Malta to send remittances to his family in the Ivory Coast and to relieve them of the abject poverty they live in there. His death is their starvation.

The rest of the country cannot make that leap. The Ivory Coast is not a ‘place’ in people’s collective cosmology. Ivorians are not ‘people’.

Instead what we see is a black man who is living in ‘our’ country that can never be his. And now he doesn’t live here anymore.

That, you see, is what racism is. Before the arrests of this weekend, politicians repeatedly defended their racist leadership by reminding us that just because they speak about black people doesn’t make them racist. Next they’ll be telling us that some of their best friends are black.

The Prime Minister suggested yesterday we could transform this ‘tragedy’ into a lesson so we can turn the page and cleanse ourselves of our prejudices. It is not a terrible thing if the seeds of hatred sowed by Norman Lowell and the Patriotti find less fertile ground.

But it doesn’t address the real big issue here. Perhaps voters who are relieved by the simple solutions provided by the far right needed an actual murder to be shaken out of their stupor. But what’s Adrian Delia’s excuse?

More importantly, what’s Joseph Muscat’s excuse? His was the responsibility to lead this community on the values of compassion, inclusion, equality and access. Instead he propounded greed, egoism, stratification and exclusion.

Every day Lassana Cisse was here he faced that exclusion and had to try to survive in spite of it. He was killed every day he was here, until he died.

Previous:They turned the guns we gave them on us
Next:WATCH: The EU and the rule of law: more bark than bite?