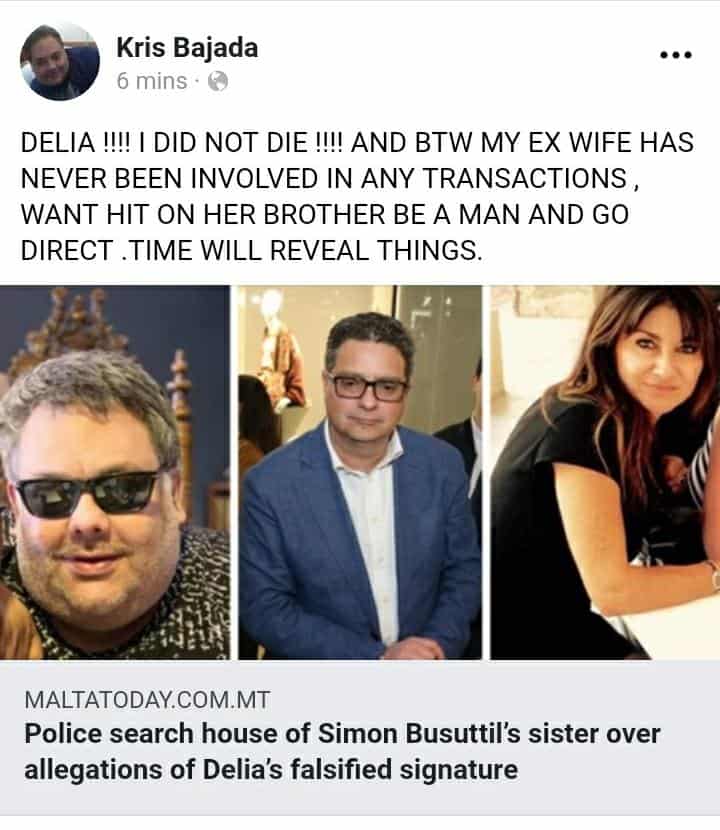 Adrian Delia is facing a fresh set of allegations. This time he is accused of lying about authentic signatures of his having been falsified, effectively framing his predecessor’s sister for a crime no one has committed.

They’re allegations, yes. And they’re made by his former business partner, Kris Bajada, whose credentials are, at best, dubious.

But these are not the allegations of some jilted lover a politician had an affair with, in a moment of weakness and lived to regret it when this blast from the past found a way of making a quick buck by kissing and telling.

The source of the allegations is a man that Adrian Delia chose as his long-time buddy and eventually business partner.

Another set of incredibly serious allegations made against Adrian Delia came from his wife. She alleged he beat her and their children.

They were allegations, yes. And the source was an unhappy wife that was seeking separation. Some peppered their doubts about her credibility by putting in the mix the mental condition she publicly acknowledged, though the assumption that condition could impair her judgement is dubious at best.

The pattern here is that the people that Adrian Delia chose to be closest to him in his life are his primary accusers.

The emergence of Kris Bajada from a coma to charge Adrian Delia with lying about his signatures being falsified would have been an over-extended plot-line in series 9 of a soap opera that has outlived its welcome.

And yet, here we are.

As Adrian Delia juggles elephants and crocodiles in the air, whipping whatever support he has left to survive, a fresh set of allegations fall over him.

There are layers underneath Kris Bajada’s fresh allegations. The first layer starts with Daphne Caruana Galizia’s reporting about Adrian Delia’s connections to a Soho prostitution ring. On top of that layer is his reaction, charging her with that biċċa blogger speech that showed a man who cannot control his anger and is incapable of understanding what the roles of politicians and journalists entail.

Then there’s the layer of continuing investigations into Adrian Delia’s past affairs. That exposes him to blackmail by his political rivals who hold the keys to what would happen with those investigations depending on the extent of his compliance with their wishes.

It seems that Kris Bajada is also suggesting he is aware of incriminating evidence.

It’s ironic but if you read Malta Today’s excellent reporting of this story you discern the line Kris Bajada is seeking to draw here.

On the one hand, he claims that the family business in London was not illegal and the money involved are not proceeds of crime. That claim seems implausible, even incredible. Renting out apartments in Soho that were raided by the police for white slavery and prostitution without actually having anything to do with the prostitution activity itself is just not a credible claim. In any case, Kris Bajada is not likely to make statements that incriminate him or his relatives.

That portion of Kris Bajada’s line would protect Adrian Delia because it would refute the charge that Adrian Delia laundered for his clients and partners proceeds of prostitution. It explains why for some time while Adrian Delia was seeking election as party leader, Kris Bajada was right by his side.

Why would Adrian Delia lie about documents that if authentic would not, as Kris Bajada insists, prove he was part of a crime?

Because — here’s another hidden layer — Kris Bajada seems to be suggesting that while the Bajadas were part of no crime and have nothing to hide, Adrian Delia was and does.

Kris Bajada’s tone further suggests that he and or his family are the victims of that as yet barely specified and only hinted at wrongdoing.

That now suggests that Kris Bajada has more up his sleeve. And he’s had it all the time that Adrian Delia has been a candidate for the leadership and now as party leader.

When Daphne Caruana Galizia first reported on the Soho affair, many thought Adrian Delia deserved the benefit of the doubt and that he would eventually clear his name.

But by some fluke, the reawakening of Kris Bajada, formerly comatose, tells us that if Adrian Delia remains just where he wants to be, we might just learn more.

None of it good.

Perhaps when they meet today to listen to his snake charming honey talk, the members of the PN Executive Committee ought to keep in view the fact that no one is promising that things are as bad as they can get.