This is the second part of a series arising from an interview with an ex-staff member at the AUM. Part 1 is here.

According to the information originally published on its website, the American University of Malta ‘was officially born on 16 September 2016’ although what it was actually doing at this time is open to serious investigation.

Two years previously, 90,000 square metres of protected ODZ land at Zonqor was proposed for the development of the AUM campus.  This led to widespread opposition with thousands of people joining what was the biggest environmental protest ever seen in Malta. By this time, however, the Government of Malta had already signed the agreement with Sadeen Group (or Sadeen Education Investment Ltd aka Hani Salah) on 5th May 2015.

Shortly after the protest, the original proposal was scaled down and the second assessment exercise included the current location at Dock 1, Cospicua, as well as a site at Zonqor Pool which was recommended as the first priority: ‘Given its size, the site cannot be considered on its own but in conjunction with the original Zonqor site identified in the first report.’

Despite this, Joseph Muscat cynically tweeted proof of his willingness ‘to listen and engage with civil society’.

One week later, the Independent described the government’s cheap renting out of the Zonqor-Cospicua sites to the AUM as ‘nothing short of an outright steal.’

On 15th December 2015, an all-night parliamentary debate lasting 15 hours ended with 2 sizeable areas of public land at Cospicua and Zonqor Point being transferred by the government to Sadeen Education Investments Ltd, otherwise known as Hani Salah. 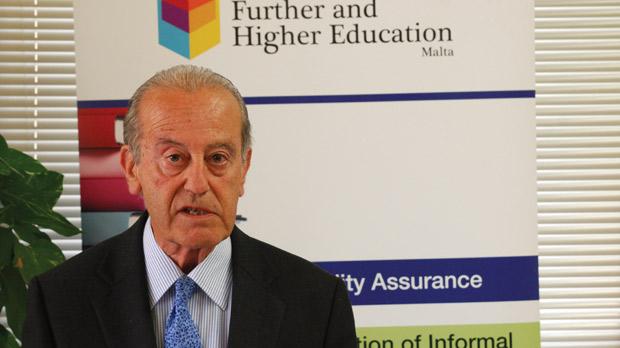 This was before the AUM was even granted university status, a title awarded by the National Commission for Further and Higher Education on 30th June 2016 with certain conditions attached.  The commission was chaired by Martin Scicluna, a rancid defender of the Labour Party with an undisguised contempt for Daphne Caruana Galizia, both in life and in death, and who exposed the fraudulent nature of the AUM every step of the way.

On 19th September 2016, news reports stated that the AUM had been given a 5 year license to operate as a university in Malta. According to the Independent, the NCFHE announced this the previous day (18/9/16) while the Times reports that the statement was issued that night (19/9/16). Yet the AUM was ‘officially born on 16 September 2016.’

Hiring and firing in the land of no students

All the projections for the AUM refer to an anticipated student body of approximately 4,000 although Martin Scicluna gives his own particular breakdown: ‘As to its academic operations, the University plans to host approximately 4,600 students in its five Schools within ten years of starting operations, gradually building up throughout this period. The enrolment is expected to increase over the first 4 years from 100, to 350, to 710 and 1,220 students respectively. It will build up to 4,600 by the tenth year. The number of academic staff for the first four years of operation is expected to rise in stages from approximately 8 to 22, to 46 and 79, slowly building up in line with the number of expected students, reaching up to 271 academic staff in the tenth year.’

Prior to the mass firing of faculty members in January 2018, the AUM had dismissed almost a third of its academic and administrative staff without explanation and just before the 6 month probationary period was up.

In 2017, when the first faculty members were employed, student numbers were very low according to the ex-employee interviewed: ‘[There were] about 15 to 23 but a lot of them dropped out or disappeared. There were several – where were they from? – Bangladesh or Indonesia, I forget, who came there and they were getting these student visas but once they got into the EU, they just disappeared…Identity Malta…predicted this would happen and so we were trying to put all these safeguards in place to prevent it but, you know, there was not much we could do.’

It leaves you wondering what the people employed by AUM as teachers and admin staff were doing with such a minimal student body. What, for example, did the then Dean of Student Affairs, Joshua Moon Johnson, actually do before he resigned?

‘Well, I mean, 20 students, you can do some activities… A lot of what he was doing was helping with marketing as well as with recruitment, admissions, because, of course, we didn’t have enough students so a lot of resources that would otherwise have gone in one direction were in the other direction because…Chiara [Ludovica Battistelli] who was Head of Admissions was doing a lot of the recruitment stuff, she got fired so now there’s this huge gap.’

Battistelli, as well as the former deputy project manager, Eduardo Pagani, sued AUM on the grounds that their dismissals were a breach of fundamental rights. Battistelli claimed she was given no explanation for her dismissal which, like all the faculty members, occurred just before the end of her 6 month probationary period.

Pagani maintained that allegations used to remove him from his position were fabricated. Having had his original 6 month contract extended along with a protective clause, he received 3 warnings between 15th and 22nd May 2017 following the appointment of a Jordanian engineer, Raied Ebaid, as project Manager.

Although not directly related to Pagani’s dismissal, the ex-AUM employee referred to random responses towards staff behaviour. Some faculty members allegedly violated their contracts by keeping their jobs in the countries they’d left but Ryder’s advice was, allegedly, ‘Just ignore it.’ Assuming this is true, then an arbitrary rather than rule-bound attitude to staff conduct was in operation, without adherence to a legal framework which, crucially, protects the employees as well as the employer.

All the excitement of a brand new academic year

Meanwhile, the first semester of this alleged university was supposedly getting underway. A handful of students awaited the newly appointed faculty members so they had to find ways to occupy themselves and, one would hope, justify their lucrative pay package:

‘There weren’t enough students for everyone to teach so some of the faculty did administrative work on the site… They had offices. There was a kind of open office area with dividing rooms. They would come in. They would prepare their lessons. There was a lot of socialising that went on. We had some events…We even had a series of talks given by faculty members which turned out pretty well…They were given to other faculty members. The community was invited but nobody came…Basically, you’d have the faculty there and one faculty member giving a talk as well as some of the staff, especially those who were more academic…So we were a community.’

John Ryder gave one of the talks and, with each session attended by about 13 to 15 AUM staff, research was disseminated amongst each other in what could be described as the Mary Celeste of knowledge sharing.

Indeed, the number of staff attending these in-house events mirrors that of the students which, at the beginning of the second semester in 2018, was said to stand at 15 with only 3 staff members having been retained: the registrar, the librarian and the quality assurance manager, although it’s hard to imagine what kind of ‘quality’ was being assured.

15 students is a far cry from the 1000 students excitedly proclaimed in the AUM’s promotional video of 2015, a video as lacking in quality assurance as its website.

Scicluna’s prediction of an initial staff team of between 8 and 22 likewise becomes laughable. But it wasn’t funny. Not for those who got fired, nor for those who remained, nor for the new staff who arrived to fill the shoes of the old.

Having been given one week’s notice of their termination, 12 highly educated and qualified academics were stranded in Malta bereft of a job: ‘Most of them wanted to stay even after they were fired’ and some turned to the University of Malta. While not part of this round of dismissals, Battistelli is now in the role of Projects Support there.

Another person mentioned by the ex-AUM staff member is Edward Mifsud, currently a Junior College lecturer in Biology at the University of Malta.

We are excited to welcome Dr. Edward Mifsud to the faculty at AUM. Dr. Mifsud is an Assistant… https://t.co/5hG6eVV9pW

His arrival at the AUM was joyfully tweeted by the AUM on the 31st August 2017 although there’s no mention of this employment on Mifsud’s University of Malta webpage.

Mifsud is described as ‘super pro-Labour…I thought this guy is an insider. I think he’s a spy for the Labour government. I think he’s put here to keep tabs on what’s going on…but…guess what? He got fired and I’m like why would they fire their own guy, right? Well, right after he gets fired, guess where he gets his next job? The University of Malta.’ If you look at Mifsud’s University of Malta webpage, he’s been there since 2009 and you’d never have guessed he’d left.

Many staff who weren’t sacked ended up resigning due to what’s seen as ‘survivor’s guilt’: ‘When the new wave of people came in, guess what? They found out what happened to their predecessors and they looked at the people who were still there and said, what are they doing to stay here? Are they going to the owner and telling him lies or…There were a lot of rumours and strange things went around because everyone got very paranoid.’

This paranoia and suspicion is implicit to comments reportedly made by Ryder cited in Part 1 when he referred to two Maltese members of staff as ‘PN…not PL.’

You begin to wonder if we’re in Cospicua or the KGB. Questions arise as to why John Ryder, an apparently just-landed American academic, was intimately acquainted with partisan politics on a small Mediterranean island and, more importantly, why he cared. To any objective outside observer, particularly one with strong academic credentials, such matters would surely seem some crude backwater anomaly.