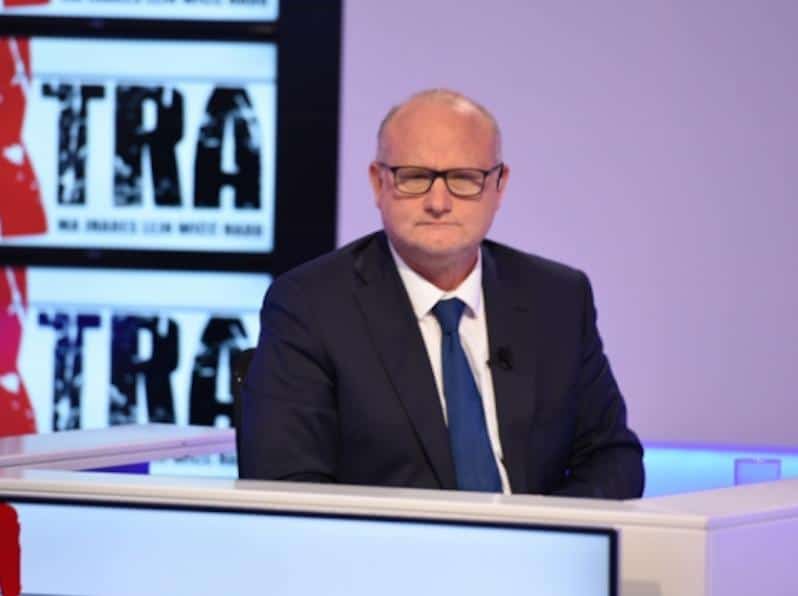 Dredging up the dregs is what scraping the barrel is all about and when you watch the dregs scraping away at their own bottomless cesspit, it’s not a pretty sight.

We witnessed this in all its putrid glory last week when, amongst all the copious corruption cases which constitute our daily fare, there was Saviour Balzan using his rag in exactly the gutter press manner it’s designed for. What was it he said about having ‘divested himself from the day-to-day running of the MaltaToday newsroom’ and not being ‘physically present for editorial meetings’?

Oh, yes. That was when he was caught operating hand in sticky glove with the government he quite literally works for. Business 2 Business Ltd, a company Balzan owns singlehandedly, has Infrastructure Malta as one of its clients and is paid handsomely by Ian Borg to run adverts promoting the highly controversial Central Link project. Media Today, the publishing house of Balzan’s grotty rag, booked ads all over the place to try and convince us, the ‘gullible’ public, that the massacre of trees is a good thing.

As well as raking in a small fortune from all these lucrative government contracts, Balzan’s Business 2 Business Ltd which, if it wasn’t clear, he owns all by himself, also buys and sells advertising for Malta Today, the newspaper which he edits and co-owns. Taken together, this amounts to a hell of a lot more than the paltry items he accused Ivan Camilleri of shoplifting in his pathetic attempt to smear a journalist who vociferously exposes one corruption scandal after another. Funny how Balzan picked on him, isn’t it?

Saviour ‘I take phone calls from Keith Schembri at 1am’ Balzan concocted a laughable story about the evil anti-corruption journalist who stealthily sneaks ‘an unspecified amount of highly-priced goods’ past the supermarket cashier. The words ‘unspecified’ and ‘highly-priced’ give the game away even if nothing else does. Spinning into being a villainous character straight from a stereotypical fairy tale, once Saviour’s inner demons are unleashed, he simply doesn’t know when to stop, particularly when he thinks he can safely rely on his government’s state-captured judiciary to back him up.

Evidence provided by the Times of Malta foiling Balzan’s cunning plan wasn’t enough for a cheap tabloid hack like Saviour. Times of Malta were categorical in their interpretation of Balzan’s behaviour: ‘The two articles Mr Balzan wrote are littered with malicious innuendo and appear to have been written with the intention of misleading readers into believing that Mr Camilleri committed a crime.’

True to twisted form, Balzan fired back with a libel suit against Camilleri ‘to ensure that the truth be known and to prove that in every article he wrote as a journalist, he had been guided by the truth and not any intention to tarnish anyone’s reputation.’ Truth, for Saviour Balzan, has the same allure as a flamingo to a Maltese hunter.

The same could be said for that other pinnacle of puritanical purity who piped up with a libel case against Manuel Delia, another powerful critical force against this criminal organisation masquerading as a government. Raphael Vassallo works for the same propaganda outlet as Balzan and has been very selective in his choice of lawyers. They’re the ones who represented Saviour’s pillow talk pal, Keith Schembri, who, not content with enjoying impunity when exposed in the Panama Papers, filed a libel case against Simon Busuttil for daring to accuse him of receiving kickbacks.

Let’s just remind ourselves that it’s almost exactly a year ago since the owner of 17 Black was revealed as Yorgen Fenech, Director of Electrogas. Fenech didn’t mount a libel case against Times of Malta which leads one to conclude that even this crook couldn’t seem to find a hollow legal leg to stand on. Let’s not forget that it’s Balzan’s bedtime buddy, Keith Schembri, who owns a Panama company set to receive millions of euro from Fenech’s 17 Black. Not only have there been no arrests and no criminal investigation of Fenech’s highly illicit business activities, not to mention Schembri’s continued position of privilege as Muscat’s right-hand man, but now we have another yellow-livered member of Balzan’s brigade not only suing Manuel Delia but relying on the lawyers of that criminal Schembri to do so.

It doesn’t take a rocket scientist to work all this out. You scarcely need to join the dots to see where all roads lead.

Just as Balzan piously uses the word ‘truth’ in vain, Vassallo defends a reputation which he simply doesn’t have, whingeing that Delia’s (misinterpreted) statement ‘constitutes a malicious, deliberate and unequivocal attempt to damage my professional reputation as a journalist, on the basis of a blatant lie.’

Vassallo further resorts to the concept of ‘freedom of expression’ in the same perverted form as that bandied about by Uriah Heep, otherwise known as Owen Bonnici, the Minister for Justice and Culture. While his minions busily remove freedom of expression during their nightly ‘cleansing’ of Occupy Justice’s protest, Bonnici steadfastly defends Jason Micallef’s disturbing mockery of Daphne Caruana Galizia five months after her brutal assassination. In Leeuwarden during the shambolic event known as Valletta European Capital of Culture, Bonnici was reminded of the responsibilities that come with freedom of expression, responsibilities further underscored when, like Micallef and Bonnici, you’re in a position of public authority. Donning the mantle of divine representative for the ex-general secretary of Partit Laburista, Bonnici insisted that ‘I will not censor anyone for expressing his thoughts.’

Sounds suspiciously like the newly inaugurated Hate Crime and Speech Unit, an event coinciding with the Hal Far riots which led to the arrest of 107 migrants living in the sub-human conditions of the Open Centre. With 2 legal aid lawyers to represent them, these arrests were swiftly followed by news of horrific mistreatment in Corradino prison.

Leaving aside the gaping disparity between the meagre legal support given to over a hundred people and the pro-government heavy weights enlisted by Vassallo, Michael Farrugia sustained Bonnici’s (and Vassallo’s) distorted concept of ‘freedom of expression’ when he stated that ‘we will not be going through every comment on social media on a witch-hunt and flood our courts.’

In other words, the hate crimes committed by people calling for migrants to be thrown into a huge cauldron and set on fire along with their kids, or shot at sea, will remain unpunished.

“I would throw them in that huge cauldron and set them on fire.”

“With the kids and all.”

“Shoot them at sea. Target practice.”

Just a selection of the #hatespeech following the Ħal Far riot. #humanrights#Refugees #ViolenceDoesNotResolveViolence

Impunity. Christ, doesn’t that have a familiar ring?

Meanwhile so-called journalists attack professional journalists and they do this with every measly means they can scrape together, including blatant lies if we want to use Vassallo’s terminology.

The truth about Ivan Camilleri’s imputed attempt to carry out a dastardly heist on ValYou has already been documented by the Times of Malta.

Rafael Vassallo, on the other hand, remains loyal to the irrational line of reasoning attributed to him by Daphne Caruana Galizia.

Take this, for example:

‘Funny, isn’t it, that a nation would lose trust in a media sector that is evidently more concerned with playground battle-tactics, than with getting on with the business of reporting on the state of the country?’

You see, this isn’t Manuel Delia speaking but Vassallo himself in a piece he wrote back in April with the headline ‘Reporters Without Braincells, more like it…’ No guesses for who he was attacking with all the panache of a pre-pubescent wannabe. Vassallo’s intellectual grasp on matters is as pitiful as the logic he uses to file a lawsuit against Manuel Delia.

His surly contempt for Reporters Without Borders rests on his unsubstantiated premise that the only people consulted for the NGO’s report into Press Freedom in Malta were – you’ve guessed it – Manuel Delia and Caroline Muscat. These 2 individuals, disregarding the assassination of Daphne Caruana Galizia with complete impunity, are, according to Vassallo’s logic, singlehandedly responsible for Malta’s rapid deterioration in the media freedom stakes.

This is almost as convincing as the government’s assertion that expert European bodies and South American taxi drivers are being duped by wily Machiavellian traitors. And let’s not even bother mentioning that the majority of media in Malta are owned and controlled by the government who, as it happens, Balzan works for – the same guy who employs Vassallo to work on his rag.

The week in which libel cases were mounted against two well-known anti-corruption journalists ended on Saturday the 2nd of November: the International Day to End Impunity for Crimes Against Journalists. Daphne Caruana Galizia’s name has been added to the CPJ’s Global impunity Index 2019:

‘In recent years, unchecked anti-press violence has spread to places previously considered relatively safe for the media. The October 2017 car bombing that killed blogger Daphne Caruana Galizia in Malta, followed by the murder of Slovakian journalist Ján Kuciak in February 2018, put journalists in the EU on notice that covering crime and corruption can be deadly. Slovakia indicted four people, including the suspected mastermind, earlier this month. However, authorities there and in Malta have failed to achieve convictions in either case.’

Manuel Delia no more accused Vassallo of direct involvement in Caruana Galizia’s assassination than Ivan Camilleri became a supermarket criminal, but both journalists are heavily involved in exposing the corruption in which we’re immersed. Just as Delia aligned Vassallo with ‘the silent conspiracy of people who elect to say they believe the mafia does not exist’ https://manueldelia.com/2019/11/unwitting-or-witless/ so, too, the filing of vexatious lawsuits is an integral part of this.

In an interview published eight and a half months before her assassination, Caruana Galizia speaks of the excessively dangerous libel laws in Malta which ‘pose a very great threat to freedom of expression and critical journalism because they create a “chilling effect”.’

While the libel suits mounted against Manuel Delia and Ivan Camilleri may seem frivolous and laughable, the ultimate chilling effect is murder. This is the context in which Saviour Balzan and Raphael Vassallo are issuing their threats. Even if they are meant to serve as distraction techniques, what they are trying to detract from are the very powerful forces aimed at stifling opposition to the mafia network in which a journalist was assassinated while, at the same time, serving the same bloodthirsty cause.