Tom Hagen: When a plot against the Emperor failed… the plotters were always given a chance… to let their families keep their fortunes. Right?

Frank Pentangeli: Yeah, but only the rich guys, Tom. The little guys got knocked off and all their estates went to the Emperors. Unless they went home and killed themselves, then nothing happened. And the families… the families were taken care of.

Tom Hagen: That was a good break. A nice deal.

Frank Pentangeli: Yeah… They went home… and sat in a hot bath… and sometimes they had a little party before they did it.

It is doubtful Melvyn Theuma had a party tonight. Today the court ordered that the details of his own sweet deal with the state to testify on its behalf in the people’s case against Yorgen Fenech be made known to it. And tomorrow it would have.

The police did something extraordinary today. Within minutes of their bloody discovery they issued a written statement about a violent case. The police’s statement included the police’s preliminary view that the violence was self-inflicted. And, even more unusually, the statement identified the person who they believed harmed themselves: Melvyn Theuma.

The police do not habitually report suicides. They especially do not report attempted suicides at the time when the attempt has not proven, for want of a better word, successful. And they even more especially hold on to a conclusion of likely self-harm if the victim appears to have tried to kill themselves by slitting their own throat and stabbing themselves in the chest. And the police especially do not generally name the person concerned in a press statement.

But then Melvyn Theuma is no ordinary person and the circumstances of the case are not ordinary either. On this man, so far, the case to bring to justice the mafioso the state has charged for killing Daphne Caruana Galizia may depend.

The point of the secrecy of the pardon he secured though is that Melvyn Theuma was bound to testify on other things as well.

Physically, Melvyn Theuma may or may have not been alone tonight when the first drop of blood came out of him. Only he knows that and like a lot of things we have to wonder if he’ll be around tomorrow to speak of what happened tonight.

But not all self-inflicted wounds are the exercise of the will of the victim.

Earlier tonight, lawyer Gianluca Cappitta who is unconnected to the case wrote on Facebook that this morning he spotted a hangman’s noose hanging from a signpost outside the court building. 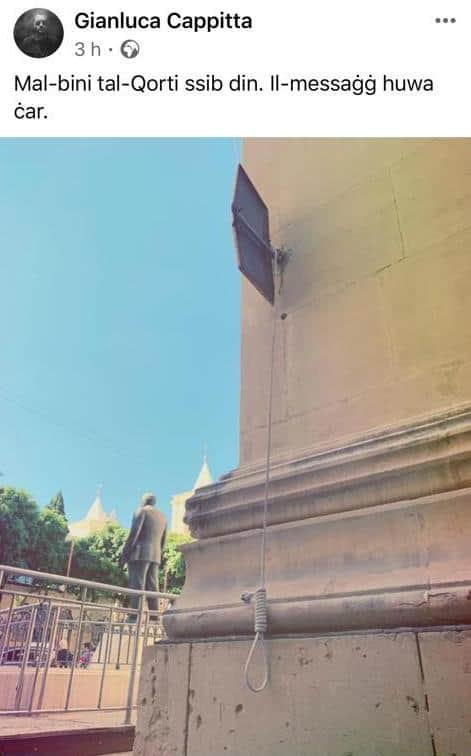 Melvyn Theuma tests the limits of my human sympathy. I still find it impossible to worry about the well-being of a man who, against payment, arranged for the killing of someone he did not know.

There are far more people who are more obviously deserving of concern. There are people that have risked everything to bring these mafiosi to book: policemen, prosecutors, lawyers, witnesses, magistrates. Are they being allowed to live and die in the shadow of the mafia’s noose?

And, if you can, as we fear that justice may have been violently stabbed tonight and may not see the morning, spare a thought for Daphne’s husband, her sons, sisters and parents whose hopes continue to struggle under the weight of all our fears.